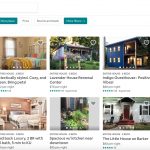 Lawrence city commissioners indicated Tuesday that they are interested in making significant changes to the way the city handles certain Airbnb properties and other short-term rentals.

As part of its work session Tuesday, the commission discussed replacing the recently established permitting process for whole-home short-term rentals, where the property owner lives elsewhere. As currently set up, the permits run with the land and could remain in place permanently, even when ownership of the property changes.

The short-term rental regulations were created last year, but in March of this year, the commission expressed concerns about the permitting process and voted to defer action on the whole-home permits on their agenda in order to consider major questions about how the properties should be regulated and how they might affect the city’s affordable housing shortage.

Commissioners reiterated Tuesday that they had serious concerns with whole-home short-term rentals and were interested in looking at other methods of regulating such rentals. They did not rule out prohibiting whole-home rentals, and staff will bring back options and recommendations at a future meeting. Those will include the option of creating a framework for a licensing program that is tied instead to the rental operator.

Commissioner Stuart Boley said he was concerned about taking the activity of transient accommodations, which has historically been concentrated in commercial areas, and dispersing it into the city’s neighborhoods. He said people move into neighborhoods to live in a residential area, not to live next to a property that is functioning as a hotel. He also said he was worried that whole-home short-term rentals take homes out of the city’s stock of affordable housing. He said he wasn’t sure the special use permit process addresses those concerns and that the city needed to provide predictability for property owners who apply for the permit.

Commissioner Matthew Herbert, who operates a property management company, said that people have personal property protections and an expectation for the city’s permitting process to be consistent. Herbert said the city could not live in a bubble by pretending such rentals didn’t exist and needed to find solutions to make it work in the community. He also said Lawrence is a city that believes in being a tourist attraction and benefits from the outside dollars those tourists bring the city, and that short-term rentals allow the city to house more visitors, especially during large events when hotels are full.

But Commissioner Leslie Soden said that while tourism is an important part of the city’s economy, “it’s not tourists first and residents second.” She said whole-home short-term rentals are contributing to the city’s affordable housing shortage, and that she hadn’t become a commissioner to take care of tourists, but to help people who can’t buy houses or who can’t make a living wage.

Vice Mayor Jennifer Ananda said she was concerned about corporate ownership of such properties, which has been happening in other cities. She said the permitting process, which notifies neighbors, was chosen in part because the commission wanted neighbors to have a say in the process. However, said she does not think Airbnb is going away and she thinks the city needs a consistent process for whole-home rentals.

Currently, about 30 property owners have applied for such a permit, which allows them to rent out the property for less than 30 days at a time, and dozens more homes in Lawrence are listed on online platforms such as Airbnb. The city has a separate and more permissive licensing process for short-term rentals where the homeowner lives at the property and typically rents out just a room or an accessory dwelling unit.

• Reviewed the city’s draft 2020-2024 Capital Improvement Plan. The plan includes about $62 million in projects and purchases for next year, which will be finalized as part of the city’s budget process this summer.

• Reviewed a cost-benefit analysis of a wind energy agreement that Westar Energy previously offered the city, which the city was criticized for not accepting. The consultants, Black & Veatch Corporation, completed the analysis and accompanying energy assessment, which determined such an agreement would have saved the city more than $100,000 annually based on the parameters of the agreement and the city’s energy use.