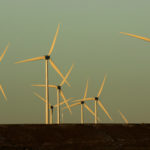 After not accepting a potential wind energy agreement last year, city leaders will look more closely at how much money the city might save by switching to wind energy.

As part of its work session Tuesday, the Lawrence City Commission will review a cost-benefit analysis of a wind energy agreement that Westar Energy previously offered the city and the city was criticized for not accepting. The consultants, Black & Veatch Corporation, completed the analysis and accompanying energy assessment, which determined such an agreement would save the city more than $100,000 annually based on the parameters of the agreement and the city’s energy usage.

Last year, Westar provided the option for some of its large-demand customers, including Lawrence, to purchase wind energy at a fixed rate for the next 20 years. Westar had 200 megawatts of wind power available from the planned Soldier Creek Wind Farm that will be operational by the end of 2020, according to a news release from Westar at the time.

The analysis looked at various participation levels, and determined the best scenario would be for the city to contract for 8 megawatts of power, which would have saved the city about $117,000 in 2018. The report notes that there are other factors the city should consider when contracting for energy, including how its energy needs are expected to change in the coming years, how the plant compares to similar Kansas wind farms, and the potential impact of city‐owned energy generation such as solar, among other factors.

The reservations of wind energy Westar offered were available on a first-come, first-served basis, and Douglas County, Manhattan, the University of Kansas and Kansas State University were among those to sign wind-energy agreements with Westar. Some Lawrence residents asked why the city didn’t take the offer, especially given that the rate was cheaper than what the city was paying.

Municipal Services and Operations Director Dave Wagner responded at the time that the city had been in the process of reviewing Westar’s offer but had not been able to determine whether it was a good idea before all the wind energy was spoken for. Wagner said that because the city’s energy needs and use are complex the city was working with Black & Veatch to conduct the cost-benefit analysis of the proposed Westar contract.

A city staff memo to the commission states that now that the cost-benefit analysis and energy assessment is complete, the report can help the city make well-informed decisions about future renewable energy opportunities.