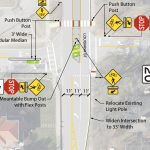 • July 2 — Commission votes to defer construction of one bike boulevard, consider less expensive options for other

City leaders will soon consider whether to move forward with Lawrence’s first bike boulevards, even though the project is significantly over budget.

As part of its meeting Tuesday, the Lawrence City Commission will again consider approving the final conceptual designs for the 21st Street and 13th Street bicycle boulevards and a potential $250,000 increase to the project’s budget. In June, commissioners deferred taking action on the project, requesting instead to review the project’s finances to see whether one of the two boulevards could be delayed to keep the project within budget.

If approved, the budget increase would bring the total cost of collecting public feedback, designing and constructing the boulevards to $717,000, according to a previous city staff memo to the commission. The memo states that the budget overage is due to intensive safety improvements at the intersection of 21st and Louisiana streets, extensive public engagement regarding the project, and that these are the city’s first bike boulevards and the city does not have accurate historical costs.

At the commission’s meeting in June, Mayor Lisa Larsen said although she supports bike boulevards, she was really concerned about the increased cost and interested in funding one of the boulevards and putting the other back on the list to potentially fund in the future. Because the two bike boulevards are tied to multiple funding sources and bond issues, Engineering Program Manager Amanda Sahin responded that the project’s finances would need to be reviewed to determine how to separate out the funding.

Specifically, the commission wanted to see what steps would be necessary to delay the 13th Street bike boulevard and reallocate its funding to the 21st Street boulevard, thereby keeping within the original budget.

City staff is reporting back that bonds for the 13th Street project have already been sold, and reallocating that funding to the 21st Street project instead would require a legal process that would call for additional time and legal fees, plus the possibility of the city incurring duplicate issuance and closing costs. An estimate for how much that process would cost is not provided. City staff does not recommend reallocating the funding if the commission desires to undertake the deferred project in 2020 or in the near future.

City staff is recommending going forward with both boulevards and drawing the additional $250,000 from funds allocated for sidewalk, bicycle and pedestrians improvements for 2019, which has $400,000 of uncommitted funds for 2019, according to a memo to the commission. City staff notes that there are two other projects — the design of the downtown segment of the Lawrence Loop and a Safe Routes to Schools project — that also require additional funding, and staff provided four options for spending the uncommitted funds.