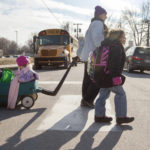 In this photo from Jan. 14, 2015, Amanda Bryson walks home from Woodlawn Elementary School with her daughter Arianna, 7. Bryson was also pulling a wagon with her 4-year-old twins, Sasha and Trenton.

The local effort to provide elementary and middle school students with safe pedestrian and bicycle routes to schools will benefit from a $500,000 infrastructure boost in the coming year.

Nick Voss, project engineer for the Lawrence Public Works Department, said the city has received a $394,000 transportation alternatives grant for its Safe Routes to School program from the Kansas Department of Transportation. The city will match that with $98,500 of city funding to make sidewalk improvements and add more flashing beacon lights at crosswalks that don’t have crossing guards. KDOT is currently reviewing preliminary plans on how both sets of funds will be used, Voss said.

The grant allows the city to install sidewalks in older neighborhoods where they were not installed on both sides of streets as city code now requires, Voss said. Work should start on the sidewalks in the spring of 2018, he said.

It is the second such KDOT-administered Safe Routes to School grant the city has received. KDOT administers the federal pass-through dollars provided to enhance school route safety for elementary and middle school students, Voss said. In 2015, the city received a $189,000 grant, which it matched with $47,000. The city used the first grant to install 10 flashing crossing beacons throughout Lawrence as well as to upgrade sidewalks.

Ron May, safety and transportation director for the Lawrence school district, said local Safe Routes to School efforts started in 2014 as a collaborative community effort, with the city, school district and Lawrence-Douglas County Health Department taking the most prominent roles. The starting point was determining the best routes, he said.

“The way safe routes work is a tiered process,” he said. “We brought in stakeholders from each school and neighborhood because they know their neighborhoods and walking patterns best. We honed what they presented to decide where the best routes were.”

The routes are updated with new development and changing traffic patterns, May said.

There is always a need to install more sidewalks, and at a cost of about $30 per linear foot to construct them, the grant money is welcome, Voss said. KDOT is expected to invite another round of applications for transportation-enhancement grants in 2019, and the city will probably apply, he said.

Data collection includes surveys of elementary and middle school students that provide numbers of how many students are walking or riding bicycles to school, Bryan said. Although data from the fall semester survey has not yet been processed, the surveys do show the number of Lawrence elementary and middle school children walking or biking to and from school increased from 14.3 percent in 2014 to 15.7 percent in 2016.

The health department is promoting that with its involvement in two other components of the Safe Routes to School program: education and encouragement. The big annual encouragement event is the Walk to School Day that is scheduled for Wednesday, weather permitting. It was rescheduled from Oct. 4 because of a forecast of rain. According to the health department’s website, 1,500 students walked to elementary or middle schools during the 2016 Walk to School Day.

“That’s the big event for getting the word out,” Bryan said. “A lot of times, entire families walk to school together.”

Bryan and Denise Johnson, the Lawrence school district’s assistant director of health and wellness, said the health department and school district promote walking and biking to school as part of a healthy lifestyle.

“We want to encourage students and parents to walk to school often, not just on one day,” she said. “We want families to take time to walk to school, enjoy nature, spend that time together and get the heart rate up.”

Safety is the focus of the Safe Routes to School’s education component, Bryan said.

“Children need to learn how to walk and bike safely,” he said. “They have to understand how a crosswalk works and how traffic moves.”

To help with that educational piece, the health department provided the school district a fleet of bicycles to teach bike safety to the district’s fourth- and fifth-graders. Johnson said that fleet and a second one added through a grant from the Douglas County Community Foundation are cycled through the district’s elementary schools.

“One challenge for some communities is the trend of building schools on the edge of town where they reinforce a motorized lifestyle,” he said. “Because the Lawrence school district is so committed to neighborhood-based schools, schools are within walking and biking distance.”