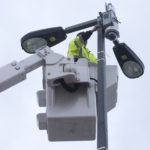 “It is probably past time that we had something like this,” Khatib was quoted as saying in a 2012 Journal-World article.

Since the Oct. 1 triple homicide at the intersection of 11th and Massachusetts streets, the idea of downtown surveillance cameras has come up in more informal conversations. However, the police department says there are currently no plans to add cameras.

Lawrence police do still have surveillance cameras at the intersection of Clinton Parkway and Wakarusa Drive, Officer Derrick Smith said.

Rather than recording live video, those cameras — installed in 2011 — were set up to scan for license plate numbers of vehicles suspected of being used in a crime and send notification to police if the plate is spotted.

The police department also installs temporary cameras to oversee areas where large crowds are expected, such as Final Four celebrations downtown, Smith said. He said those cameras are removed once the event is over.

As for more cameras?

The Oct. 1 shootings happened about 1:40 a.m. at the intersection of 11th and Massachusetts streets, where, police say, a flurry of gunfire erupted from a physical altercation. A Shawnee woman and two Topeka men were killed by the gunfire, and two other Topeka men were hurt.

Three Topeka men have been arrested and charged in connection with the crimes. Their court cases are pending, with a joint preliminary hearing scheduled for Dec. 7.

The question of whether police need more presence downtown and, if so, what that should look like has come up in conversations including by residents running for City Commission as well as Journal-World readers.

The University of Kansas campus has had public surveillance cameras since 2005 — and now has hundreds of them, enabled by chunks of funding in the hundreds of thousands of dollars.

An initial round of cameras for KU residence hall parking lots came with a price tag of $280,000, the Journal-World reported in 2005. KU continued adding cameras in later years, including a $250,000 expansion in 2012 focusing on outside areas like parking lots and along Jayhawk Boulevard.

KU now has more than 700 cameras, The University Daily Kansan reported this fall.

In 2012, the Lawrence Police Department had hoped to use $46,800 in U.S. Justice Department grant money to install up to six permanent surveillance cameras at intersections downtown. Khatib noted at the time that video footage captured by a private downtown security camera had helped solve at least one previous downtown shooting case.

The City Commission said it would not accept the grant and permit the cameras until a policy for their use was developed and presented.

Multiple public forums on the issue brought out debate over whether the cameras were a good idea or an unreasonable intrusion on privacy. Critics included representatives of the regional chapter of the American Civil Liberties Union.

Lawrence’s new police chief, Gregory Burns Jr., was sworn in the day after the triple homicide on Massachusetts Street.

Burns has said he doesn’t plan to make sweeping changes to the department or propose major initiatives right away. He wants to get to know the department and the city first.

However, in a recent interview with the Journal-World, Burns said he generally supports the idea of public surveillance cameras.

In his decades with the Louisville, Ky., police department, Burns had a lot of experience with them.

“Video footage could make the difference between us solving a crime and not solving a crime, and that has happened a lot,” Burns said. “It’s very shocking when you actually see somebody getting murdered right on video. And because of cameras that were in Louisville, I actually was able to see that.”

Such footage can be “invaluable” at trial as well, Burns said.

“It’s easy to say, ‘I didn’t do this,'” he said. “But if you’re right there on camera shown killing somebody, it’s just real hard to deny that.”

Burns estimated Louisville had upward of 100 cameras installed downtown and in other high-crime or high-traffic areas. Louisville also had a “real-time crime center” where someone was always monitoring the cameras.

Obviously, Burns said, not every city has the budget or the need for that kind of camera program. He acknowledged that the Big Brother argument put forth by some citizens also is worth considering.