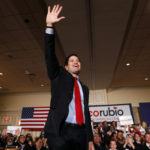 Rubio’s campaign confirmed Thursday that it will have a Friday morning event in Topeka and a Friday evening event in Overland Park.

The event in Topeka starts at 10:15 a.m., at Forbes Field, in the Million Air hangar.

The Overland Park event is at 6:30 p.m. at the Marriott hotel and convention center.

GOP rival and Texas Sen. Ted Cruz had a campaign stop Wednesday evening in Olathe and a rally at nearby Johnson County Community College.

Democratic candidate Bernie Sanders was having a rally Thursday evening in Lawrence.

? Find out the locations and times for the Kansas Democratic and Republican caucuses Saturday in Douglas County