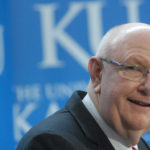 In a press conference in December, Chancellor Robert Hemenway announced he would step down from his post effective June 30, 2009.

The chancellor at a glance

Books published: “Zora Neale Hurston: A Literary Biography,” 1977. Contributed to several others, both as an editor and by writing forewords, chapters and introductions.

Salary as chancellor: Three months ago, the Kansas Board of Regents gave Hemenway a 2.5 percent pay raise, taking his potential salary compensation to $340,352. Of Hemenway’s compensation, $267,177 is provided by state funds. The remaining $73,175 represents the maximum he can receive from the KU Endowment Association. When he was hired in 1995, Hemenway was paid a base salary of $160,000 — plus the chancellor’s residence, an $18,500 residential spending allowance, a $15,000 expense account and a leased vehicle.

Kansas University Chancellor Robert E. Hemenway plans to teach and write a book on intercollegiate athletics once he leaves his post on June 30.

Hemenway, who joined the university in 1995, said there is no “good” time to step down.

“There is never a perfect time to step down from a job like this,” said Hemenway, 67, in a Monday morning press conference, announcing news that surprised many. “But in light of where KU is today and the accomplishments of the past 12 months, it is about as good as it gets.”

Hemenway presided over a time of growth and prosperity for KU. It reported a record enrollment figure this fall — 30,102 students at its Lawrence, Edwards and KU Medical Center campuses. That is up from 27,639 in fall 1995.

Hemenway also shephered through an agreement to separate the KU Hospital from state status to a public authority. He began a process to earn National Cancer Institute designation for the university’s Cancer Center, making that the university’s No. 1 priority in 2005.

He was also criticized in some corners for the way he handled the renegotiation of the affiliation agreement between KU Medical Center and KU Hospital last year. Ultimately, however, an agreement that was amenable to both parties — and also involved St. Luke’s Hospital — was reached.

He also achieved an increase of more than 54 percent in minority faculty and a 33 percent increase in women faculty during his tenure.

Donna Shank, chair of the Kansas Board of Regents, said in a statement, “The people of Kansas and KU alumni worldwide have benefited tremendously from Bob Hemenway’s service. The accomplishments of the university during his firm and progressive leadership speak for themselves. KU has grown in size, strength and reputation.”

Shank said the regents would appoint a committee to begin a national search for Hemenway’s successor.

Peterson said the regents will discuss the search process during its monthly meeting next week. “It (appointing an interim) is something the board will consider if it makes sense with the search plan that they outline,” he said.

Hemenway said he wasn’t worried about finding a qualified successor.

“I congratulate Bob on his great successes in helping the University of Kansas to be one of the premier universities in America,” said Gov. Kathleen Sebelius in a statement. “The opportunities for the future have been set with record enrollments, nationally top-ranked programs in numerous fields, and a research engine that is generating critical economic activity and knowledge.”

In his first year after leaving the chancellorship, Hemenway said he intended to work on a book about intercollegiate athletics and American values, returning to the classroom in 2010.

“KU has been fortunate for the past 14 years to have had such a quality leader as Chancellor Hemenway. Our students will continue to benefit from his decision to remain here on the faculty,” Perkins said in a statement provided to the Journal-World. “The chancellor has been very supportive of the Kansas Athletics program, recognizing the value of intercollegiate athletics to KU but always in the context of education, integrity and NCAA compliance.”

Perkins said he counted the chancellor as a friend.

On Monday, the chancellor highlighted achievements of his tenure including the pursuit of National Cancer Institute designation for the KU Cancer Center, record enrollment levels, increased research funding and a national basketball championship.

Richard Lariviere, provost and executive vice chancellor, said news of Hemenway’s retirement came as a surprise to him.

“Bob has a reputation among his peers as a really great university leader,” Lariviere said. “One of the reasons I took this job was his reputation.”

Lariviere, now in his third year as provost, said he was able to learn a lot by watching Hemenway steer the university through good times and difficult ones.

“I learned that when you place an institution’s well-being ahead of your own, you sometimes have to take licks that are hard to take,” he said. “But that’s who he is.”

Lariviere declined to discuss whether he was interested in becoming KU’s next chancellor, saying he was still reeling from Monday’s news and preferred to keep the focus on Hemenway.

The chancellor’s announcement also comes at a time of global financial crisis, and state funding to the university is likely to be slashed in coming months.

Hemenway acknowledged the impending budget situation, saying it would likely be a difficult time for someone to take over, but he was confident that KU’s status as a great university would help attract quality candidates.

He said that financial matters would likely consume most of the remaining time he had left on the job.

“I’m not leaving this office with any regrets,” he said. “I’ve had a heck of a good time being chancellor.”

Hemenway’s news reverberated across the Lawrence campus and beyond Monday.

“It’s one of those bittersweet times,” said Barbara Atkinson, executive vice chancellor of the KU Medical Center. “He has done such an incredibly amazing job for KU.”

Looking at the Medical Center, she said, it’s a “totally different place” than it was 14 years ago.

She praised Hemenway’s efforts to separate the KU Hospital into its own entity and for focusing on pursuing NCI designation for the KU Cancer Center.

“We could never be where we are today without him saying that was the No. 1 priority of the university,” Atkinson said.

“Quite frankly, it’s a loss for me personally as well as professionally,” Page said.

“He’s been an advocate for everything we’ve tried to accomplish,” Page said. “He will absolutely be missed.”