State lakes filling with sediment as they get older, hurting quality

Many of the reservoirs in the state used for drinking water are filling up with sediment, which reduces their capacity and can harm the quality of the water.

“This is potentially a huge problem that is going to confront the state in the next 20 to 40 years,” said Edward Martinko, director of the Kansas Biological Survey.

There are 93 reservoirs in Kansas used for drinking water for approximately 60 percent of the state’s population.

Those lakes are an average of 51 years old.

Big lakes – such as John Redmond Reservoir, Perry, Tuttle Creek and Cheney – have lost anywhere from 23 percent to 30 percent of their capacity to hold water.

Clinton Lake’s storage capacity has only decreased by six percent due to sedimentation, but even that figure is greater than was originally projected, Martinko said. 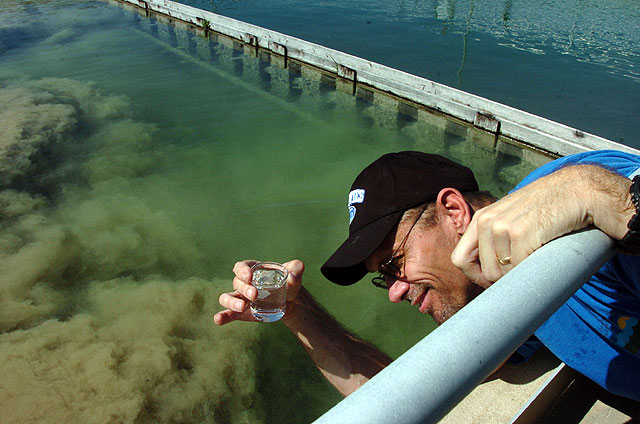 David Brewer, a water quality technician, gathers a water sample from one of the city's water treatment plants.

“The bottom line is that the situation with respect to Clinton is that it has been sedimenting in faster than has been anticipated. The original life expectancy was 100 years, and now it is projected at only 70 years,” Martinko said.

Many smaller lakes have lost 50 percent. Mission Lake near Horton has silted in so much it can’t be used anymore as a public water supply.

“This is not a sleeping giant anymore,” said Horton Mayor Dale White.

The Kansas Water Office is seeking legislative permission to use $400,000 to conduct a pilot project to determine how these lakes can be rehabilitated.

Tracy Streeter, executive director of the Water Office, said the upkeep of lakes is necessary “just like we fix old streets and sewer lines.”

Martinko said lakes experience a life cycle where sediment from runoff accumulates in the lake bed. This increases the nutrient level in the water leading to more algae blooms, taste and odor problems in drinking water and will limit recreational uses. The sediment deposit also reduces the water supply yield of the lake.

The state needs to act now because the potential cost of rehabilitating lakes is staggering, he said.

For example, he said, it is estimated that nearly 3 million cubic yards of silt fills in Lake Perry every year. Dredging typically costs about $5 per cubic year, bringing the annual bill at Perry to about $15 million per year just to keep up.

“It’s important for us to start doing pilot project studies to deal with some of these issues and look for the most cost-effective method,” Martinko said.

In Horton, residents are having to rely on wells because of problems with their lake. They have approved a $4 million bond issue that would double their water bills in order to dredge the lake that was built in the 1930s.

White, the Horton mayor, said he hopes to partner with the state to be part of the pilot project.

Rep. Tom Sloan, R-Lawrence, has been at the forefront in the Legislature for trying to address the issue.

“The quantity and quality of water available 100 years from now for the people of Kansas depends on actions we take now to preserve our drinking water supply lakes,” Sloan said.

“Reducing the rate of siltation is important, but so is addressing the sediment already present in the lakes. The sediment affects water storage capacity, water quality, and flood control and recreation opportunities,” he added.

Sloan spearheaded legislation that takes effect in two years that essentially will move fees paid by water suppliers from the state’s general fund to the state water fund, which can be used on projects such as dredging lakes.

But until that money starts kicking in, state water officials are asking to use some existing water funds to do the pilot project.

Martinko said there is no time to waste.

“Fifty years ago, people thought ahead to build these lakes, now we have to do something to keep them up,” he said.