The water in Clinton Lake — water that eventually flows through a city treatment plant and the taps of Lawrence residents — is increasingly dirty.

Now there’s a plan afoot to slow the flow of soil, waste and chemicals into the lake. Its measures could change the face of farming and development across a four-county area.

“We don’t like our water to taste and smell icky,” she said. “It’s very expensive to get those problems resolved. It’d be easier and less expensive in the long run to be proactive.”

That’s why the alliance has taken the lead among a coalition of state and local agencies in formulating the plan, called the Upper Wakarusa Watershed Restoration and Protection Strategy.

The plan relies heavily on current regulations to clean up the watershed. But it also proposes new measures: encouraging “clustered” rural development, discouraging new lakefront building, and developing incentives to promote organic farming along the watershed.

Quietly in recent weeks, advocates of the plan have been approaching area officials to build support.

“Plans like this really need to be implemented at the local level,” said Deb Baker, who wrote the plan for the alliance and now works in the Kansas Water Office. “We really want to protect the water in the lake. Land-use decisions are going to be key to that.” 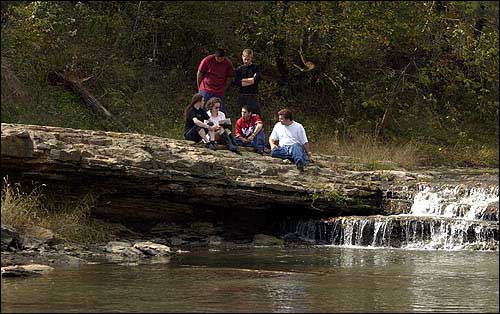 Alison Reber, executive director of the Kaw Valley Heritage Alliance, center in white shirt, talks with students from Free State High School about the river water quality below Clinton Dam on the Wakarusa River. The alliance is leading the charge to create a plan for slowing the flow of sediment, waste and chemicals into Clinton Lake.

Clinton Lake is a relatively young reservoir. It was filled between 1977 and 1980, and is fed by the Wakarusa River and a series of streams — all of which make up the watershed — extending west into Shawnee, Osage and Wabaunsee counties.

The city of Lawrence has state-granted rights to 4.86 billion gallons of water a year from Clinton Lake, plus another 8.15 billion gallons from the Kansas River. For now, that’s more than enough — in 2001, the city’s 28,000 water customers consumed 4.46 billion gallons, about 56 percent of capacity.

“Clinton Lake is a major source of water to the city,” City Manager Mike Wildgen said. “Its quality, its quantity, is of major importance to the city.”

But, officials say, that quality is declining.

According to Kaw Valley’s report, “primary concerns are excess inputs of sediment, phosphorous, nitrogen and fecal coliform bacteria from the watershed and stream banks, into the river and lake.”

The reason: Loose soil from construction sites, pesticides from cropland and waste from cattle are running off into the water; there are 33,000 head of livestock in the watershed, compared with 25,000 people.

The Kansas Department of Health and Environment is already closely monitoring both the watershed and the lake for fecal coliform and “eutrophication,” the level of foreign nutrients in the lake. 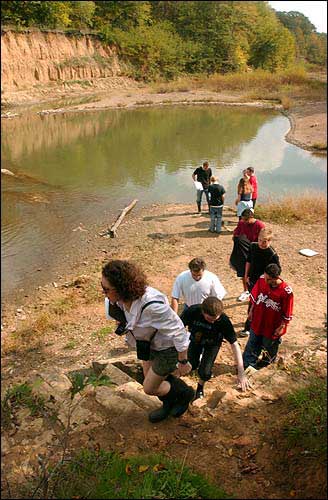 “It’s a source of drinking water for two public water supplies — city of Lawrence and a group of water districts that take water out of Clinton Reservoir,” said Don Snethen, chief of the Watershed Management Section for the state’s water bureau. “It’s part of our effort to assure Kansans have water that meets water-quality standards and is suitable as a public water-supply source.”

The water will be treatable, and safe, even as it gets dirtier, Wildgen said. But the process will become more cumbersome and costly as time goes on.

“You can treat it with chemicals and you can manage it,” he said, “but sometimes that’s expensive.”

The report suggests a variety of actions to reverse the trends at Clinton. Restoring stream banks and riparian areas in the corridor is a priority, along with changes in management of grasslands, livestock waste, wastewater treatment systems and suburban growth management.

Reber said those steps, for now, will be voluntary. Some of the land-use proposals, however, could become requirements.

“Rural landowners and agricultural producers will be the most important participants in restoration and protection of the watershed,” the report said. “Their collective individual actions in response to this plan is a critical element of its success.”

Their enthusiasm remains to be seen, however.

“The farmers and ranchers of this organization are big believers in voluntary-based incentives when it comes to efforts related to environmental protection,” said Mike Matson, a spokesman for Kansas Farm Bureau.

“We just find they (voluntary measures) are more effective,” he said. “It’s easier to convince someone to do the right thing and allow them to come to that conclusion on their own, than it is for government to walk in and say, ‘You will do it this way.'”

Douglas County Commissioner Charles Jones is one of the local officials approached in recent weeks about the plan. He said officials might not have much choice but to take action. Officials will try to bring about those measures with the least pain possible, he said.

Members of the alliance say the report is based on research done by a variety of state and federal agencies.

“Everybody’s pretty much come up with the same conclusion on what needs to be done, in their separate research documents, to protect the Wakarusa and Clinton Lake,” Reber said.

“Basically, we need to be very careful with the amount of development that happens and the way development happens,” she said. “We need to keep the soil out of the lake.”