Perry ? Perry Lake is filling up — and not just with water.

Since the reservoir opened in 1969, sediment runoff has taken away 23 percent of its water storage capacity, according to a new study from the U.S. Geological Survey and the Kansas Department of Health and Environment.

“That’s the inescapable consequence of damming up a body of water,” said Kyle Juracek, hydrology researcher for USGS.

The study, conducted during the past two years, shows Perry Lake receives more sediment than any other lake in Kansas studied so far.

A study has not yet been done at Clinton Lake.

Perry Lake is not in danger of disappearing just yet, but it is a situation that caught the attention of researchers, Juracek says.

The U.S. Army Corps of Engineers built the lake for a 100-year lifespan, Juracek said. It is, however, filling with sediment faster than the corps expected.

“It’s still going to be a viable lake for several decades,” Juracek said. “At the end, there will still be a lake; it’s just going to depend on how much storage capacity there will be.”

But sediment runoff already has taken a toll on the lake. In the late 1980s, it caused the closure of two parks, Paradise and Sunset Ridge, located at the end of the lake where the Delaware River enters and dumps the largest amount of sediment, Funk said. 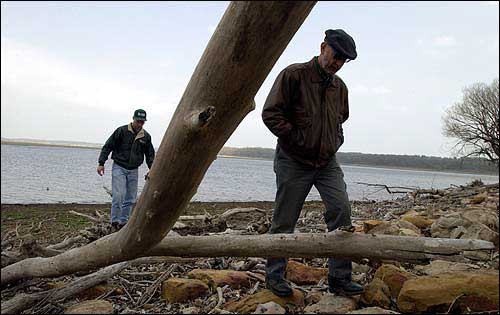 Kyle Juracek, left, hydrology researcher with the U.S. Geological Survey who worked on a sediment study that shows Perry Lake shrinking, and Frank Funk, operations manager at Perry Lake, cross a shoreline. They reviewed sediment-filled sections of the lake Friday.

Sediment “silted in” the boat ramps there, causing them to be shut down. That, in turn, dramatically reduced the number of visitors to the parks, Funk said.

The sediment is carried into the lake by the Delaware, mostly from farmland runoff in its northeast Kansas basin.

The situation was not serious enough to require immediate action to reduce the sediment deposits, and there were no plans to clear what had built up, Juracek said.

Tests also showed the lake-bed sediment indicated eutrophic, or nutrient-rich, conditions have existed throughout the lake’s history. Those conditions could result in excessive algae growth, which can lead to taste and odor problems for water suppliers, as well as aesthetic problems for recreational users.

The state of Kansas has the lake’s water under contract from the U.S. Army Corps of Engineers through the Kansas River Water Assurance District No. 1 in order to supply cities including Lawrence, Olathe and Bonner Springs. The lake also helps provide water to much of Johnson County and industries such as Procter & Gamble and Colgate-Palmolive in Kansas City, Kan.

Traces of other elements and substances, such as arsenic, chromium, copper and nickel are also present.

Fingers of sediment are visible in some areas around the lake.

Yet the water quality was considered good and was not a danger to the public, said Tom Stiles, KDHE’s chief of watershed planning.

“What we found was pretty typical of lakes,” Stiles said of the presence of chemicals. “It is actually a good-quality lake.”

The lake would be tested for chemicals every few years, Stiles said. If problems develop, steps would be taken to target land management practices in the basin.

“Reservoir sediment can produce a wealth of information about past and present conditions, and can allow us to assess future changes that may be due to human activity,” Juracek said.