Surprise, we’re out of drinking water.

A new report suggests city and state leaders should spend more time now thinking about water issues as Clinton Lake – one of two water sources for the city – ages and fills in with silt.

“This really is a classic ‘pay me now or pay me later’ situation,” Schauner said.

Schauner, who requested the report from the Kansas Water Office, said city and state officials must begin thinking about how they’ll afford to keep aging reservoirs viable as drinking water sources.

One possible solution: a small user fee for water customers.

“The question is, are we going to pay enough now through some sort of relatively painless charge,” Schauner said, “or are we going to wait until 2030 and say, ‘Unless we do something in the next 10 years, we all are going to be thirsty?’

“At that point, the bill would be huge.”

According to the Water Office report, it would cost roughly $1.5 million per year to dredge out all the silt that goes into Clinton Lake each year. If state and city leaders decided to do nothing for the next 20 years, that would be about $30 million worth of dredging, in today’s dollars, to get the lake back to its current condition. 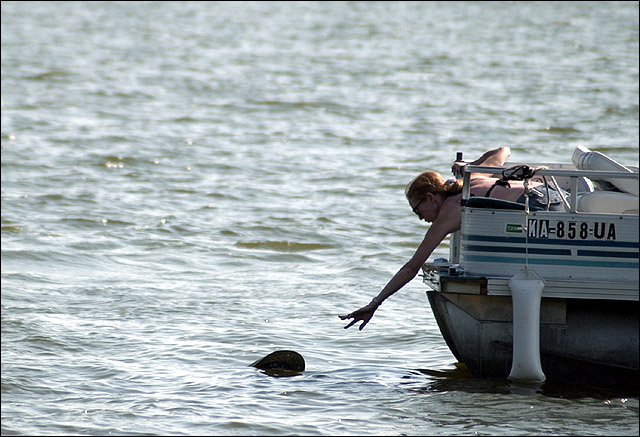 Janet Frakes, Shawnee resident, reaches for her floating straw hat Wednesday afternoon at Clinton Lake. Frakes had just purchased the hat yesterday to keep the sun off her face while she and her husband boated, and she was able to retrieve it successfully.

But Earl Lewis Jr., manager of hydrology and evaluation at the Water Office, said the numbers shouldn’t scare people.

At least, not yet.

Lawrence clearly isn’t in any danger of having a water shortage anytime soon, he said.

“But absolutely it is good that they’re thinking about this now,” Lewis said. “It would be about 35 years from now that our backs could be up against the wall on this, but if we work on it now, we might be able to push that back even more.”

The Water Office report predicted that based on current growth trends and sedimentation rates, 2040 would be the earliest that the amount of dedicated drinking water would fall below the amount of water that Clinton water users are guaranteed through state water contracts. But Lewis said that even then, the shortage would only happen if the state happened to be in a significant multi-year drought.

Lewis, though, agreed that now was the time for state and city leaders to think about how to preserve lakes like Clinton.

“It has been the mantra of engineers like myself that these lakes were only built for a certain life span, so it is not a surprise that sedimentation is happening,” Lewis said. “But when we started looking at this, it is obvious that Kansas is going to be around a lot longer than a hundred years. And it is clear that there isn’t going to be any easy way to get water.

“So we can’t just give up on Clinton Lake because it reaches its design life. We have to treat these lakes like infrastructure. They’re permanent facilities that we’re going to have to maintain as part of our water system.”

¢ According to a 1991 Corps of Engineers survey, Clinton Lake is losing about 296 acre-feet of water storage space per year because of silt flowing into the lake. To put that in perspective, that would be a one-foot-deep pile of dirt roughly the size of 200 football fields.

¢ Water drains into Clinton Lake from a 367-square-mile area that stretches across parts of Douglas, Shawnee, Osage and Wabaunsee counties. A group called WRAPS – Watershed Restoration And Protection Strategy – has formed to work with governments and landowners in the watershed on ways to slow the rate at which silt flows into the lake.

¢ Clinton Lake has only a moderate silt problem compared with other Kansas lakes. Officials with the Kansas Water Office said the most serious sedimentation problem was at John Redmond Reservoir in Coffey County. Officials plan to raise the water level of that lake by about two and a half feet to provide greater water storage capability for the nearby Wolf Creek Nuclear Power Plant, which uses the water to cool its reactors. The raising of the lake is expected to cost about $2 million.

Schauner said he was not sure what that plan should be, but that a small user fee for water customers should be discussed. The fee could be as small as a few cents per month, he said, that could gather interest over the course of the next several years.

Schauner said any solution should have a statewide component. That’s because sedimentation is occurring across the state in reservoirs such as Perry, Milford and Tuttle Creek.

The state currently is setting aside some money for future water issues. Cities and other water utilities for years have paid the state a fee of 3 cents per thousand gallons in exchange for not paying sales tax on the variety of water distribution supplies – everything from pipe to chemicals – that they purchase.

Historically, all that money has gone straight into the state’s general fund. But new legislation, some of it championed by Rep. Tom Sloan, R-Lawrence, will allow some of that money to be earmarked for future water issues.

Lewis said there was plenty of work the state could do now rather than wait until the lakes need large-scale dredging.

A current focus, he said, is stabilizing stream banks so less dirt and sediment flow into the lakes. He said usually the most effective way to do that was to encourage farmers to plant trees and grasses along stream banks, which often means farmers have to give up valuable farm ground.

It may become necessary for governments to provide landowners with some money to carry out those types of projects, Lewis said.