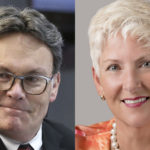 A former Lawrence mayor is attempting to flip the Kansas 45th House District from red to blue, while his opponent says it is important a Republican continues to represent the district.

The 65-year-old Amyx owns the downtown barbershop his father and grandfather once owned. His civic engagement has included serving five years on the Douglas County Commission and 18 years on the Lawrence City Commission. He has been on numerous local boards, including those of Lawrence Memorial Hospital and the Dwayne Peaslee Technical Training Center.

Smith, 59, received a bachelor’s degree from the University of Maryland and a law degree from George Washington University in Washington, D.C. For more than 10 years, she has worked on issues in the Kansas Statehouse, first as an employee of Kansas City Power & Light and then as advocacy counsel of the Sisters of Charity of Leavenworth Health Systems.

Smith says she is a moderate on social policy and a fiscal conservative who would scrutinize all spending proposals. She would support reducing or ending the state sales tax on food.

Amyx said he, too, supports a food sales tax reduction or elimination, but said voters needed to understand that, without a replacement tax, the state would lose $327 million in annual revenue, of which $70 million was allocated to the state highway fund. A solution could be to approve another, less regressive tax, he said.

The two candidates agree the Legislature needs to expand Medicaid under the Affordable Care Act so that low-income residents have access to health care and mental health services. They also agree that the Legislature should comply with a Kansas Supreme Court’s ruling from June and approve during its 2019 session additional K-12 funding for the new school finance bill passed last year. Smith adds that the state now needs to track how school districts perform with the added funding. She would support a campaign to amend the Kansas Constitution to clarify the roles of the Legislature and courts regarding school funding decisions “if it is presented clearly to voters,” she said.

Amyx said he not only supports adequately funding K-12 education, but also wants to ensure vocational schools and higher education have the resources they need because they are critical to the state’s economic growth.

Smith said it was important the 45th District be represented by a Republican, who would attend party caucuses where the daily legislative agenda is set. A Democrat would not get one of the House committee chairs, which decide what bills are heard and brought to a vote.

“I am a Republican, and I will have influence that will serve the entire Lawrence delegation in Topeka in a way that another Democrat cannot,” she said.

Amyx said he would be effective in the House. He said he’s developed contacts throughout the district and state during his years in local government and understands the district’s needs, particularly in areas of infrastructure. A key issue is a state transportation plan the Legislature is slated to consider and fund in 2019.

“We need to make sure the K-10 west leg expansion to four lanes is in the plan,” he said. “It’s critical to the safety of the people of this district. And we need to keep K-10 access to Farmer’s Turnpike for the people who use that road.”

Editor’s note: This story has been updated to correct the number of years Mike Amyx served on the county and city commissions.