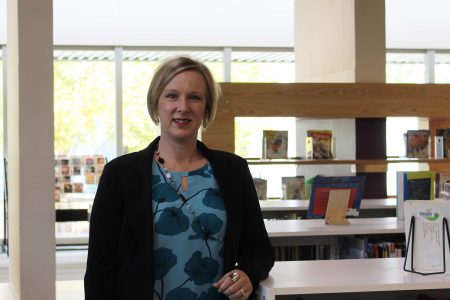 Shannon Kimball, an incumbent Lawrence school board member, stands in the Lawrence Public Library on Monday, Sept. 16, 2019. Kimball is one of five candidates running in the school board election this fall.

While Kimball, who served on a special elementary school facilities task force for the district in 2010 prior to joining the board in July 2011, helped craft the plans for those renovation projects during her two terms on the board, she said she isn’t finished yet.

“We have transformed the majority of our buildings in our district over that time period through the fantastic generosity of our community,” Kimball said. “But we have work left to do.”

Kimball, who is one of five candidates for the Lawrence school board this fall, said the ongoing renovation of Lawrence High School — a $46 million construction project expected to last until the spring of 2021 — is one of the board’s recent projects that she wants to see to the finish line through a third term on the board.

Another ongoing project that she wants to see through is a five-year strategic plan that was approved in June. The school district’s administration is charged with beginning the first steps of the plan this school year.

“I think it’s really important to have board members at the table who understand and are familiar with the details and the planning that has gone into executing these projects,” she said.

Kimball said she had advocated for the plan and she’s excited to now hold the district administration and staff accountable in conducting it.

Additionally, Kimball said she wanted to improve the equity among students. Although the board has worked on the issue during her time, she said it has not improved as much as she would have liked. Some equity issues she wants to work on are decreasing achievement gaps between subgroups of students and addressing discipline and advanced placement disparities among students.

“The impact on students has not moved as far along as it needs to,” she said. “Continuing to advocate for that important work is something that has motivated me to continue serving on the board.”

Outside of Lawrence, Kimball is also the president of the Kansas Association of School Boards, or KASB, an organization representing public school districts in Kansas. She was also recently appointed by Gov. Laura Kelly to serve on the new state council on tax reform.

Kimball said her appointment to the council was important because she has the opportunity to be the voice of public education in regard to how tax policy affects its state funding.

While Kimball is not currently employed, she said she was a “full-time volunteer,” referring to her service on the local school board and KASB. Prior to moving to Lawrence in 2008, Kimball worked as a lawyer in Georgia and then served in a position at the Georgia Department of Education, specifically focusing on education policy.

She and her husband, Dr. Jason Kimball, have two sons and a daughter, who are all enrolled in the school district.

Kimball is one of five candidates running for the four at-large positions on the Lawrence school board that are up for election. The general election will be Tuesday, Nov. 5. Advance voting will start Wednesday, Oct. 16, and the last day to register to vote is Tuesday, Oct. 15.