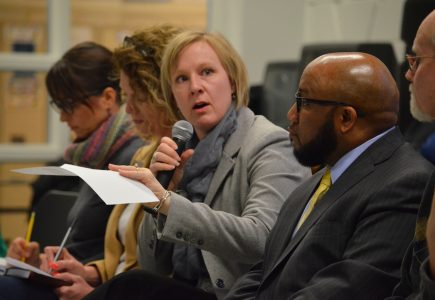 Lawrence school board President Shannon Kimball addresses a question from the audience at the district's Community Conversation at West Middle School on Tuesday, April 3, 2018.

The Governor’s Council on Tax Reform, issued by Executive Order 19-11, will conduct an 18-month study culminating in the council making specific statutory recommendations to state lawmakers. The first meeting of the council will take place Sept. 24 and Sept. 25 at the Statehouse and will be open to the public.

“While Kansas continues to recover from the tax experiment of the prior administration, there’s a need for tax reform designed with adequacy, equity and stability in mind,” Kelly said. “I expect the bipartisan Council to deliver sound strategies and reforms that reflect my desire to keep the state tax burden as low as possible, benefiting all Kansans.”

In 2012, Brownback signed legislation that cut income taxes and eliminated taxes for thousands of businesses, a move deemed by many as unfair and costly. The tax cuts were ultimately largely repealed in 2017.

The council will review state and local finances discussed in the 2019 legislative session, focusing on responding to federal tax law changes, the taxation of groceries as part of sales tax revenue and how to provide targeted property tax relief. It will also look at available room in future budget projections for tax relief.

Former Kansas legislators Steve Morris, a Republican from Hugoton, and Janis Lee, a Democrat from Kensington, will be co-chairs of the council. Both served in the Kansas Senate for at least 20 years. Other members of the council, who can be found here, include representatives from the business community, agricultural, economic development and governmental entities.

Kimball, of Lawrence, who will be serving on the council, hopes public education advocates will pay close attention to the work of the council, noting that tax policy is “of vital interest to our schools.” In addition to her position on the Lawrence school board, Kimball also serves as president of the Kansas Association of School Boards.

“Governor Kelly has identified supporting public investment in education as an important consideration in creating a stable and fair tax policy for Kansas,” Kimball said. “I am excited and honored to contribute my years of experience as an education policy advocate and a member of the board of Lawrence Public Schools to this important discussion.”