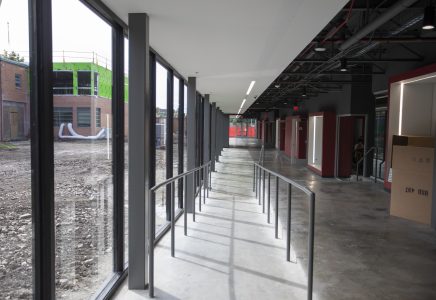 A new portion of Lawrence High School, the "innovation corridor," features large windows that allow in daylight and will soon feature permanent seating to allow students to study and do school work. The exterior of the corridor will eventually feature an outdoor commons area for students.

In a new area of Lawrence High School, students are now seeing a lot of something that they only got a little bit of before — sunlight.

Large glass windows are a major feature in LHS’s new “innovation corridor,” a renovation that aims to bring the decades-old school into the 21st century. The new area was constructed this summer as the first part of a multi-phase renovation of the school, a $46 million project that will eventually affect the entire building.

“Students love these windows,” said interim principal Cynthia Johnson, who recently led the Journal-World on a tour of the renovated portion of the building. “It gives the school a bit of a college feel.”

While the corridor includes full-size classrooms for visual arts, metals, woods, photography, journalism and other such programs, it also features small breakout spaces for students to do schoolwork. The breakout spaces each include a small desk with a television — a bigger screen for students to display the work they’ve done on their school-provided electronic devices.

Along with the new corridor, the school recently began using 36 classrooms that were either renovated or constructed in the place of former classrooms. The school opened those classrooms last week after they were closed off from use for the first four weeks of the school year because of construction delays. 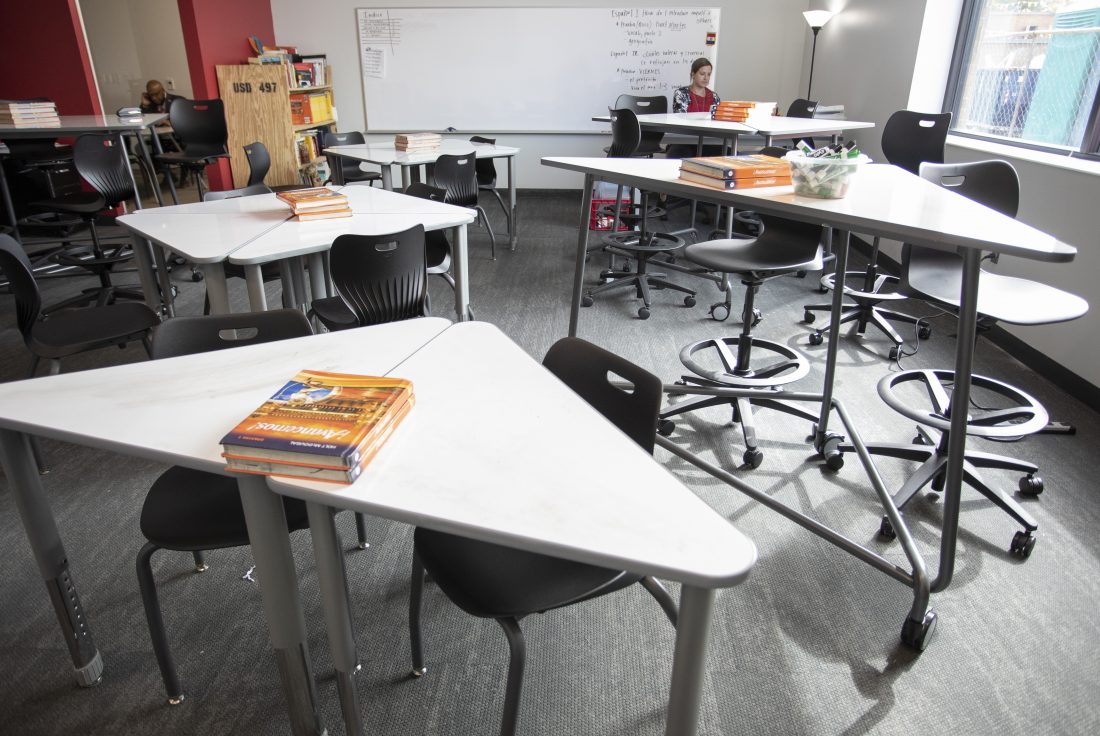 Many of these classrooms feature new desks — some of which are triangular in shape — that can be arranged in many different ways. The desks also come in various sizes, including higher desks that are meant to be used with taller chairs.

Johnson said she sees teachers changing the arrangement of the desks to facilitate different kinds of lessons. During the tour of the building, science teacher Andrew Bricker was teaching an astronomy lesson that involved rearranging the desks in the room into a circle.

“I think it’s powerful to see what you can do with that kind of seating,” Johnson said.

But students aren’t the only ones benefiting from the renovations. Charlie Lauts, an architecture and drafting teacher whose classroom is in the innovation corridor, said she has been enjoying her new room. The classroom, which now looks similar to a computer lab, has 20 architecture drafting tables and a storage room where students can keep their materials. 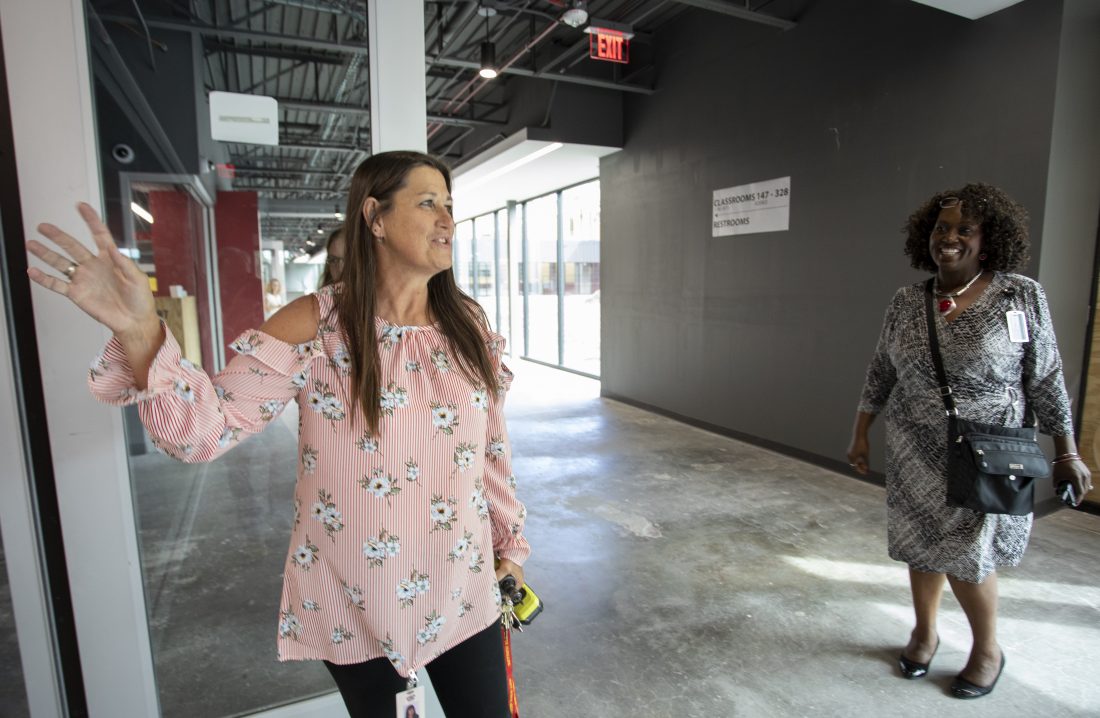 Lawrence High School teacher Charlie Lauts, left, and Cynthia Johnson, interim principal, talk about the features of Lauts new classroom, one of many new classrooms completed in the first phase of a large renovation project at the school.

Lauts’ room and the other new classrooms in the corridor also have large windows just like those in the hallway.

“The room I had before was much bigger, but had no daylight,” Lauts said of her classroom, which has direct access to the corridor. “That’s helpful.”

Additionally, the students can use the corridor itself as their workspace, Lauts said. The school will eventually place permanent seating in the area to make it easier for students to work there.

Although students are now cleared to use the renovated spaces, the final touches of the first phase of the project are not complete. Johnson said the school district still needs to go through a checklist of the first phase with the project’s architects and correct minor issues such as uneven painting.

Additionally, parts of the building will have a slightly different appearance once the whole project is finished. For example, the walls in the innovation corridor are currently dark gray. Johnson said the walls will eventually be painted a lighter color. 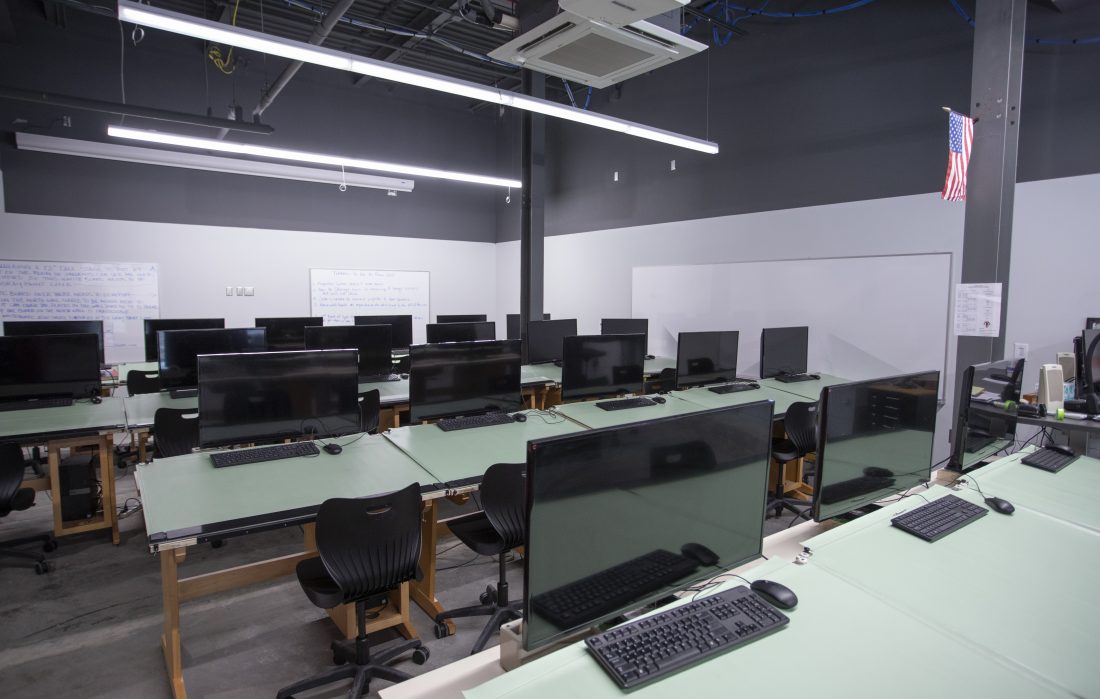 The classroom of Charlie Lauts, architecture and drafting teacher, is one of the renovated classrooms in the innovation corridor. She said the classroom is much better than her previous room.

Currently the school is undergoing construction on phase two of the project, which involves connecting an annex building on the south side of campus to the eastern wing of the main building. Those areas, which will be under construction until the spring, are currently closed off from use.

Johnson also pointed out that one hallway in the innovation corridor is currently closed for other construction phases. She said when the project is finished, students will be able to see from the entrance of the building all the way down to the end of the wing.

Superintendent Anthony Lewis, who was in the building on Friday, said the phased approach is just the reality of a large project like the LHS renovation, which is expected to last 27 months. However, he said students seem to be handling the changes well. He said the new, renovated classrooms are better than what was in their place a year ago.

“I understand this is a phased process and there is much more (to do),” he said. “I went to a couple of classrooms today, and students seem to be enjoying it.” 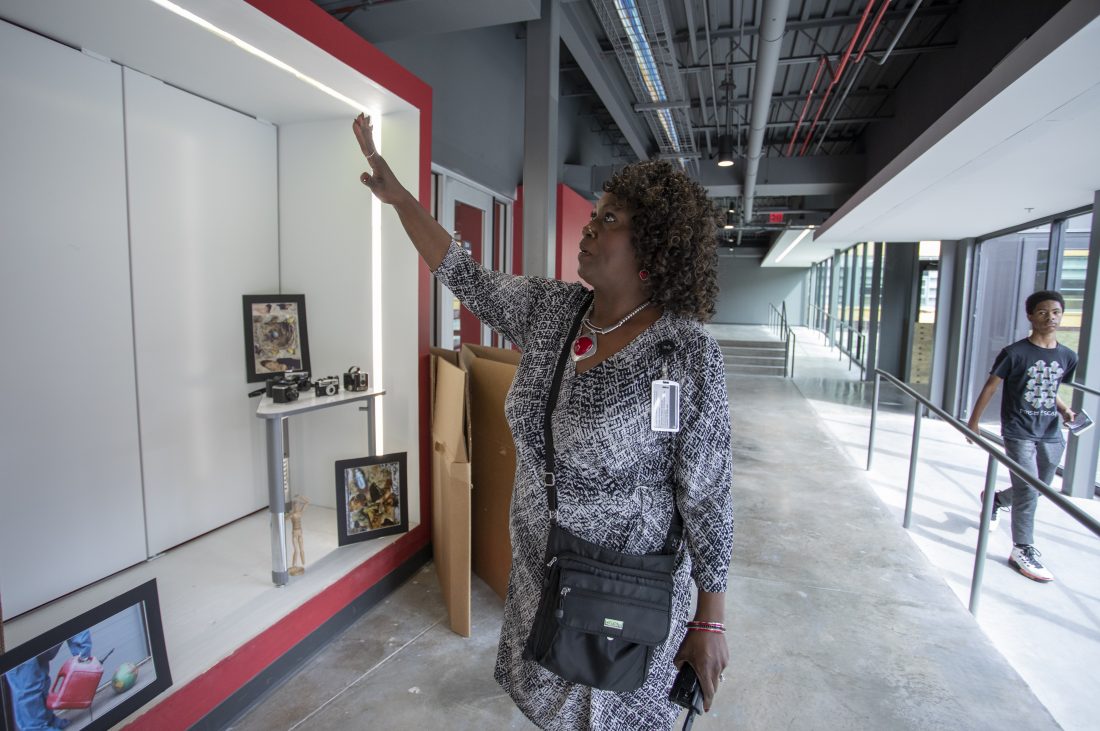 Cynthia Johnson, interim principal at Lawrence High School, points out a large display area that will be used to exhibit work by students in arts classes in a new innovation corridor of the school.

The renovations at LHS are being financed with a $87 million bond issue that was approved by local voters in 2017. Other schools receiving renovations through the bond issue include Free State High School, Liberty Memorial Middle School and West Middle School. The Journal-World will feature stories about those projects at a later date.

Johnson said the school is holding an open house on Monday for parents of LHS students to meet with the school’s teachers and see the renovations in the building. The open house begins at 6:30 p.m. at the school, 1901 Louisiana St.

The general public will be able to see the renovations of all four schools during a “Parade of Schools” event planned for October. An official date for the event has not yet been scheduled, said Julie Boyle, a spokeswoman for the school district.