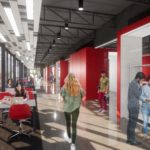 This rendering shows a planned "innovation corridor" that will be constructed at Lawrence High School, as shown in an updated construction plan presented to the Lawrence school board on Monday, Jan. 28, 2019. It will house fine arts, journalism, photography and other such classrooms in one central location.

Visitors to Lawrence High School in 2021 will see an entirely different entrance from what’s there today, according to a representative of the design firm behind the $46.2 million construction project that will break ground after schools let out for summer vacation.

The same principle applies to the rest of the school — “All of Lawrence High is being touched,” Whitney Lang, a senior associate with Gould Evans, told Lawrence school board members at their Monday meeting.

“It’s an exciting day for Lawrence,” Lang said. “It’s not lost on us what an impact a completed Lawrence High is going to have for the overall community.”

Here are some of the items Lang highlighted in a presentation to the Lawrence school board:

• Dining, commons and media. These areas will be combined to create the high school’s new entrance. A large rotunda will connect the shared amenities of the first floor with the classroom spaces of the second floor, Lang said.

“That’s allowing us two spaces to really take advantage of each other,” Lang said. 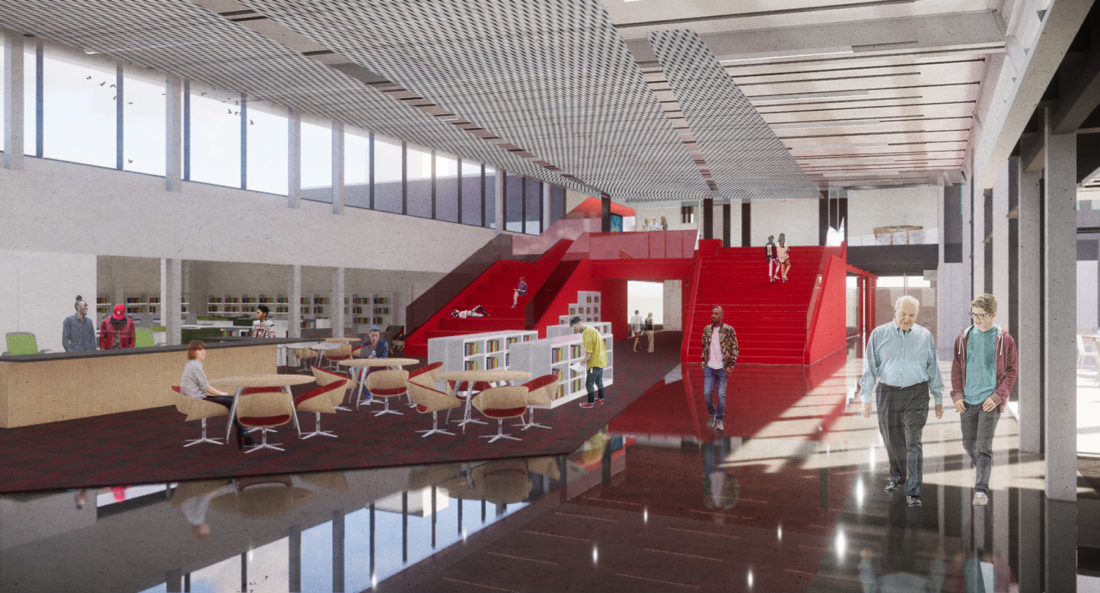 This rendering shows a view of the planned Lawrence High School media center, as shown in an updated construction plan presented to the Lawrence school board on Monday, Jan. 28, 2019. The stairs on the right will serve everyday traffic; the stairs on the left, which hold much deeper steps, were purposely designed more as a place for students to sit down.

• The “innovation corridor.” That entrance will lead into the innovation corridor, which will house classrooms for visual arts, metals, woods, photography, journalism and other such programs in one hallway. Lang said that research shows employers were looking for skills such as creativity, ability to work in groups, presentation skills and others that could be honed in those types of classrooms.

• More privacy for students and staff. The plans include all-gender restrooms, which Lang said would have floor-to-ceiling stalls. Other restrooms are “all-gender ready,” meaning they would not be difficult to convert if the district should decide to do so in the future. Locker rooms would also have private changing rooms and showers available.

• Shuffling space. One piece of the new plan is a redesign of the standard classroom spaces. A survey the firm conducted of about half of LHS students found that 62 percent never use their academic lockers. On the other hand, the firm found that just 29 percent of LHS classrooms meet the district’s ideal classroom size. After construction, most of the core classrooms will be up to size, Lang said in an email response to follow-up questions on Tuesday. The plan will also use some of the freed-up locker space to hold “breakout rooms,” where students can work on group projects.

• A more secure campus. One image in the plans shows about 20 red triangles, all pointing to current entry points at the high school. Construction will cut that number down to four, and the rest would be converted into exit-only doors. The courtyard areas will also be surrounded with security gates.

Classrooms will allow teachers to have visibility of the hallways, but they also have a “zone blue” that is out of view. Some have a solid room that students and faculty could go in if that were ever a necessity, Lang told the board; others have a solid element that could shelter students and staff.

• Health and wellness space. Wellness and athletics facilities, including the culinary program and health classrooms, will be consolidated into one area.

• Boosts for performing arts, both indoors and outdoors. Inside, the performing arts space on the north end of campus will see updates such as an enlarged orchestra room, a dressing room remodel, storage solutions for band and choir, a motorized rig for stage and house lights, plus lighting and finish upgrades throughout. Outside, steps in the new West Courtyard will be positioned at riser height, so that space could also be used for performing arts. 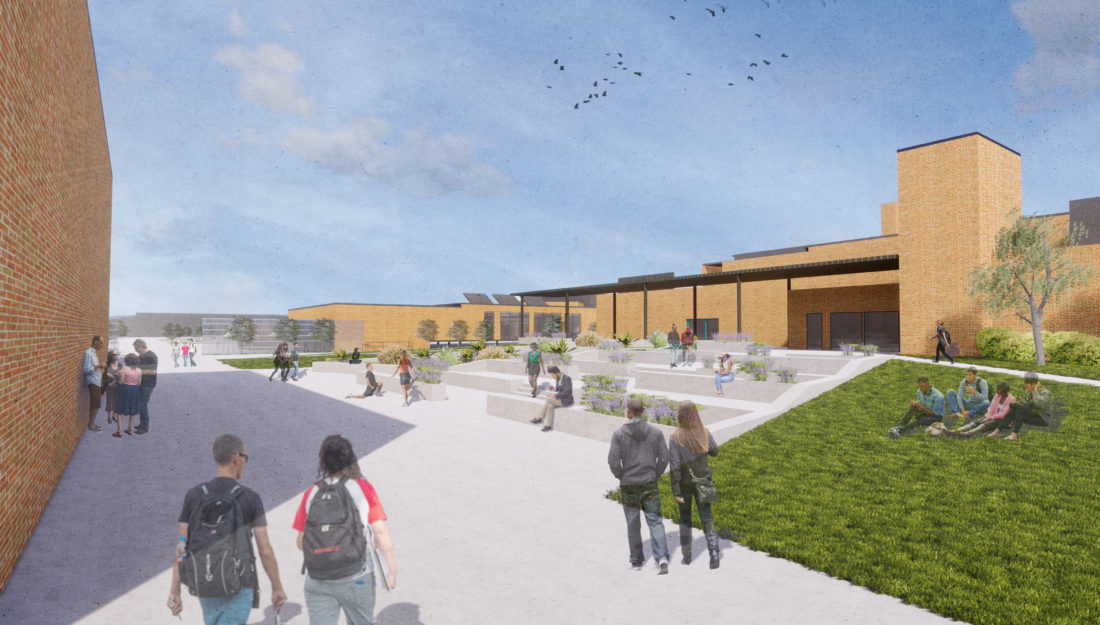 This rendering shows the view in the West Courtyard at Lawrence High School, as shown in an updated construction plan presented to the Lawrence school board on Monday, Jan. 28, 2019.

• A central office for student support and success. Lang said many resources for students are currently scattered in “nooks and crannies” around the building. The redesign will put assistant principals, social workers and counselors in one dedicated space.

• Connecting the annex. A new addition will link the annex to the rest of the school. It will also house four new classrooms.

Work on this project is expected to take 27 months — a bit less time than the 30 months that was previously estimated.

Scott Kimzey, of McCownGordon Construction, told the school board Monday that his firm has been working alongside Gould Evans to try to schedule and construct the project in a way that’s “as unobtrusive to the residents of the school as possible.”

Kimzey said the aim would be to move the spaces that are not traditional classrooms — such as science labs — just once, because those are costly moves. He said the firm would also work in larger contiguous blocks to reduce costs associated with phasing.

The moves will be “a lot less complicated for the students,” Kimzey said. “The traffic flows won’t be changing on a regular basis.”

As students leave for summer break this year, construction will begin.

“Right as the teachers and the students are walking out the door, we’ll be walking in to begin construction, starting where the current (career and technical education) resides, as well as renovations to the existing annex and link that will be connecting back to the existing facility,” Kimzey told the board.

The Lawrence High School portion of the district’s $87 million 2017 bond issue projects will have a maximum guaranteed price of $46.2 million, which the school board approved at its Monday meeting. The total for all projects with McCownGordon comes to $78.17 million.

Editor’s note: This article has been corrected from a previous version.