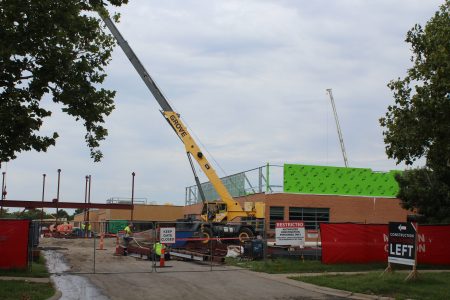 Construction crews work on the south side of Lawrence High School's campus on Tuesday, Aug. 20, 2019.

The construction company in charge of renovating Lawrence High School announced it is pushing back the completion dates for two phases of the project to make up for delays that occurred over the summer.

“We have to make sure we do a really good job setting realistic expectations for the amount of work that can be completed in a realistic time frame,” said Luke Deets, McCownGordon Construction’s project executive for the LHS renovation.

Phase two of the project includes the renovation of the school’s annex building and connecting it to the main building, which will add new classrooms to the building. Phase three includes a renovation to the school’s gym, according to Deet’s presentation. The changes to the timeline for the two phases will not change the overall expected completion date of August 2021.

In the future, Deets said the company will have “heightened communication” with the school district to make sure similar delays do not happen again.

Board member Shannon Kimball thanked Deets and the company, noting that she felt the company had been proactive in addressing the issue. Superintendent Anthony Lewis echoed Kimball, adding that he appreciated the company’s honesty.

“This is a team effort and we didn’t want to throw anyone under the bus,” Lewis said. “Things happen, but at the same time, in order to move on you’ve provided a great level of transparency for us.”

The completion of the first phase of the project was delayed because of the discovery of additional asbestos and issues from severe weather, including electrical complications associated with the May tornado.

The delays caused the school district to push back the start of both high schools six days, from Aug. 14 and 15 to Aug. 20 and 21. To make up for the delay, the high schools have added an extra five minutes to school days this year. School days begin at 8 a.m. instead of 8:05 a.m., with a 7 a.m. zero hour, which is an extra morning class period for certain programs. The high schools continue to dismiss at 3:10 p.m.

Even after delaying the start of the school year, LHS needed to use temporary classrooms because the delays pushed back the opening of 36 classrooms in the main building. Those 36 classrooms eventually opened several weeks later.

In other business, the school board received its first update from Lewis on the implementation of its five-year strategic plan. Lewis explained action steps that the district administration has begun in the first year of the plan, which includes improving curriculum and instruction, supports for students, school safety and climate and culture, among other areas.

He said some work is moving along well, such as the creation of a new survey that faculty and staff will be able to take to provide data to the district administration, which will be used to evaluate climate and culture in the schools. However, he said there have been some challenges, such as issues with electronic locks on school building doors, which faculty and staff may need more training to use correctly.

Lewis said he plans to report updates on the progress of the plan’s implementation quarterly and will likely have data to share in the next report.