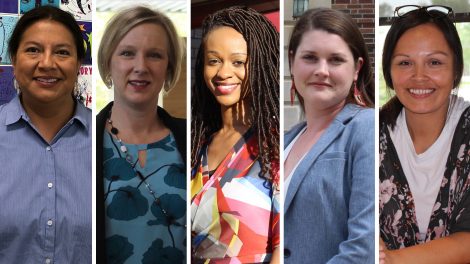 photo by: Contributed and Journal-World Photos

Although the issue of school safety and security has long been a priority for the Lawrence school district, a recent event has again made it an important topic of conversation for candidates vying for a seat on the school board.

But importance of a topic does not necessarily mean there will be disagreement, which the candidates have shown when the Journal-World recently asked their opinions on the issue.

Although there was not a threat to the students during an incident of a reported weapon at Liberty Memorial Central Middle School last month, that was not immediately clear. Neither was what the school was doing to address it, which led to some parents trying to take the matter into their own hands and breaking windows to provide students an exit from the building.

In light of the incident, Lawrence residents have shared differing opinions on whether either the parents or the school district responded correctly. However, the five candidates for the Lawrence school board election next month all agreed one thing needs to be addressed: improving the district’s communication during crisis situations.

It is one of several issues the candidates — Carole Cadue-Blackwood, Erica Hill, Shannon Kimball, Thea Perry and Paula Smith — seemed to agree on, including the district’s crisis protocol, use of school resource officers and resistance to installation of metal detectors.

While all of the candidates believe communication needs to improve, Smith said that doesn’t just mean the school district informs parents when a crisis occurs, but it also makes sure they are aware of how the school district would handle those situations year-round.

“We need to be thoughtful and intentional and make sure it happens year-round so our families feel safe,” she said.

Kimball, who is the only incumbent, said she believes the district did not handle the incident well. However, she noted the school district has already begun to take action on the issue.

“Some of those changes include rewriting some of our crisis plans, which guides our building staff in those situations, to include greater detail and clarity in the difference between a lockout, a lockdown, an active intruder situation and other emergency situations,” she said.

Through what she’s learned of the event, Kimball said there appeared to be confusion over what is an active threat and what isn’t. She said the school was meant to go into a “lockdown,” which locks the doors to classrooms and keeps students out of the hallways, but does not include an active threat. She said the school district needs to look into communications methods to address that confusion and make sure everyone in the building knows what is actually going on.

Additionally, there were concerns that a substitute teacher did not know what to do in that situation. Kimball said the school district is also looking into making sure future substitutes are trained in the school’s procedures in crisis situations.

“It could also be a weather event or a natural disaster,” she said. “All of those things, our substitutes needs to be well prepared to manage those situations.”

Cadue-Blackwood and Hill agreed that more training needs to be provided to school faculty, including the substitute teachers.

Perry, whose oldest daughter attends the school, said she’s grateful no one was physically hurt by an active shooter. However, she said the school’s handling of the event did cause emotional trauma to the students. She said she appreciated the school making sure counselors were available to serve students the next day.

If an active threat were present, the Lawrence school district would likely lean on its school resource officers to help address it. But the future of those officers being present during an event may be in doubt.

In July, the City of Lawrence and Lawrence Police Department asked the school district to consider contributing funds to pay for SROs. The discussion eventually resulted in some board members questioning whether they should be used in Lawrence schools at all.

Kimball said she is uncertain about the future of the SRO program. She said the district is currently reviewing its budget, which may include the effectiveness of the SRO program and its funding. But she said she did not want to take a position on whether they should be in schools until the review is completed.

“I think it’s important that I listen to the input from our staff, our students and our community,” she said.

However, Kimball said if the program continues, changes may be needed to make sure it reflects the best practices. But if the city requires the school district to pay for the program, Kimball said she would reconsider its existence.

“I’m not in favor of the district taking on financial responsibility for the program,” she said. “If I’m faced with a decision of whether I’m going to take resources away from teachers and programs for police officers in our schools, the answer is going to be no.”

Hill said she would support the use of SROs if they are sticking to their responsibilities, but she’s not sure yet of whether the school district should provide funding.

“That’s a conversation that needs to continue,” she said. “I can’t say without knowing the data and knowing what other programs will be at risk if we reallocate funds.”

While faculty and students have the right to feel safe in their schools, which an SRO can help provide, Perry said she has learned that those officers have become “de facto counselors” for students because of a lack of funding for hiring more trained counselors, which is not their responsibility.

“I think that’s a step in the wrong direction,” she said.

Echoing Perry, Cadue-Blackwood said she believes school funding that may go to SROs could be better used hiring more counselors in schools. Similarly, Smith said she would rather see that funding put toward a school district outreach effort to help students and families understand behavioral health resources that are available.

“I would have a hard time supporting the funding of school resource officers in our schools,” Smith said.

Weapons in schools and metal detectors

In recent years, Lawrence schools have had to deal with several weapons- and threat-related incidents. While some current school board members said they would not support the installation of metal detectors in schools, Lawrence residents have repeatedly suggested they could be effective in addressing the presence of weapons in schools.

But the candidates again agreed that metal detectors would not only be costly, they may also send the wrong message to students about school buildings.

Additionally, she said metal detectors tend to be the last resort recommendation for these issues. She said there are plenty of other areas the school can improve — such as school climate and culture, bullying and mental health of students — to reduce weapons in schools.

Hill again said she would need to see data that supports their installation before she would support it.

“Again, I’m not going to stand firm without seeing the data,” she said. “That would be ill-advised on my part.”

Perry said the school district’s administration has informed her that the students would consider metal detectors to be impractical, noting they may be standing outside for 20 minutes each morning going through the detectors.

She said she also worries they would cause students more harm than good because they would be a daily reminder of potential harm, which could cause stress.

Smith said the school district currently requires visitors to be let into the building through its administrative office before they access the whole building. She said she didn’t think metal detectors could add much more safety than that. She also said they would be impractical for students to get into the building.

“It would just take twice as long for students to get through,” Smith said. “They would have to arrive to school early to get through that process.”

While the physical building is an important aspect of school safety, some of the candidates said there are other issues that the district needs to consider as well.

Hill said there are more safety and security issues than metal detectors and SROs. She said to provide safety in schools, the school district needs to have broader “upstream” conversations to prevent issues that lead to the installation of metal detectors, such as addressing bullying among students.

“Bullying is a huge issue,” she said, noting that with social media, bullying among students happens outside of school as well. “If a kid doesn’t feel safe, they aren’t going to achieve academically, socially or emotionally.”

Cadue-Blackwood said another way to improve safety is helping address mental health among students. She said she would like to explore more partnerships with the Lawrence-Douglas County Health Department, specifically working to address suicide among students.