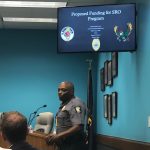 School district leaders have concerns about helping the city pay for a program that puts police officers in schools, and some are questioning whether the program is worthwhile at all.

That was the takeaway from Wednesday’s meeting between City of Lawrence leaders and the Lawrence school board about whether the district should contribute some funding for the Lawrence Police Department’s school resource officer program. The program has been paid for solely by grants and city funds since 2001. At Wednesday’s meeting, however, Police Chief Gregory Burns Jr. proposed expanding the program and also suggested that the school district pay half of the salary and benefits for the officers — currently about $47,000 per officer per year.

The school resource officer program currently has four officers. Two officers are stationed at each high school in Lawrence, and each officer also spends some time at the district’s middle schools. Burns said he would like to add three more officers, one of whom would serve as the leader of the SRO team.

School board Vice President Kelly Jones said the request comes at a particularly difficult time for the board, which recently discussed its tight budget for the 2019-2020 school year.

And board member Shannon Kimball said splitting the funding 50-50 may not be fair to the school district because it does not have the same taxing authority as the city. Under state law, she noted, the school district can only raise its mill levy to pay for capital improvement projects such as new facilities.

“The budget questions we’ve been faced with are maybe more dire in some sense because we don’t have capacity in our mill levy to generate more funding,” she said. “We don’t have that control at all.”

But city leaders at the meeting stressed that they were under budget pressures too. The Journal-World has reported that the city is considering making cuts to former City Manager Tom Markus’ recommended 2020 budget to avoid raising property taxes.

“We’ve got to, at some point, share some costs,” Mayor Lisa Larsen told the school board. “Our budget is just as stretched as anyone else’s.”

Burns also said the split he was proposing wasn’t unusual. He said nearby communities such as Baldwin City, Olathe and Overland Park all have SRO programs that split their costs roughly 50-50 between the school district and the city.

The meeting became more heated when Jones and school board President Melissa Johnson began asking pointed questions about the value of the SRO program.

Burns told the board he’d heard good feedback about the program from school administrators, but Johnson specifically asked for research on how faculty and students feel about police officers being stationed in their schools. Superintendent Anthony Lewis said the school district does have research on the topic, but it was not available at the meeting. 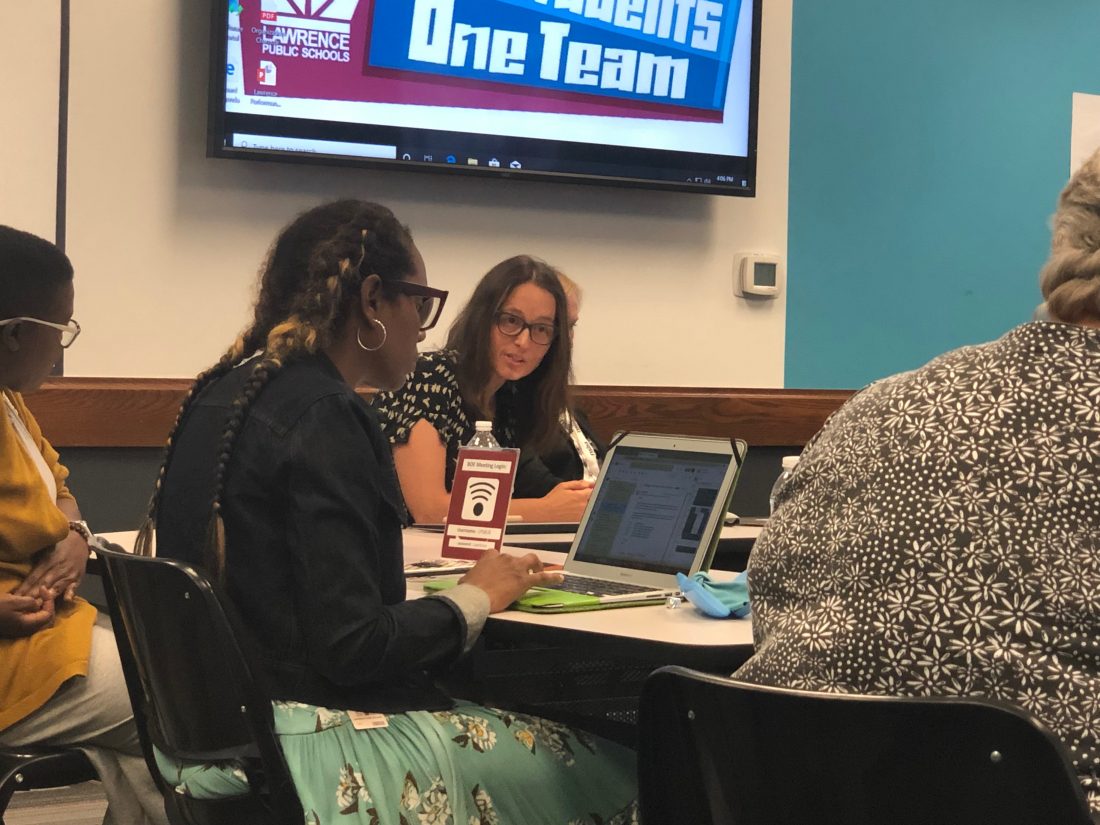 Lawrence school board vice president Kelly Jones, center, speaks to members of the Lawrence City Commission about issues she has with the school resource officer program. Jones asked pointed questions about the program and said she has concerns about how it affects students of marginalized groups.

Meanwhile, Jones asked for data on how the SRO program affects marginalized groups, such as female students and students of color. She said studies have suggested that SRO programs can increase minority students’ risk of being arrested, which could result in a path to future criminal activity.

Before the school board considers allocating funding for the program, Jones said, it should research those subjects through a systematic evaluation, much like what the board does when considering funding for other programs.

Burns defended the work his department does in schools. He said the main duty of school resource officers is a social one: representing the police department and helping students become more comfortable around police officers. He also said the police presence helps keep students safe and would be invaluable in a school shooting or other violent incident.

City Commissioner Matthew Herbert, who previously worked as a teacher at Lawrence High School, said the officers sometimes help out in classes, too. He said he used to invite school resource officers to address his civics classes, where they would explain how searches and seizures are conducted and what rights individuals have in those situations.

After hearing Johnson’s and Jones’ concerns, board member Jessica Beeson said she thought the joint meeting wasn’t the appropriate time to reconsider the program. Before continuing conversations with the city, she said, the board should put a working group together to research the program and consider its value to the school district. The other school board members agreed.

Although the meeting was tense at times, members of both the City Commission and school board said they were pleased with how the discussion went.

“I actually think opening this conversation and putting all this stuff on the table could potentially lead to a more positive relationship,” Beeson said.