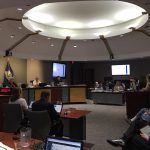 The Lawrence City Commission listens to public comment on proposed budget cuts as part of its work session July 9, 2019.

City leaders reached a general consensus Tuesday that the city should make cuts to several programs in order to keep the property tax rate flat and eliminate proposed entrance fees for recreation centers, but expressed interest in continuing to fund a scholarship program at the Lawrence Arts Center.

Markus’ recommended operating budget totals about $236 million and calls for a 0.5-mill property tax hike as well as utility rate increases and cuts to recreation services. Following the presentation of the recommended budget last month, the commission expressed concerns regarding the proposed changes to taxes, utility rates and the Parks and Recreation Department, including staffing cuts that would close the Community Building for drop-in use, and came up with a list of eight budget elements to scrutinize. The commission appointed Mayor Lisa Larsen and Commissioner Stuart Boley to work with city staff and then bring recommendations back to the full commission for consideration.

Some residents and the city’s Parks and Recreation Advisory Board have expressed concerns about the effect of entrance fees on low-income residents, especially given the health disparities between higher-income and lower-income areas of Lawrence. The budget cuts proposed by Larsen and Boley would eliminate the entrance fees and keep the Community Building open for drop-in use, but Boley said the changes will only address 2020 and that the city will need another plan going forward for the recreation fund.

“This was a tough one for us to come up with, and it’s unsustainable,” Boley said. “This is a one-year proposal to provide some time for the Parks and Recreation board and staff to work within the next year to come up with a sustainable path forward for this fund.”

During public comment Tuesday night, several residents spoke in opposition to the budget cuts, including one that would affect a $30,000 appropriation for the Lawrence Arts Center scholarship program. Residents said that the scholarship program is necessary to ensure that low-income people have access to the arts. Arts Center CEO Margaret Weisbrod Morris said the cuts would constitute a 25% reduction in the center’s financial aid program, affecting almost one out of every four students. Morris said the private-public partnership between the city and the center was formed because it was understood that neither entity could do it alone.

“Public funding, like the support we have received from you, is citizen driven, serves the public interest and ensures that everyone benefits,” Morris said. “Our private investment goes to major projects, fosters experimentation and supports innovation.”

But Larsen said that she and Boley looked at the financial statements of several organizations, including the Arts Center, and found that the center has reserves and solid funding to absorb the cost if it wants to continue to fund the scholarships at the same level. She also noted that the city provides the building for the Arts Center, which includes covering the cost of utilities and major repairs, amounting to $330,000 in funding in 2018.

“I just want to make sure everybody understands that we do provide other funding, and by us doing this it frees up their money for arts programs as a whole,” Larsen said.

The commission generally agreed on the changes that would keep the Community Building open and eliminate the need for rec center entry fees. However, two of the five commissioners, Leslie Soden and Matthew Herbert, said they did not want to remove the funding for the Arts Center scholarships. After some discussion, commissioners ultimately agreed that they would like to scale back a proposed increase in commissioner pay by $30,000 to preserve the scholarship funding.

Also on the subject of commissioner pay, which has not changed in 20 years, some commissioners expressed interest in more slowly stepping up the increase or approving an increase but not having the change take effect until 2021. Herbert noted delaying the raises would free up more than $100,000.

As part of the meeting Tuesday, Larsen and Boley presented various funding recommendations to address each issue identified by the commission. The recommendations include the elimination or deferral of several city projects and funding cuts to transient guest tax special events grant program. In addition to the Lawrence Arts Center proposal, the recommendation calls for funding cuts to the Lawrence Chamber of Commerce, Explore Lawrence and the Bioscience and Technology Business Center. Representatives of other organizations that would be affected by the proposed changes, such as the Lawrence Community Shelter, also spoke at the meeting about the impact the cuts would have on their organizations and the community.

Changes to keep the property tax rate flat include reducing the funding increase for the Lawrence Community Shelter, matching the amount provided by Douglas County; reducing Lawrence Chamber of Commerce funding by $20,000; and reducing Bioscience and Technology Business Center funding by $20,000. Though commissioners generally agreed with the cuts proposed to reduce the property tax increase, Commissioner Jennifer Ananda said she had concerns about the impact on the shelter and commissioners ultimately said they wanted to keep the proposed increase in the budget for now as a precaution, so as to have flexibility to make changes as budget discussions continue.

The commission does not take action during its work sessions. Ultimately, a majority of the commission must approve any budget changes. The commission will authorize publication of the amended budget and the budget’s maximum expenditures as part of its meeting July 16 and a public hearing on the budget will occur Aug. 6.

In other business, the commission received a draft of the new comprehensive plan, Plan 2040, which lays out policies that will shape how the city grows for the next 20 years. Plan 2040 prioritizes development within the city’s boundaries and requires that several conditions be met if developers want to annex land to expand those boundaries. Plan 2040 will come back to the commission for further consideration at an upcoming meeting.