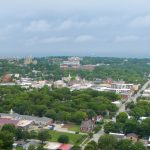 This file photo from July 2015 shows a westward look across Lawrence.

City leaders will soon discuss a new growth plan that would favor infill development over expanding the city’s boundaries.

As part of its work session Tuesday, the Lawrence City Commission will discuss the new comprehensive plan, Plan 2040, which lays out policies that will shape how the city grows for the next 20 years. Plan 2040 prioritizes development within the city’s boundaries and requires that several conditions be met if developers want to annex land to expand those boundaries.

The plan, though, states that “Our vision is to manage growth within the city by capitalizing on in-fill opportunities and directing growth to new areas where infrastructure is planned to be cost-effective and sustainable, while maintaining existing residents’ quality of life.” It notes that land within Lawrence boundaries is readily serviceable with the city’s existing water, sewer and stormwater infrastructure and serviceable by fire and medical personnel with the current stations.

Regarding annexation, the plan goes on to say that although growth generally is considered to be good because it accommodates an increasing population and expands the tax base, it also can have financial implications for the community. Specifically, it states that the cost of providing and maintaining infrastructure and services to a new area could place an additional financial burden on existing residents if it is not fully accounted for by the development.

In addition to the community benefit requirement, the growth policy requires annexations to be serviceable by current fire and medical infrastructure and readily serviceable with utilities with “minor system enhancements necessary for development.” Land that is not readily serviceable would only be annexed if the development proposal were found to be the only way to address an identified community need. The plan provides a map of the three growth tiers, with infill development being tier one.

The plan also covers environment and natural resources; neighborhoods and housing; transportation; economic development; and community resources, such as parks, the arts, and historic preservation. The full Plan 2040 is available on the city’s website, lawrenceks.org.

The plan will replace Horizon 2020 and covers land use in the city of Lawrence and the unincorporated areas of Douglas County. A steering committee has spent the last several years drafting the plan, and the Planning Commission reviewed the plan earlier this year and is recommending it for approval. The City Commission and County Commission will now consider the plan.