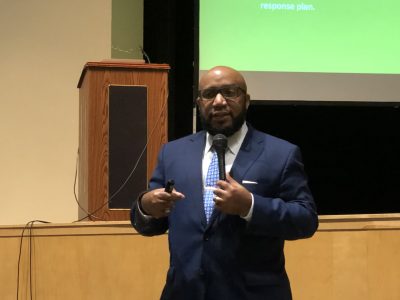 The Lawrence school district is working to make sure substitute teachers are trained on crisis procedures for the school buildings they are working in, its leaders say.

Ron May, director of school safety and security, said during the Lawrence school board meeting Monday that the district is also making sure substitute teachers are trained on the electronic door locks the school buildings use.

The move appears to be a direct action from the district to address issues that arose during a September incident at Liberty Memorial Central Middle School, where miscommunication of a possible weapon in the school led to parents breaking a window to help students out of the building.

Though the report of a weapon in the school was unfounded, parents criticized the school’s handling of the situation, saying it caused needless panic and trauma for the young students there.

During the school board’s work session Monday, May and Superintendent Anthony Lewis explained several other steps the district is taking to make school buildings safer, which was made a priority after multiple incidents of students taking weapons to school during the 2018-19 school year.

“No matter how well you prepare yourself … whenever you adrenaline is running, the words just don’t come out right a lot of times,” May said. “So having the script in front of you to start with is very important.”

While the moves are important, Lewis said the most effective way to prevent weapons entering school buildings is building relationships with students. Lewis briefly told a story, which he told the Journal-World in August, about one of the students who brought a weapon to school in February 2019. The student told him they did not feel safe at school and did not have anyone at the school they felt they could tell, Lewis said.

Lewis said the district must continue to build relationships with students to make sure they feel they can speak to faculty and staff when they do not feel safe. He said representatives for the U.S. Department of Homeland Security and the Secret Service who met with district staff about school safety also said that building relationships with students is the best method to create a safe environment.

To help improve those relationships with students, Lewis said the district will work with teachers during their professional development periods.

In other business the school board:

• Gave final approval to a new student dress code policy, which specifically outlines what students are and are not allowed to wear in school. The policy replaces the former vague policy, which read, in its entirety: “Student clothing that has the potential to cause a disturbance in the educational program of a school shall not be allowed.”

• Directed district administration staff to bring more data to the school board during its Dec. 9 meeting about how pushing back high school start times from 8:05 a.m. to 9 a.m. for the 2020-21 school year will affect students.