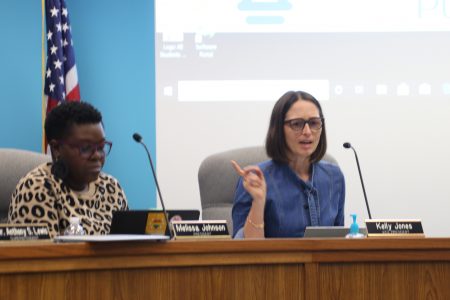 Students of the Lawrence school district may soon have a new set of criteria for how they can dress at school.

The Lawrence school board on Monday gave initial approval to a proposed dress code policy change that would more specifically outline what students are and are not allowed to wear while they are at school.

School board members and parents who spoke in support of the policy hope the change will provide more equity in how dress codes are enforced in schools, specifically making sure female students and students from low-income backgrounds, among others who are often targeted by such policies, are treated fairly. The written policy specifically notes that the dress code is written to make sure it is “applied equitably to all students in the district.”

“We’re trying to create a dress code that — in its wording and in its application — is equitable,” said board member Shannon Kimball, who serves on the board policy committee that created the policy.

The board voted to approve the policy with a 5-0 vote. Board members Jessica Beeson and Rick Ingram did not vote because they were absent from the meeting. The board will consider giving final approval to the proposed policy, including any proposed edits, during its next meeting on Nov. 25.

If approved, the new policy would replace the current, vague policy, which reads, in its entirety: “Student clothing that has the potential to cause a disturbance in the educational program of a school shall not be allowed.”

Kimball told the board that the committee has been working to update the dress code policy since early 2019 because of concerns that the current policy is too broad. Kimball said the committee had received several complaints from students and parents about it.

The proposed policy says students must wear some sort of top, bottom and shoes. Additionally, they may wear hats, including religious headwear; hooded sweatshirts; fitted pants, including leggings, yoga pants, and “skinny jeans”; ripped jeans, as long as underwear is not exposed; and tank tops, including spaghetti straps, halter tops, and strapless tops.

• Clothing with violent language or images on it.

• Clothing with hate speech, threats, profanity, or pornography on it.

• Clothing with language or images that create a hostile or intimidating environment based on any protected class.

• Visible underwear. Visible waistbands or straps on undergarments worn under clothing are not a violation.

• Bathing suits, except where required for participation in a course or school activity.

• Helmets, hats, or headwear that obscures the face, except when worn as a religious observance or for medical purposes.

• Clothing or accessories that may endanger the student or others, such as spikes.

• Clothing that covers the student’s face to the extent that the student is not identifiable (except clothing or headwear worn for religious or medical purposes).

Answering a question from other board members, Kelly Jones, who also served on the committee, said the policy includes both what is and is not allowed to make it easier to be applied by school building staff and faculty.

“The way the dress code policy has been administered has been entirely subjective and conscious or unconscious bias comes into play quite a bit,” Jones said. “The more concrete we can be with the policy, the more likely we are to change behavior from the grown up, to be frank.”

The proposed policy says the superintendent is responsible for ensuring all staff and faculty are trained to apply the policy equitably. It also encourages staff and faculty to make reasonable efforts not to discipline students in front of their peers for violating the dress code.

Additionally, the policy prohibits disciplining or removing students from class for violating the policy unless “the attire creates a substantial disruption to the educational environment, poses a hazard to the health or safety of the student or others, or factors into a student behavior rule violation such as malicious harassment or the prohibition on harassment, intimidation, and bullying.”