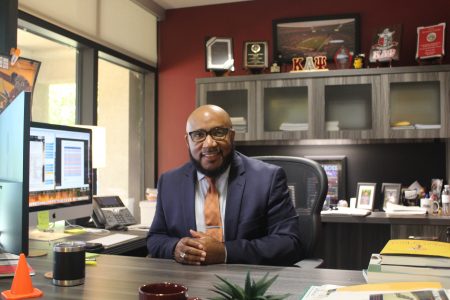 Lawrence Superintendent Anthony Lewis sits at his desk on Tuesday, Aug. 6, 2019. Lewis told the Journal-World he plans to begin taking steps outlined in the school district's new strategic plan during his second year in charge.

When Lawrence superintendent Anthony Lewis spoke to a student who brought a gun to Lawrence High School in February, he was shocked by what he heard.

The student said they feared for their own safety and brought the gun for self-defense, Lewis told the Journal-World on Tuesday. What’s more, he said, the teen didn’t feel like they had anyone in the school they could discuss the problem with.

“As large as Lawrence High is, that was mind-blowing to me,” Lewis said.

In response to that revelation, Lewis said both Lawrence high schools polled students on how they feel about discussing those issues with teachers or staff. The schools reached out to the students who said they didn’t have anyone to talk to about serious issues and paired them with teachers to help kick-start those supportive relationships.

Creating and strengthening bonds among students, teachers and staff like that is one of the action steps outlined in the school district’s new five-year strategic plan, which the Lawrence school board approved during its June 24 meeting.

Lewis, who is entering his second year as the district’s leader, said he’d spent most of the first year listening to stakeholders in the community — teachers, students, parents — and that he and other district leaders had used that knowledge to craft the strategic plan.

One of the most pressing concerns that came up in his first year was students bringing weapons to schools.

To address the immediate concern of student safety in those instances, Lewis said the administration is researching security measures that can be taken in the near future, such as using metal detectors in schools or requiring students to use clear backpacks. He said a report on that research will be presented for the school board in the coming months.

While the school board is unlikely to consider installing metal detectors, Lewis said one of the possible security measures being researched is a tablet and phone application that’s able to identify a weapon among a large group of people. Unlike a metal detector, the application allows people to walk through a doorway freely and notifies personnel with an alert when a weapon passes through.

“We’re looking at that as an avenue,” he said. “We are taking some measures to make sure our students are safe.”

Lewis left the Kansas City, Mo., school district to become Lawrence’s superintendent in July 2018. While his first year was mostly about taking the pulse of local schools, he plans to start making bigger changes and putting the district’s strategic plan into motion this year.

“You never want to come in and immediately change things,” he said. “You have to honor the work that is already taking place, so I was really intentional on coming in and listening and learning.”

One of the early steps — building authentic relationships between students and teachers or staff — is already in progress at the high schools, with students who say they’re isolated being paired with teachers. But the district is also planning to help teachers network with one another by relaunching its “professional learning communities.” These are groups of teachers in similar departments who meet regularly to discuss their teaching methods.

Also on the agenda: developing a cohesive curriculum that goes along with the federal Common Core standards. Lewis hopes a new curriculum will allow teachers to cover their subjects in greater depth.

All of these changes should promote a “laser-like focus” throughout the district, Lewis said. He said the “latest, greatest” educational concepts can often inspire a school or teacher to take new ideas into classrooms that can result in them going in a different direction than the rest of the school district. The new plan will ensure that the entire school district is focused on the same priorities, he said.

“That’s something I’m really excited about — the alignment,” he said. “It allows us to be focused over five years and not get distracted.”

Lewis emphasized that the changes weren’t happening just for the sake of change. He said he’d heard from plenty of people who were happy with the quality of Lawrence schools, but he stressed that the district shouldn’t rest on its laurels.