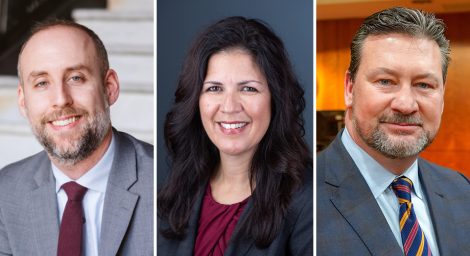 Three Democratic candidates for Douglas County district attorney spoke with the Journal-World recently to share their views on law enforcement misconduct and how they would handle such issues if elected.

Two newcomers, Cooper Overstreet, a Lawrence defense attorney, and Suzanne Valdez, a law professor at the University of Kansas, filed on April 15. Incumbent DA Charles Branson, who has not faced an opponent since he was first elected in 2004, filed on April 28. The next DA will most likely be decided in the Aug. 4 primary, as no Republicans filed.

All three candidates said they believe the majority of area law enforcement officers serve with dignity and respect for the community and that the officers work difficult jobs that often put them in dangerous situations.

When officer-involved shootings occur, outside law enforcement agencies conduct the investigations to avoid perceptions of bias. Some recent incidents in Douglas County have been investigated by the Johnson County Sheriff’s Office or the Kansas Bureau of Investigation, for instance. Other incidents or alleged incidents of misconduct and excessive use of force, however, are generally investigated internally.

Branson said that currently, if his office receives a complaint of law enforcement misconduct, staff collects all the information it can and then makes a report to the agency’s internal affairs division. Depending on the allegations, he said, staff will require follow-up from that agency. However, Branson said it was his preference for an outside agency to conduct investigations of any type of major use of force incidents as well.

Asked how they would handle complaints of misconduct, Overstreet and Valdez both brought up the concept of a citizen review board responsible for reviewing complaints about law enforcement. As the Journal-World recently reported, the City of Lawrence has a Community Police Review Board, but it has not reviewed a single complaint in the roughly two years since it was launched.

Overstreet said he thought such a board should “have teeth” and that it needs to have resources made available to investigate allegations of misconduct. He said he would lobby the city to give the board that power.

In addition, Overstreet said to make sure that investigations of officer-involved shootings aren’t biased, he may want to bring in agencies outside of law enforcement. He said it’s important that officers are able to work together cohesively, but that can also mean they favor the word of their fellow officers over that of the average citizen.

Valdez said she thought self-regulation was a problem, and the public should be able to present complaints in a way that they feel they will be received and handled appropriately. She said that “you want people to complain” so that the problems can be diagnosed and addressed.

Also, “Especially with law enforcement, you’ve got to have the marginalized community involved,” Valdez said. “… We’ve just got a whole different perspective on law enforcement and how we’ve been treated in the system, so we’ll look at it differently.”

She also said she thought sometimes prosecutors should charge cases against law enforcement, but instead they make excuses and justify what an officer has done; a citizen review board could take that power away from the prosecutor and serve as an independent body to review an incident. However, she noted that she would not hesitate to prosecute a “bad apple,” and she believes prosecutors and law enforcement should always be held to a higher standard of conduct.

Branson said that over the years his office has “unfortunately” had opportunities to charge law enforcement officers for both on- and off-duty incidents and that it’s his office’s obligation to make sure that all proper procedures and policies are being followed so that people are being prosecuted appropriately.

“Each one of those cases we take as seriously as if it was any other citizen in our community and try and make sure we get the right outcomes,” Branson said.

Branson said his office “absolutely” would not accept an affidavit, search warrant or request for arrest from officers who have known histories of bias or misconduct.

“To the best of my knowledge, our agencies usually terminate those employees if they have an issue,” Branson noted.

Overstreet said deciding whether to charge someone and controlling what cases enter the criminal justice system was a very big job, and part of that is to make sure that officers with misconduct in their histories aren’t involved in the system.

Valdez said prosecutors don’t want “tainted” officers who have histories of misconduct involving evidence, and she would refuse to call one to testify.

All three candidates said they would also exercise prosecutorial discretion and might refuse to file charges if they believed law enforcement had targeted a segment of the population for any reason. Branson said he would definitely ask questions and refuse to file charges if he believed that had occurred. Valdez noted that “what’s important is to engage and to fix the problem.”

Overstreet said that if evidence in a prosecutor’s case is “based off of something that is a violation of (the defendant’s) constitutional rights, that’s not the community that we want to live in.”

The Journal-World asked each candidate for their thoughts and concerns about the overall culture of local law enforcement.

Overstreet said he thought prosecutors’ No. 1 role was to be arbiters of justice and fairness, and that it’s important for them to be as independent from law enforcement as possible in order to hold officers, and people in power, accountable.

“People are taking to the streets and they’re rioting, and they’re angry because this idea that law enforcement officers investigating themselves are finding no wrongdoing — that doesn’t sit well with a lot of folks,” Overstreet said. “… We need to treat officers just like everyone else and show that no one is above the law.”

Valdez said she thought there has been a breakdown in public trust for law enforcement, both nationally and, to a lesser extent, locally. She said she thought prevention, education, community outreach and accountability that extends to prosecutors can help change and shift the culture into a more positive and trusting environment.

She also said police are being asked to do too much when at times, others — such as experts in sexual assault and domestic violence — should be working collaboratively with police to handle certain types of situations. In addition, she said law enforcement needed to be culturally competent to understand that perhaps a witness isn’t cooperative because he or she doesn’t understand what’s being asked, or why some people might run from police.

Branson said he thought the five area law enforcement agencies have a desire to learn, but that there’s also a lot of work to be done.

“I think all of our law enforcement agencies are suffering from a fatigue of sorts that I think has been brought on by issues nationally, statewide and even locally with issues of systemic racism in our system,” he said. “I think everybody is going through a process of kind of questioning what they do and how they do it.”

The primary election is set for Aug. 4. For more information about the election and voting, visit douglascountyelections.com.

The Journal-World will cover each candidate who files to run for Douglas County district attorney and their views on key issues as the Aug. 4 primary election draws nearer.