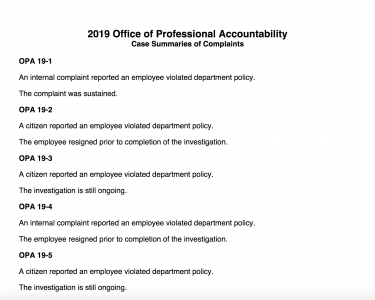 A Lawrence police department report about the complaints made against police in 2019 provides a two-sentence summary of each complaint.

Over the past two years, no member of the general public has laid eyes on details of the more than 25 complaints made against Lawrence police, and none of the cases has been reviewed by the city’s Community Police Review Board.

But as calls for police reform and accountability are heard across the country, city leaders are saying the public should know more.

Police department reports that are publicly available provide only two sentences about each complaint, and no details about the nature of the complaints or any disciplinary action that may have been taken. And because of the way it is structured, the board is only allowed to review certain types of complaints, and only if someone appeals the police department’s decisions — something that hasn’t actually happened in the board’s nearly two years of existence.

Mayor Jennifer Ananda said she would support the city providing more public information about police complaints and disciplinary records, but with considerations for what the city can legally release.

“I think it’s reasonable to release as much information as we are legally able to do, because it shows good faith with our community — it shows transparency,” Ananda said. “And it gives our community an opportunity to reflect on what our expectations are from our officers.”

Complaints against police are filed both internally and by members of the public, and are investigated by a division of the Lawrence Police Department, the Office of Professional Accountability, or the employee’s direct supervisor. Public reports provide only a two-sentence description about a complaint: a sentence about what was alleged to have occurred, and a sentence about the resolution of the complaint. And over the past two years, the reports have provided less information in those two sentences than in years past, as the Journal-World recently reported.

For instance, in the 2015 report, an internal complaint said that “an employee used excessive force to arrest a citizen” and a complaint from a member of the public said “an employee racially profiled them during a traffic stop.” Reports from 2018 and 2019 do not indicate the nature of the complaint. There were 16 complaints in 2018 and nine in 2019, and all simply state that an employee or officer was reported to have “violated department policy.” Past reports also provided a tally of how many times disciplinary action was taken, though there was no information about the complaint, the officer involved, or the type of discipline. Reports from the past two years do not include any information regarding disciplinary action.

Patrick Compton, a spokesman for the department, previously told the Journal-World that a more detailed report is provided to the city manager, which he said gives the department outside accountability.

Like Ananda, commissioners Lisa Larsen and Courtney Shipley also said they were open to providing more information about complaints.

“We’ve got to give complete information in order for anybody to look at it and make a judgment about it,” Larsen said. “The transparency aspect of that is that our police have indicated that they want to be transparent, and I believe they do, but we need to make sure we’re providing oversight so they are being transparent about their reporting mechanisms.”

Shipley also said the public should see more details about complaints made against police. Like her fellow commissioners, Shipley said that she would want to provide as much information as legally possible. However, Shipley said she thinks it is just as important for the city to consider Lawrence police department policies, which are what the Office of Professional Accountability uses to determine whether a complaint is sustained or unfounded.

The department’s policies are detailed in a 459-page document, and Shipley said the policies include many qualifiers that she thinks should be reexamined. She said that’s a huge conversation that should take place on the City Commission.

“We have a 400-page policy book that we can look at and see where mistakes can be made or where qualifications are made that should not be,” Shipley said.

The national debate about access to police records has intensified following the death of George Floyd last month in Minneapolis. Floyd, a black man, died after Minneapolis police officer Derek Chauvin knelt on his neck for close to nine minutes. Some information about individual officers in the Minneapolis police department is publicly available, and those records indicate Chauvin had various complaints filed against him over the years and had been disciplined multiple times, according to national media reports. On Tuesday, New York state legislators eliminated a law that shielded many police officers’ personnel and disciplinary records from being released to the public.

It wasn’t immediately clear what kinds of legal limitations might be at play in Lawrence. The Journal-World reached out to the city’s legal department, asking whether there is anything legally stopping the city — such as a state law, a city ordinance, or a provision in the city’s contract with the local police union — from making disciplinary records for Lawrence police public. City Attorney Toni Wheeler said she was working on providing that information to the Journal-World, but it was not yet available as of Friday afternoon.

Ananda said she supported making some information about police discipline public. Ananda, who has a background in law and social work, said that professionals such as attorneys and social workers provide some level of public records to ensure they are acting appropriately and ethically. She said law enforcement should be held to the same standard.

“I think that that is absolutely reasonable,” Ananda said. “We hold certain professions to higher standards. Law enforcement is one of those.”

Though Larsen and Shipley did not unequivocally say they would support making some information about police disciplinary records public, both said they would like to discuss the topic, again keeping in mind any applicable legal considerations.

Larsen said the city needs to be as transparent as legally possible, and that she thinks it would be helpful if an outside consulting firm did a top-down review of the city’s policies. She said she commends officers who are out there doing the best they can, but that the city needs to take a hard look at the department and how it serves the community.

“Because policing is a service; officers are here to serve the community members,” Larsen said. “And that’s where we need to make sure we are holding them to the line on that.”

Shipley said she thinks the public wants access to the disciplinary information. She said the commission needed to address that, and that she was looking forward to that discussion.

What the board reviews

The nearly two-year-old Community Police Review Board has yet to review any complaints, in large part because of how it was set up. Following hours of discussion by the City Commission in 2018, as well as some pushback from the local police union, the board was given a limited purview over complaints. That was despite calls from the local chapter of the NAACP for a more powerful and independent public board to review complaints against police.

Of the complaints filed since the board’s inception, only one was identified as a bias complaint, and the person who made the complaint did not appeal, according to Assistant City Manager Diane Stoddard, who is the board’s city staff liaison.

Sgt. Amy Rhoads, a spokeswoman for the department, said that the one bias complaint was filed in 2018, and that there were no bias complaints filed in 2019 and none so far in 2020. As far as overall complaints made so far this year, Rhoads said the Office of Professional Accountability has conducted three personnel investigations and it is likely that some complaints were handled or resolved by an officer’s supervisor.

Ananda, Larsen and Shipley all said the fact that the board has yet to review any complaints does create concerns.

Ananda said that filing complaints can be emotionally taxing because of the negative experience that gave rise to the complaint, and that from that perspective it doesn’t surprise her that people might not want to file an appeal. She said there could also be a perception that police would defend the behavior that the resident objected to. She said the city needed to make sure those who file complaints know they have a right to appeal.

Regarding whether the board should have power to review more complaints, and not just appeals of bias complaints, Ananda said she would want to hear input from the community.

Shipley also said she doesn’t think the city has done enough to make it clear to residents that they have a right to come forward, submit complaints through the board and appeal the determination. Shipley did not specifically say whether the board should have the authority to more broadly review complaints, but she thinks the board could address more issues, such as giving feedback about potential changes in policing and city policies.

“If nothing has come forward in more than a year, I feel like we know that’s not exactly right,” Shipley said.

At the time the commission created the board in 2018, Larsen said the board didn’t have “as much teeth” as she’d hoped, but that she wanted to at least get something in place and then work with the board to improve the ordinance, as the Journal-World reported.

Now, Larsen said the city needs to look at restructuring the board so that it can be “directly involved” with looking at complaints and have some independent review powers. She noted that even if an appeal had been filed, the board would only be able to review the police’s investigation. She said she’s heard from some board members that they are concerned with their ability to act independently and fulfill their mission.

“I think that we need to provide them with whatever tools are necessary so they can get a full picture that they can have trust in,” Larsen said. “Be it from a third party or whatever — I don’t know how that would look — but I do think they need to have more independence.”

Ananda, Larsen and Shipley all said that transparency regarding police complaints and discipline is only part of the conversation.

Shipley and Larsen both spoke to the importance of policies, and Larsen noted that the board was a multidimensional body that was also set up to consider policies and other community policing issues and provide recommendations to the commission.

The commission is also preparing for a much broader conversation about the role of police.

Ananda recently called for various changes to local policing practices, as the Journal-World reported. Those changes include the reallocation of funds from the police department’s budget to address social issues that she says police have been inappropriately tasked with handling, such as homelessness, mental health issues, drug abuse and other nonperson crimes. She said that instead of police intervention via Band-Aid methods, funding and action should focus on prevention of such societal issues and correctly defining the job of law enforcement.

“We as a community have to step up and have really complex conversations about really complex ideas so that we can have a real impact,” Ananda said. “Transparency of law enforcement discipline is a single sliver of this really huge conversation.”