Protesters had almost cleared from Massachusetts Street as of Thursday afternoon, July 2, 2020. Those who remained worked to organize supplies to be donated.

A protest that had occupied Massachusetts Street since Saturday evening had almost entirely cleared out by Thursday afternoon.

Around 3:30 p.m. Thursday, roughly 20 people remained in the northern portion of the strip of Massachusetts Street that the City of Lawrence had authorized the protest to occupy, gathering and organizing supplies to be donated.

City crews let the water out of barricades along South Park Street; then street sweeping trucks worked their way north, toward the barricades along North Park Street. Porter Arneill, spokesman for the city, said the city was also going to help the group distribute supplies, such as remaining cases of bottled water, to recipients. 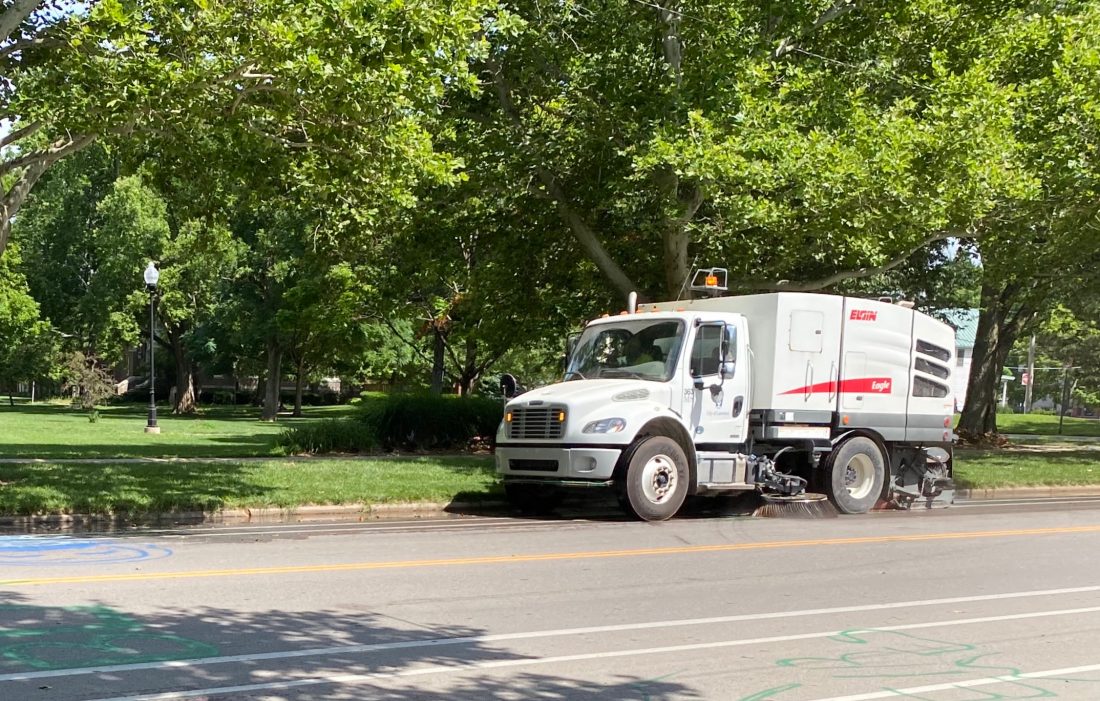 A street sweeping truck works its way north on Massachusetts Street following a roughly five-day-long protest that had occupied the stretch of the road from North Park to South Park streets, July 2, 2020.

The protest came together after a graphic banner depicting a lynching and an anonymous letter denouncing the Black Lives Matter movement were found near South Park on Saturday morning, the Journal-World has reported.

On Sunday morning, a protester told the Journal-World that the group was a coalition of groups led by Black women. He said the group was demanding the Lawrence Police Department immediately open an investigation into who placed the banner and accompanying letter. The group also wants to see defunding of the Lawrence Police Department with the reallocation of funding for social programs.

Another one of the main goals of the protest had been to secure the bail bond and release of Rontarus Washington Jr., a 24-year-old defendant in a long-running Lawrence murder case who had spent more than five years in the Douglas County Jail. After Washington waived his right to a speedy trial to give his attorneys more time to gather evidence, his case went to trial in September 2019; the jury hung, and his retrial is now pending.

That goal was accomplished when the group crowdfunded $50,000 to cover Washington’s $500,000 surety bond, and he was released Wednesday evening. He is being monitored by an electronic GPS ankle bracelet.

Organizers who have been speaking on behalf of the group were no longer at the scene Thursday. However, one of them, Natasha Neal, spoke briefly with the Journal-World on Wednesday about the next steps. She said they’d been passing around signup sheets for people to stay in contact and to continue work in areas such as education and the judicial system.

“Now that we know what we’re capable of doing together, we’re going to continue on,” Neal said. “Everyone will fight where their passion is and work together to make the community better.”

At times over the past several days, hundreds of people had gathered on Massachusetts Street in support of the group’s goals and the Black Lives Matter movement.

Monday afternoon brought some conflict when two drivers separately drove their vehicles into the crowd of protesters. Also on Monday, law enforcement had attempted to clear protesters out of the streets, making six arrests and issuing three citations in the process. However, shortly thereafter, Interim LPD Chief Anthony Brixius agreed to allow the group to occupy the portion of Massachusetts Street that lines South Park, where people would not impede traffic to area businesses.

In a news release late Thursday afternoon, the Douglas County district attorney’s office said it would not file charges based on the citations referred to the District Court, “or against anyone engaged in peaceful, nonviolent protests.” The release also said that law enforcement investigations of the banner hung in South Park and of the vehicles that drove through the crowds continued.

The city had installed more substantial barricades and agreed to allow the protesters to occupy the street through “at least” Wednesday. 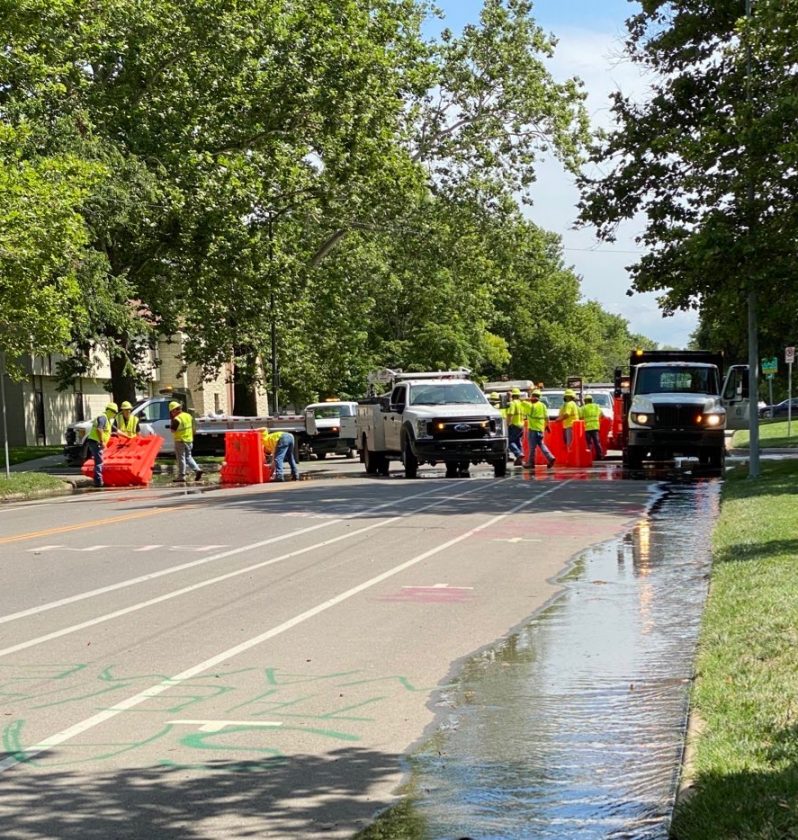 Water runs down Massachusetts Street from barricades that had blocked the roadway at South Park Street on July 2, 2020.

• June 30, 2020: Section of Massachusetts Street occupied by protesters will stay closed ‘at least’ through Wednesday; mayor voices support for protesters