After earlier attempt to clear the street, police allowing protesters to stay 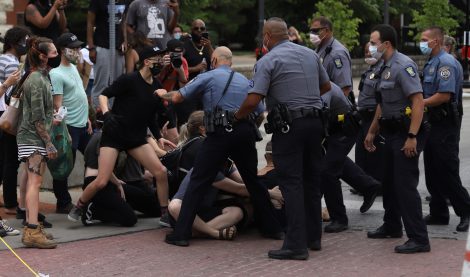 Protesters attempt to stay put after law enforcement officers had cleared most of the roadblocks they'd set up at 10th and Massachusetts streets on June 29, 2020.

Two vehicles tried to drive through crowds Monday afternoon and six people were arrested as police cleared a downtown street of protesters before then backing off and allowing them to reoccupy the street.

Monday marked the third day that protesters occupied a portion of Massachusetts Street just south of the Douglas County Courthouse. The protests began after a graphic banner and letter criticizing the Black Lives Matter movement — and seemingly depicting the lynching of George Floyd — were anonymously hung in South Park on Saturday.

The first vehicle incident occurred shortly before police started to clear protesters from the roadway, around 2 p.m. By late Monday afternoon, however, police agreed to allow protesters to continue to occupy the strip of Massachusetts Street that runs alongside South Park from North Park Street to South Park Street, or just south of 11th Street through just north of 13th Street.

By 5:30 p.m. Monday, more substantial barricades were in place to block off that section of the road. There are no other streets that vehicles can access for that stretch, and the protesters are not impeding any traffic to businesses. The areas on either side of that stretch of Massachusetts Street are accessible by Vermont and New Hampshire streets, a block west and a block east, respectively.

“The Chief of Police made the decision to place barricades between E. North Park and E. South Park Streets. This was done to provide a proper barrier between traffic and the assembly, providing a space in which citizens can peacefully gather, and the City can still function,” according to a statement from the department Monday evening. 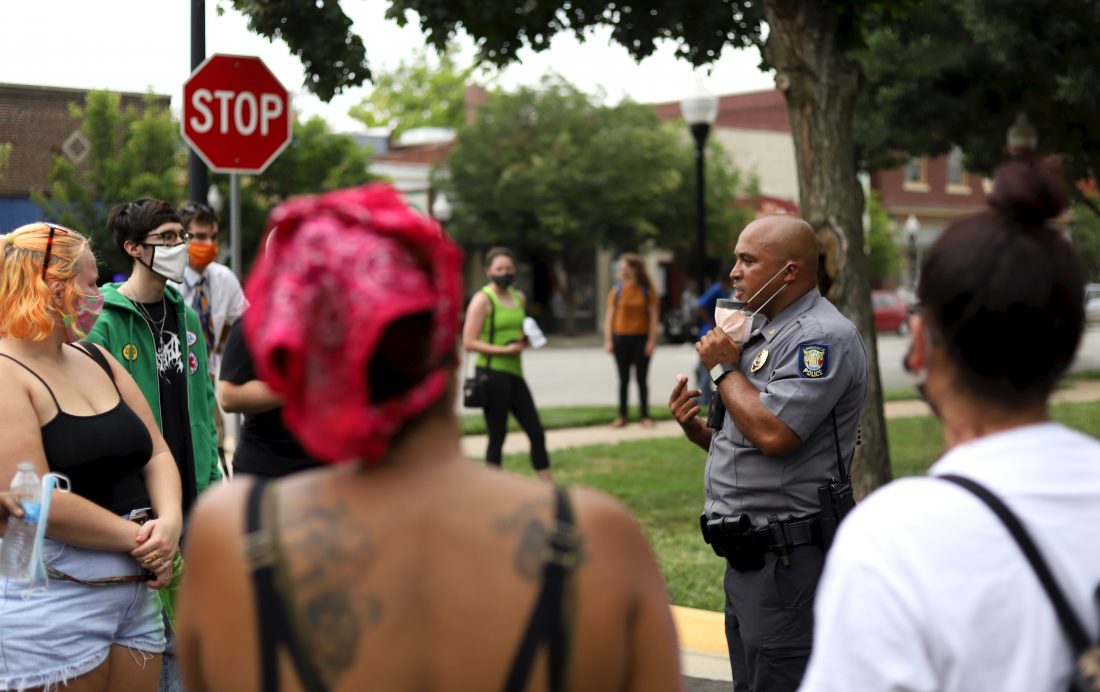 The protest began Saturday, after a graphic banner that many described as racist was found near 11th and Massachusetts streets. The protest has continued through Monday afternoon, and protesters have indicated they plan to stay through at least Wednesday. 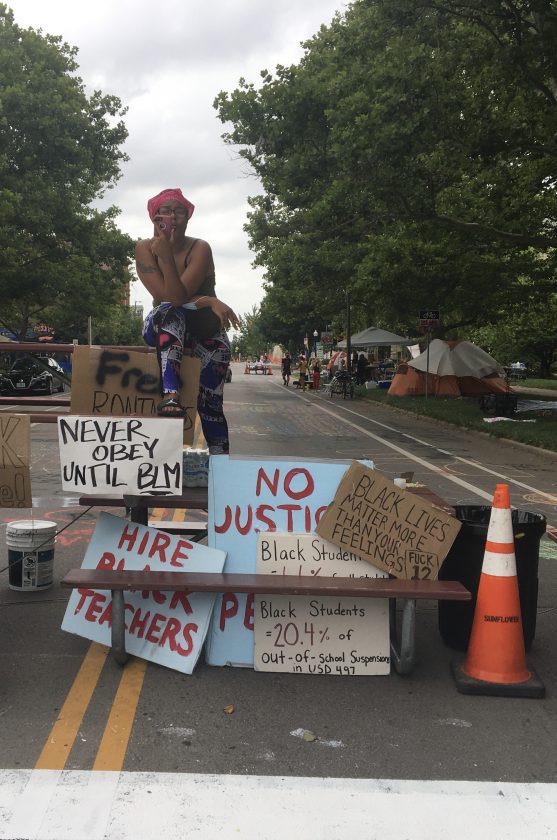 An organizer of the South Park protest talks into her phone Monday, June 29, 2020, shortly before police asked protesters to move out of the street that they had been occupying for three days.

Protesters are advocating for the Black Lives Matter movement, as well as pushing for the release of Rontarus Washington Jr., a Black man who has been in the Douglas County Jail for five years and is currently awaiting a retrial on a first-degree murder charge.

Shortly before 2 p.m., a silver SUV drove through barricades and into a group of protesters. No one appeared to be seriously injured. The vehicle was driven by a white person. The Journal-World was present for that incident.

A protester at the scene questioned why a vehicle had just driven through the crowd and she wasn’t hearing any sirens. She asked for white people who were present to call police and make a report.

In a statement to media Monday evening, Lawrence police said they were aware of the incident and were investigating. They also said there was a second incident, shortly before 4 p.m., but that they did not believe anyone had been injured in that incident, either. They did not indicate whether either driver had been arrested.

The protest has continued around the clock since Saturday evening. Tents line Massachusetts Street, and protesters have coordinated their own security, food supplies and bail fund database in case of arrest. But the Lawrence Police Department indicated shortly after 2 p.m. Monday that it was asking the protesters to move.

“We acknowledge and appreciate the right of our citizens to assemble peacefully. However, we are asking those individuals currently on Massachusetts Street to do so in a safer location out of the roadway,” Patrick Compton, a spokesman for LPD, said in a news release.

Compton said LPD and the Douglas County Sheriff’s Office were in the process of asking protesters to move from Massachusetts Street “to an alternate location so that the road can reopen for travel and commerce.” Compton noted that if they refused, they would be issued a notice to appear under K.S.A. 8-1503, and active refusal would result in arrest. 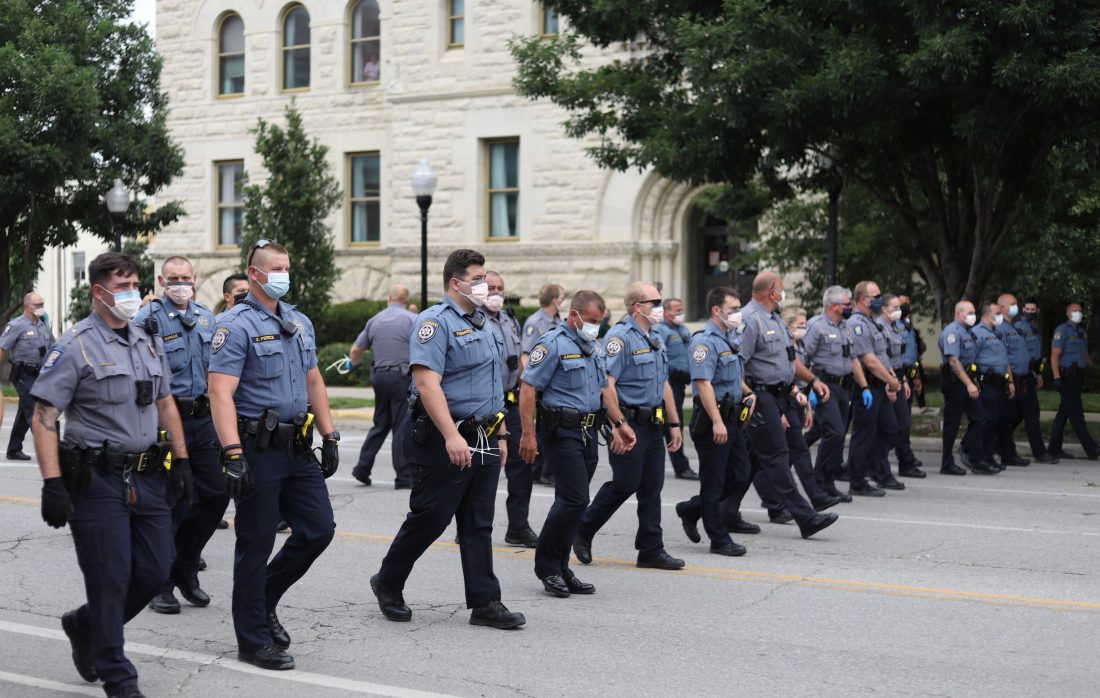 Law enforcement officers with the Lawrence Police Department and Douglas County Sheriff’s Office move down Massachusetts Street after clearing out protesters on June 29, 2020.

When Interim Lawrence Police Chief Anthony Brixius and a few other officers first came out to the street around the same time that LPD’s statement was released, the crowd chanted “Black lives matter” over Brixius. Using a PA system from a sheriff’s office vehicle, Brixius read the statement to the crowd.

Law enforcement officers from the Douglas County Sheriff’s Office and Lawrence Police Department began to line the intersection at 10th and Massachusetts streets shortly after Brixius delivered the statement. Officers began dismantling the makeshift barricades that protesters had set up to block off the road.

It appeared to the Journal-World that at least one person was escorted away from that intersection, seemingly under arrest. In a statement later Monday, police said that three individuals had been issued notices to appear and six had been arrested for allegedly violating a state law by refusing to comply with officers’ “lawful order or direction.”

Law enforcement slowly worked down Massachusetts Street to remove barricades, instructing protesters to move to the sidewalks along the way. City crews trailed behind, cleaning up and removing the barricades — made from dumpsters, trashcans, picnic tables, plastic fencing and similar materials. 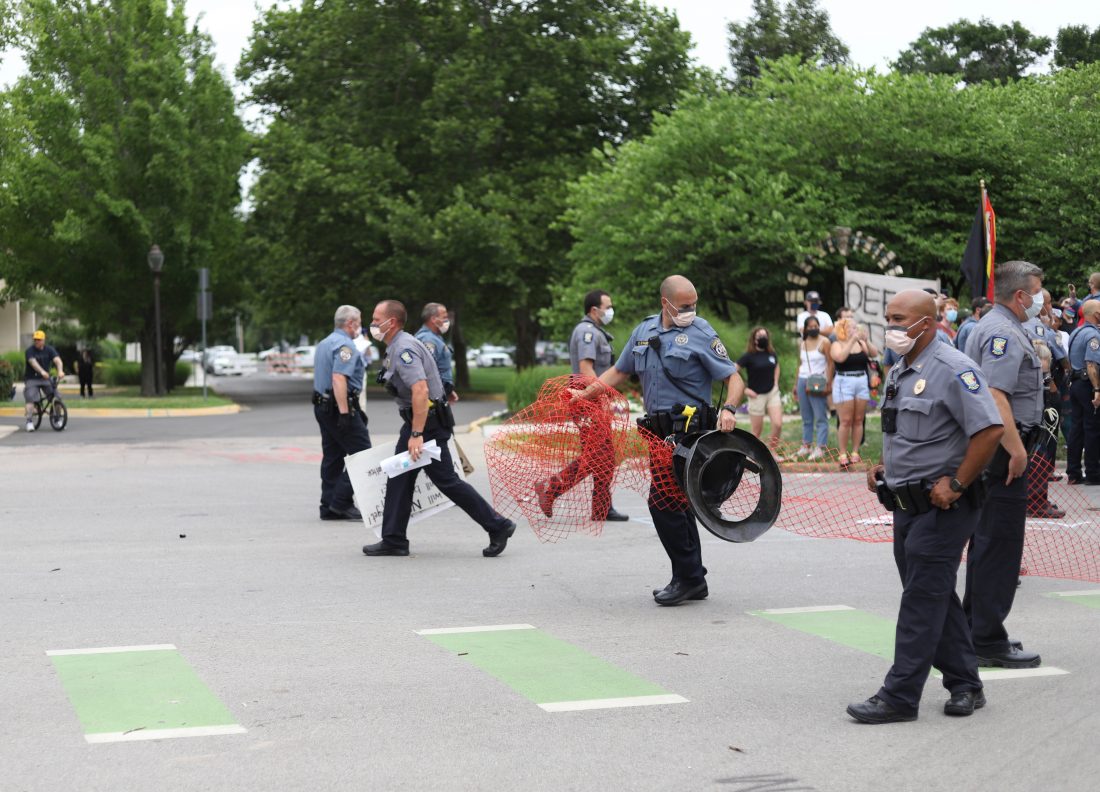 Law enforcement officers carry off signs and materials that protesters had used to create makeshift barricades on Massachusetts Street on June 29, 2020.

Eventually, the protesters — moved onto the sidewalks under command by law enforcement — and law enforcement lined Massachusetts Street from approximately North Park Street to the crosswalk in the middle of South Park.

Music blared from one collection of tents and picnic tables. Some protesters danced, often just feet away from the line of police officers blocking access to the street. Some protesters yelled at police officers, asking them to make statements about racism and denigrating their choice of profession as well as the use of their time that afternoon.

“I ain’t paying y’all to stand out here and harass people,” one of the protesters said to the officers. 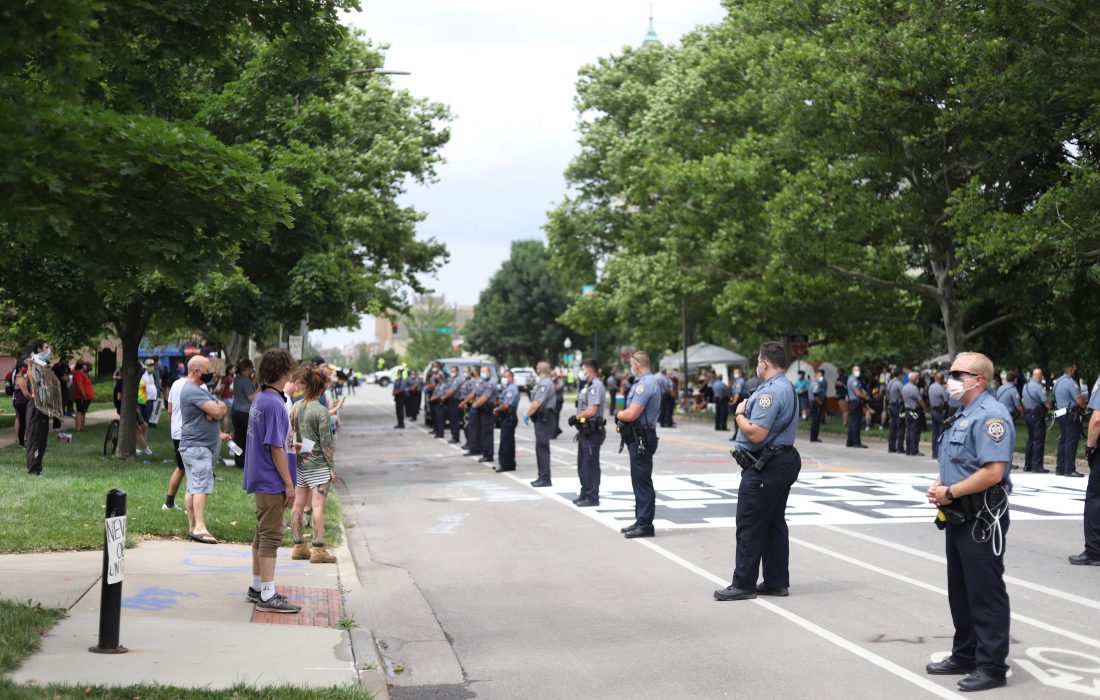 After more than half an hour of standing their ground, police told the crowd they were going to reopen the road to traffic, and the officers began walking back south toward the courthouse. Immediately, the protesters flooded Massachusetts Street again.

Brixius then spoke with a couple of leaders of the protest, and moments later, patrol vehicles were blocking off Massachusetts Street. Protesters brought tents into the stretch of road they were being allowed to occupy.

The city issued a statement after having been mum since Saturday. The statement said Lawrence police were investigating the incident of the banner, which the news release described as “offensive and hurtful guerrilla artwork.”

The city said it supports the right for all people “to engage in safe protest” and that the city had “respectfully honored the demonstration … for the past 36 hours,” but noted that it had a responsibility to keep city streets open and safe.

“The blocked street is also causing confusion for drivers attempting to access downtown to conduct both commercial and civic business,” the city’s news release said. 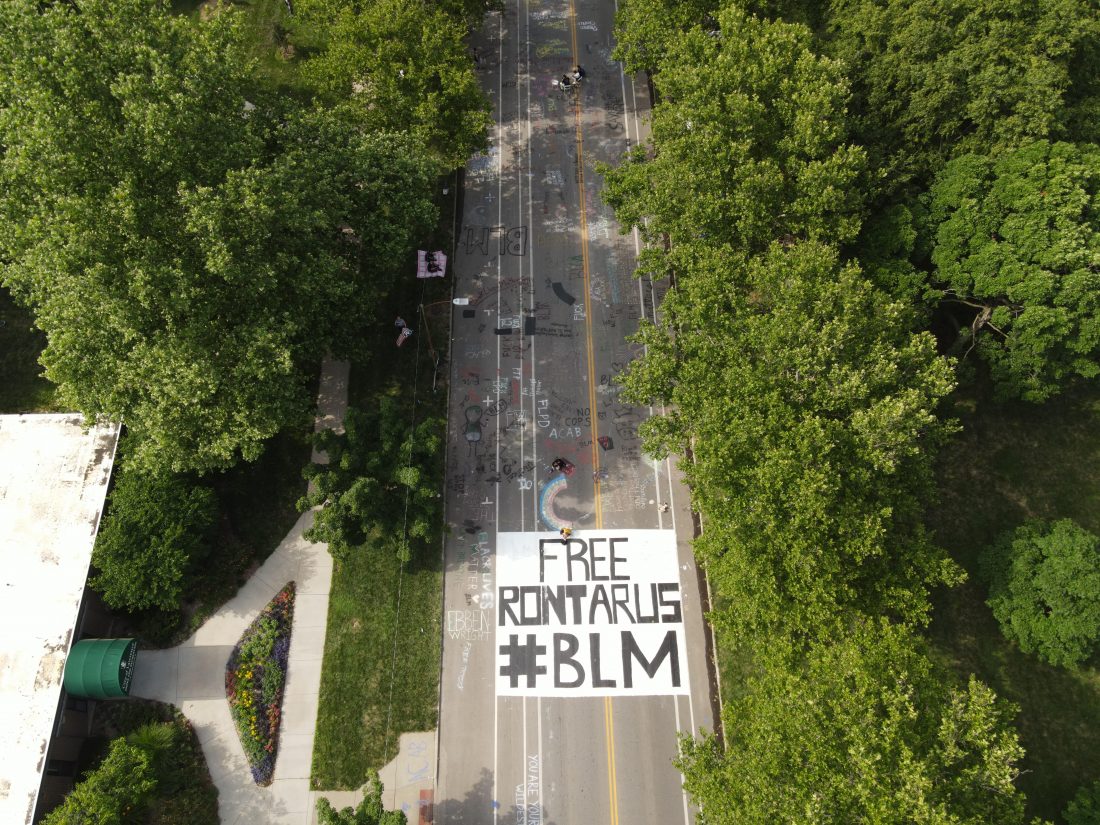 This photo taken from above Massachusetts Street on June 29, 2020, shows protesters’ messages painted and chalked onto the street, including the prominent message “Free Rontarus – #BLM”, referring to Rontarus Washington Jr. and the Black Lives Matter movement. As of the protest, Washington had been in the Douglas County Jail for more than five years as his case has been repeatedly delayed. 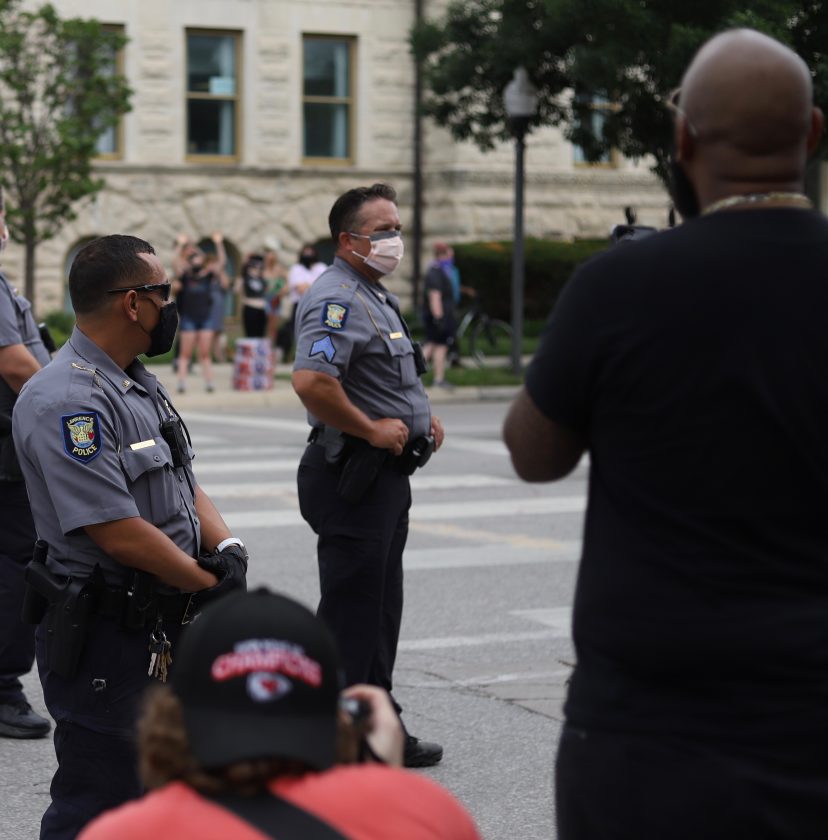 A protester asks a Lawrence Police Department supervisor why he has his hand on his weapon during a protest on Massachusetts Street on June 29, 2020. 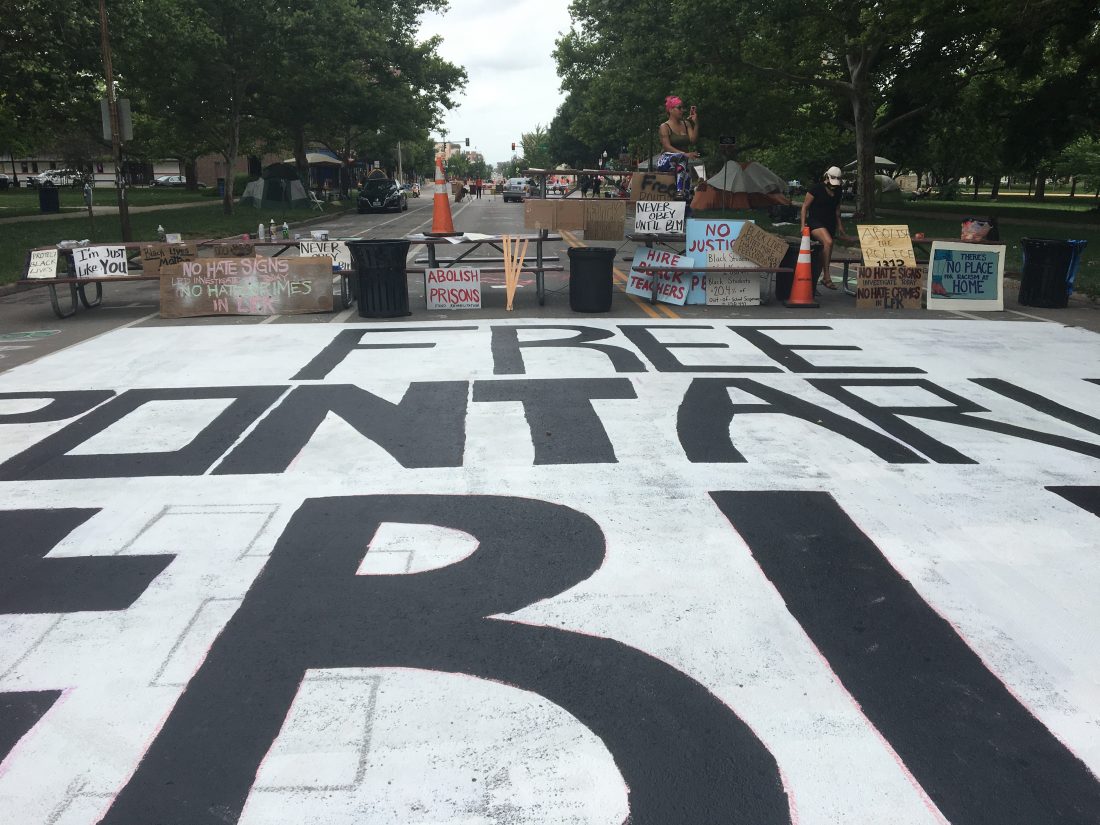 Protesters occupy a stretch of Massachusetts Street Monday, June 29, 2020. The view is looking north toward downtown Lawrence. The painting on the street says “#BLM” and “Free Rontarus,” a reference to a Black defendant in a Lawrence murder case. 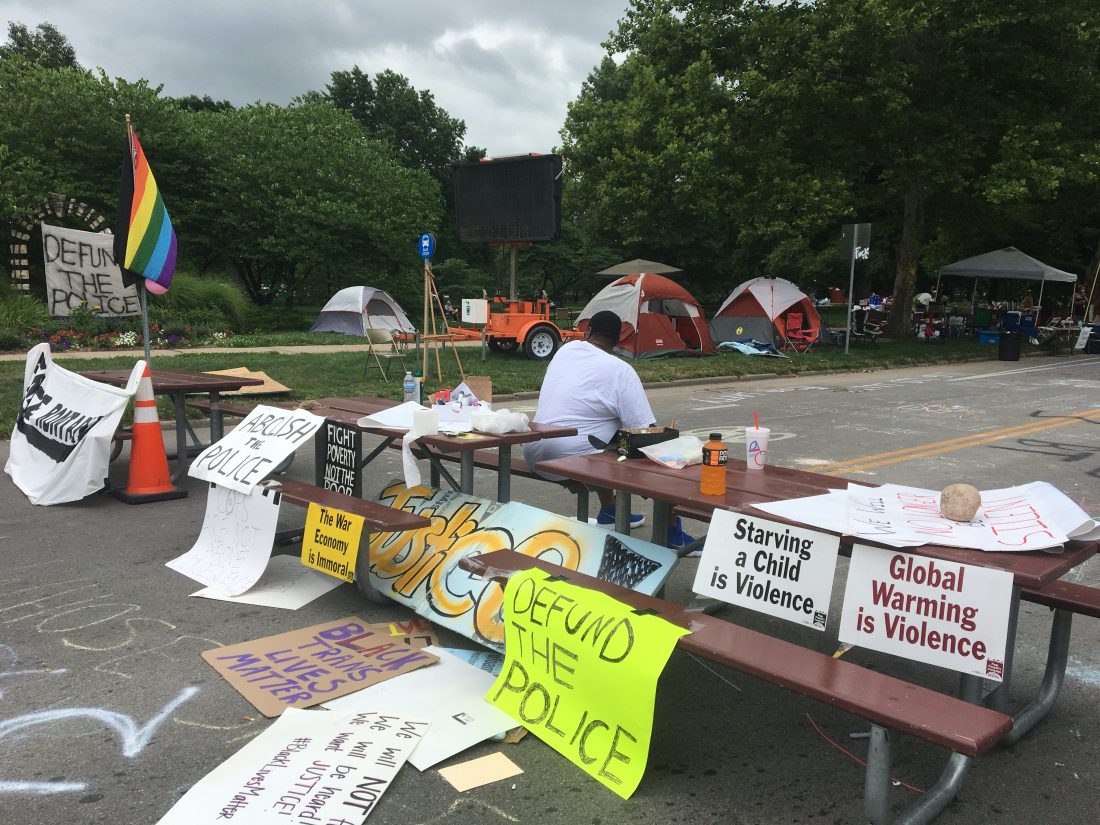 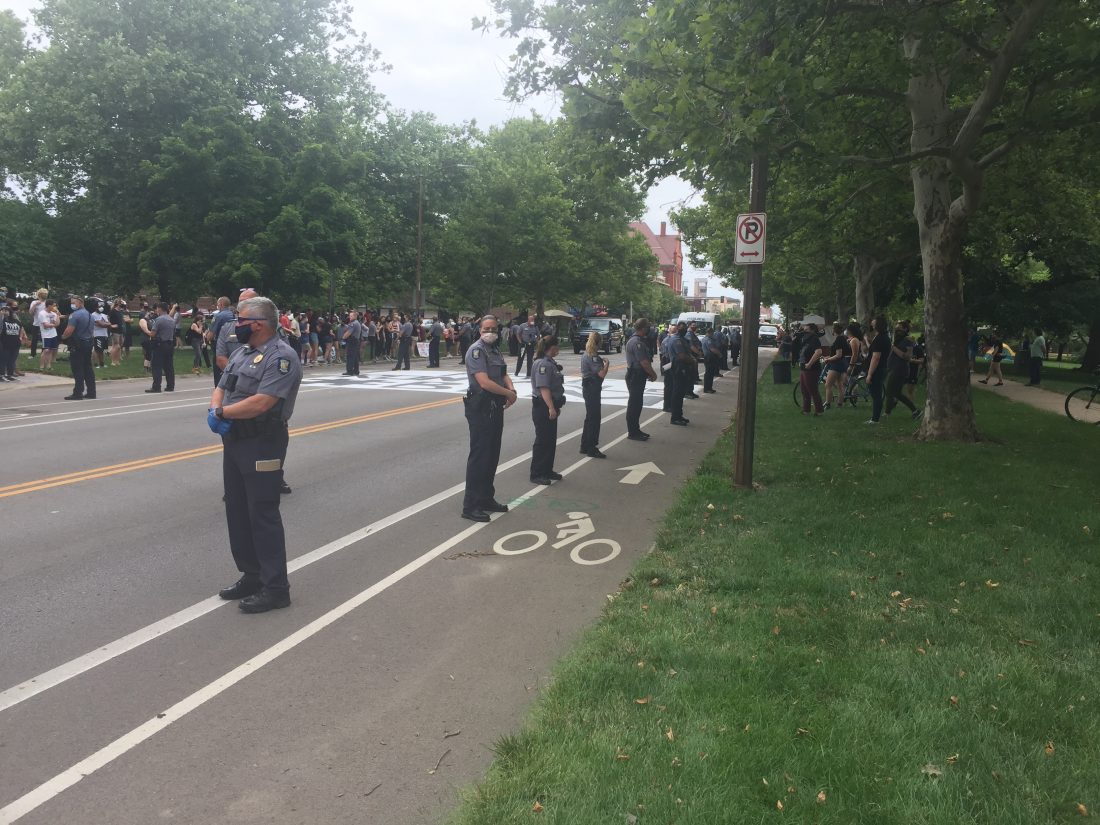 Law enforcement officers line Massachusetts Street near South Park Monday, June 29, 2020, after protesters were asked to move out of the street. 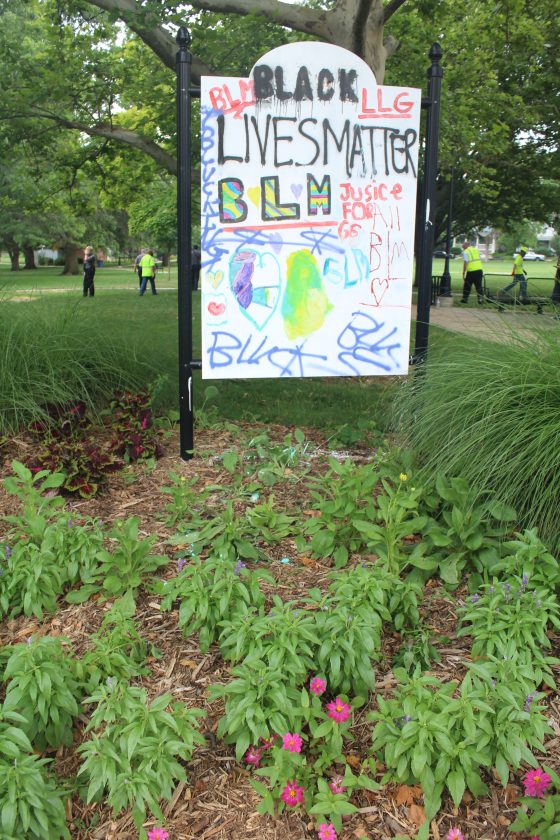 A public sign in South Park was heavily marked with Black Lives Matter and other social and racial justice comments. 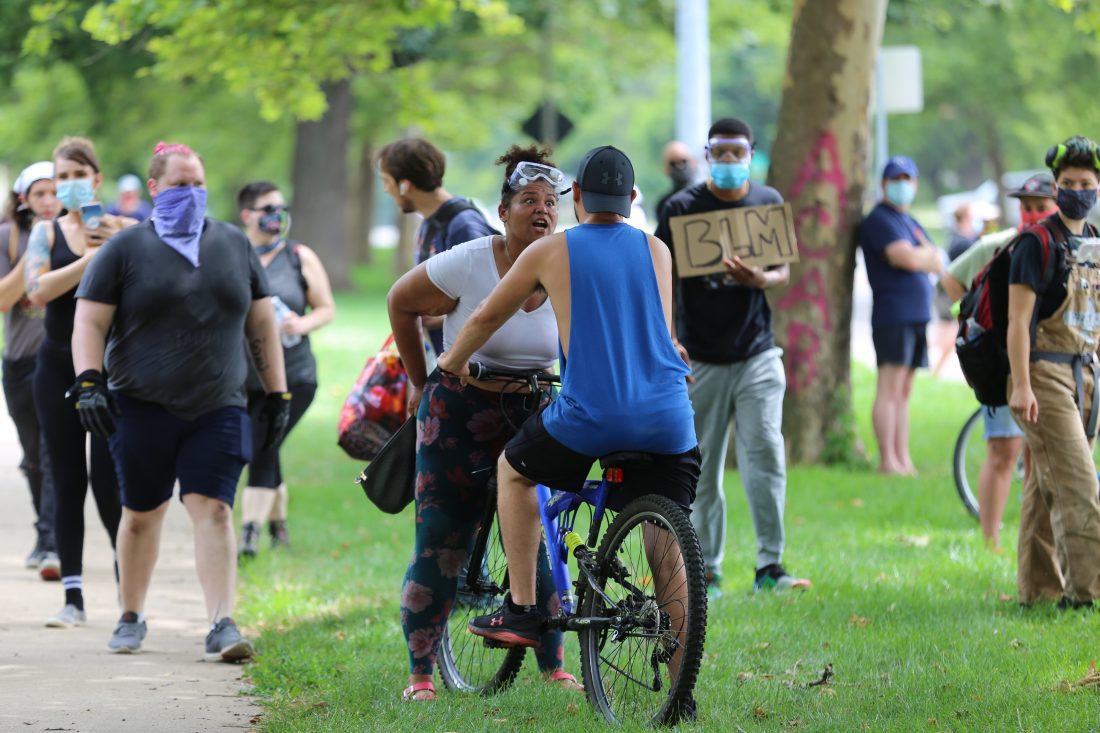 Words are exchanged between two people with different points of view as protesters gathered for a third day following a banner and letter critical of the Black Lives Matter movement being placed in South Park on Saturday. 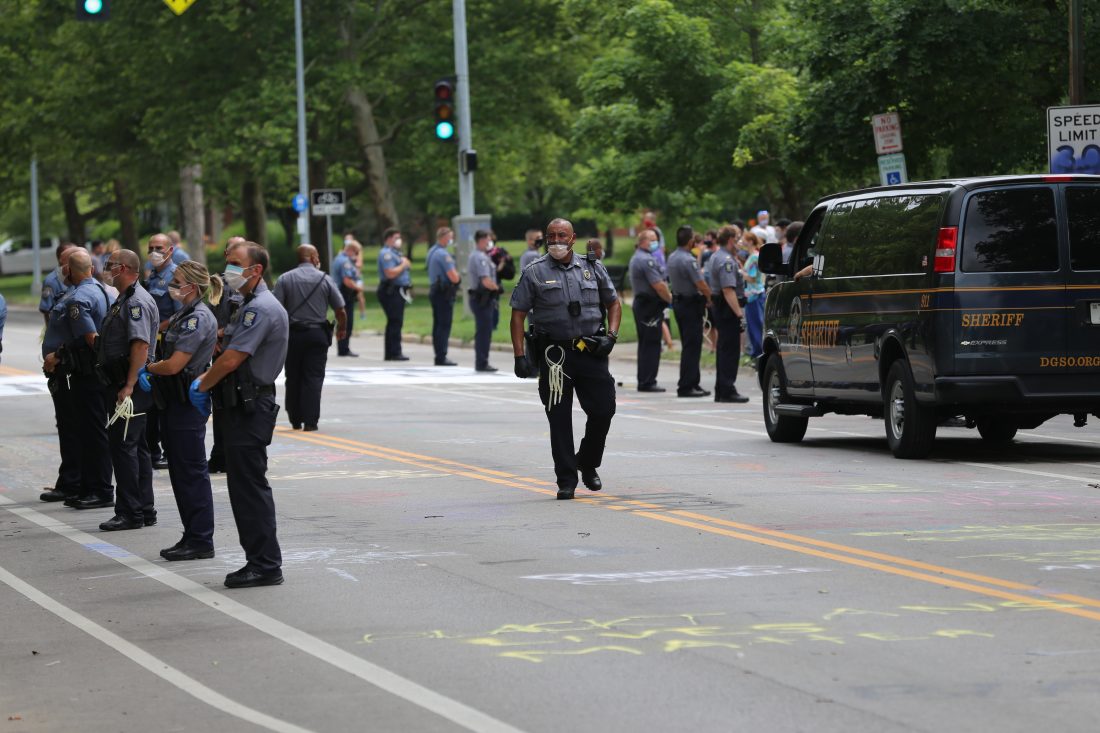 Members of the Lawrence Police Department and the Douglas County Sheriff’s Office were out in large numbers after the city issued a statement at about 2 p.m. ordering all people to vacate the public street, or else face a municipal ticket or arrest if they resisted.

Protesters gathered along the south side of Massachusetts Street on Monday afternoon, June 29, 2020, after police officers and sheriff’s deputies lined the street to keep people out of the roadway. 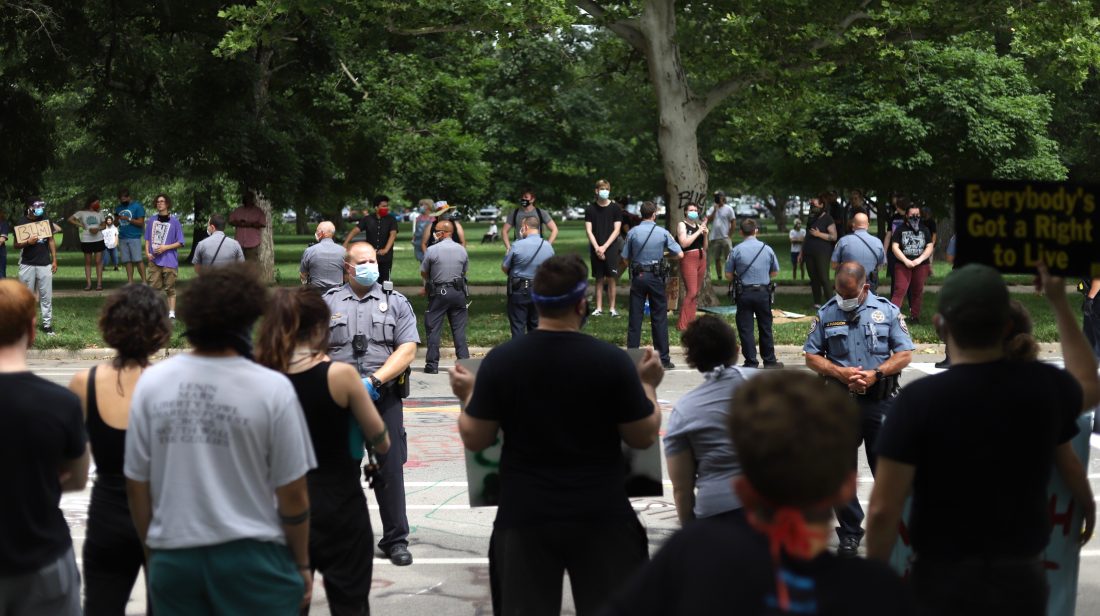 Lawrence police officers, in gray, and Douglas County sheriff’s deputies, in blue, line Massachusetts Street after clearing protesters out of the road on June 29, 2020. 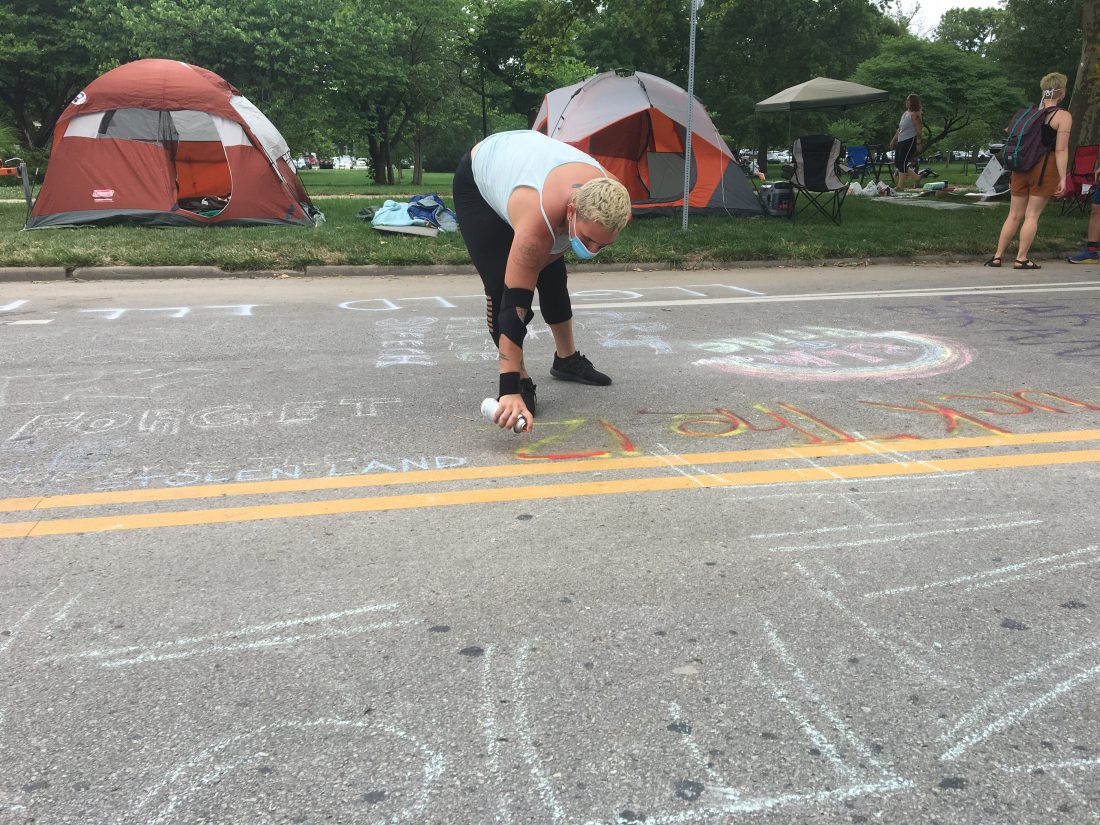 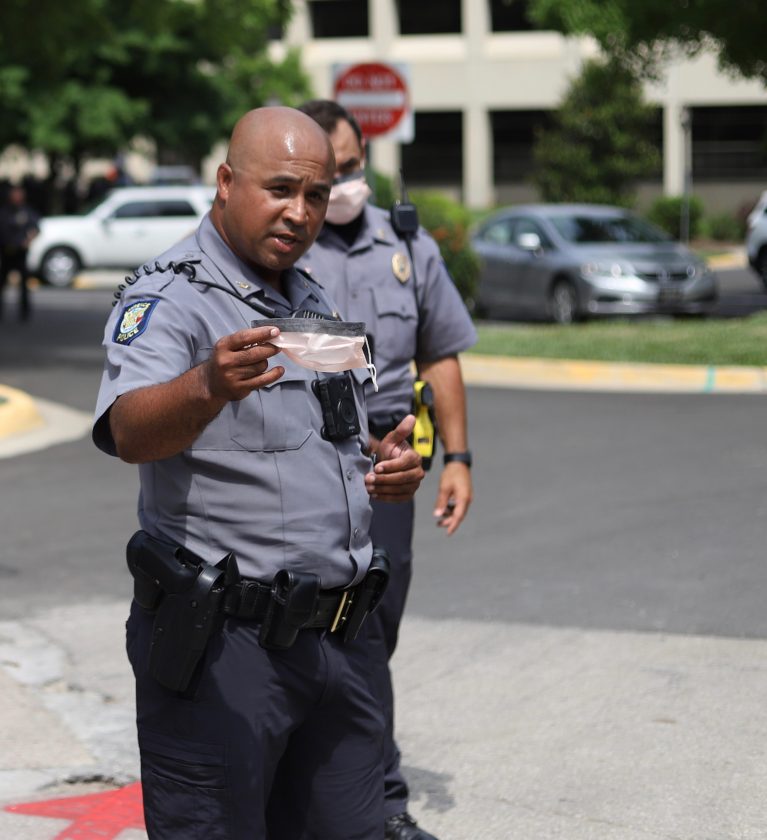 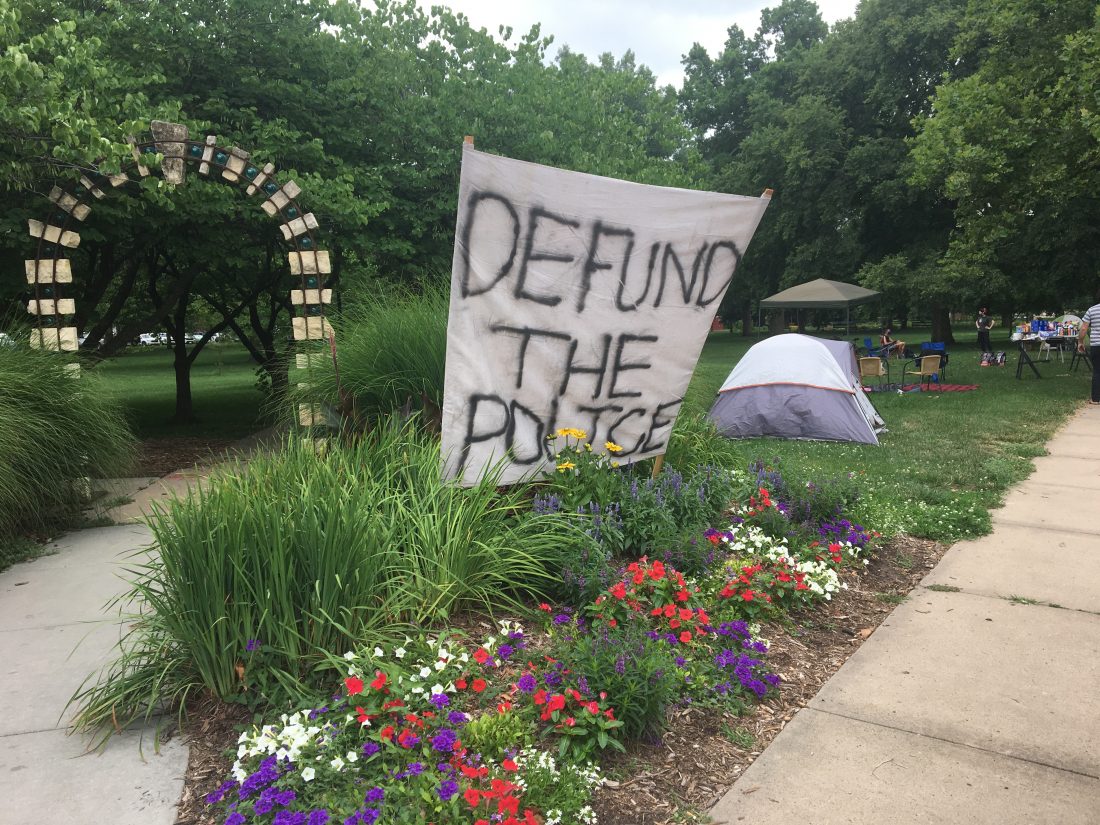 A protest sign stands in a flowerbed near 11th and Massachusetts Street on Monday, June 29, 2020. 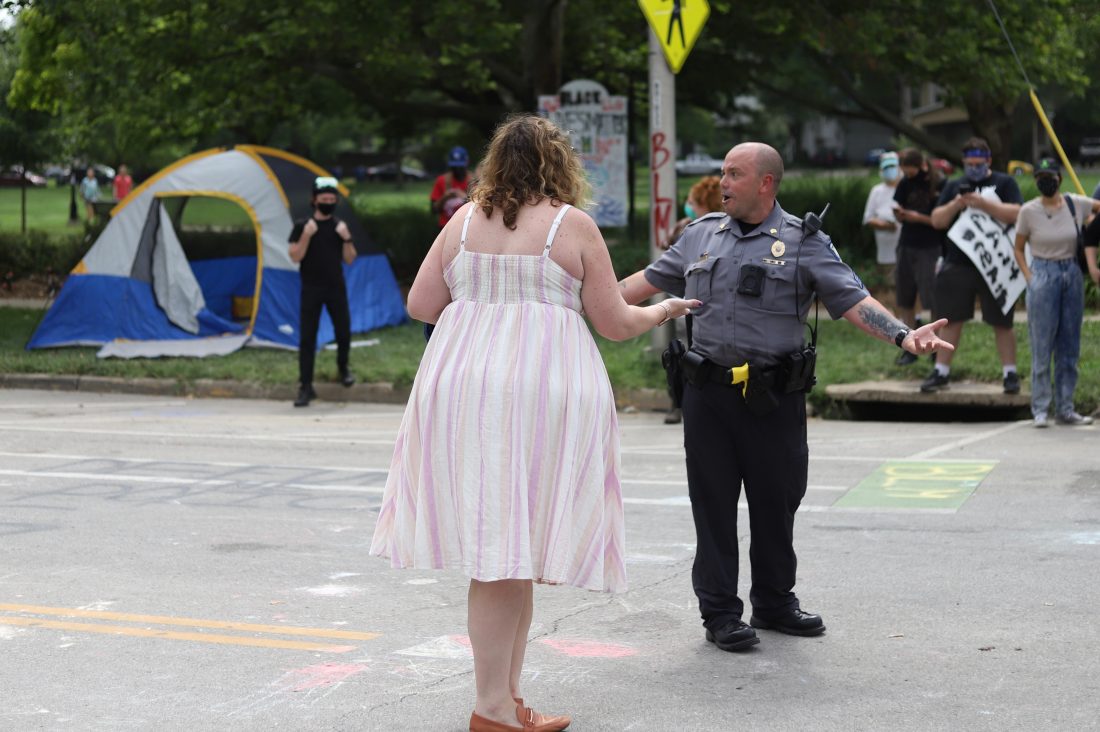 A protester speaks with Lawrence Police Sgt. Justin Rhoads on Massachusetts Street on June 29, 2020. Someone in the crowd shouted out, “Where’s your mask?” “My mask broke,” Rhoads responded.