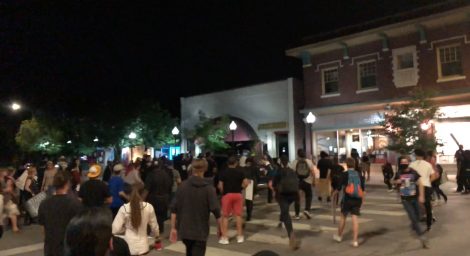 Demonstrators marching against police brutality scramble as an SUV, obscured in center background, quickly accelerates through the crowd just south of the intersection at 11th and Massachusetts streets, Sunday, May 31, 2020.

As videos and photos of multiple vehicles driving into or through crowds at Lawrence’s Sunday march against police brutality have circulated on social media, the Journal-World has attempted to gather more information about those incidents, to varying degrees of success. The Lawrence Police Department is also seeking more information.

It appears that one of the reasons witnesses and victims in these incidents are hesitant to speak with the newspaper or the police is fear of retaliation.

Any drivers visible in the videos and photos that have surfaced have appeared to be white. The march, as organizer Azja Butler put it prior to the event, was “led by black people for black people” and as a show of solidarity for black people and people of color nationwide who have not been heard when it comes to their safety and relationships with the government.

“I think I said before, in a previous interview, that I was unsure if any victims of the violent motorists from Sunday were willing (to) come forward because of their fear/disdain for LPD,” Butler said via text message Wednesday. “This is why I doubted that they would do anything to begin with.”

One witness said he had received threats after posting to social media about the march. Another witness to one of the vehicle incidents, who asked not to be named, shared another perspective.

“Due to the nature of the incident that occurred during the protest, having these questions (from the Journal-World) answered by a community member can potentially put them in harm of retaliation,” the witness said via email. “I feel that unless the individual(s) who were injured are comfortable coming forward on their own, we should not field for accounts that could also put them in harm’s way.”

River Burns, a Lawrence resident who attended the protest, told the newspaper that she witnessed two of the incidents. She said she was right in front of a man in a red vehicle while he was stopped near protesters. She and some others put their hands on his front bumper when he initially started to try to push through the protesters, she said.

Burns was pulled out of the way of the front of the vehicle “a few seconds before he drove through the rest of the crowd,” she said, but he hit four or five other people hard enough to knock them to the ground.

In another incident shortly thereafter, captured on video by a Journal-World reporter and by at least one other person at the protest, a dark green SUV approached a group of about 100 marchers at the intersection of 11th and Massachusetts streets from the south.

The reporter did not observe the vehicle’s initial approach, but by that point in the night several other drivers who were northbound on Massachusetts Street appeared able to see the crowd in the distance and turn around before getting too close. Demonstrators were also actively keeping watch and instructing cars to turn around as needed in order to prevent them from getting too close to a larger crowd that was a block east at the Judicial and Law Enforcement Center.

As a handful of people attempted to peacefully redirect the SUV, which had nearly reached the crosswalk on the south side of the intersection, the driver — without noticeable warning — quickly accelerated forward from a full stop, directly into the path of nearby marchers, the Journal-World reporter observed. As marchers attempted to scramble out of the way, the driver continued moving forward at a significant speed, beginning a 180-degree turn to the left that took the SUV into the path of more marchers before finally speeding clear of the crowd, to the south. Video taken from just feet away shows what appears to be a white woman driving the SUV through the crowd while holding what appears to be a cigarette off to the side in one hand.

“The second incident happened much quicker, and I didn’t see much interaction between the protesters and this vehicle at all before they plowed through the crowd,” Burns said in a Facebook message Thursday.

“This incident felt much more fueled by violence, the vehicle moved much faster at the crowd than the first,” she said, adding that she thought the vehicle drove over someone’s hand.

In the chaotic aftermath, as those gathered attempted to determine if anyone had been injured, calls for a medic could be heard. Nate Morsches, a registered nurse near the scene, was one of the people who responded and helped treat a person who he said had what appeared to be minor injuries. That person was able to leave on his or her own and did not immediately seek further medical assistance, Morsches told the Journal-World minutes after the incident.

“In both incidents the cars had been completely stopped, and protesters had taken place in the intersection by the masses far before cars entered the intersection,” Burns said.

The Journal-World reported Monday that Butler said there had been another incident of a car running through a crowd she was with that had broken off and gone farther south down Massachusetts Street. No one was “severely injured” because that car was moving slowly, she said.

It is unclear to the Journal-World exactly how many other incidents occurred or how many individuals could have been potentially injured. Another video shared with the newspaper shows a white truck stopped in front of a line of protesters, revving its engine until it eventually reverses at a high speed. That truck did not appear to hit anyone.

As the Journal-World previously reported, aside from the vehicle incidents there were only minor altercations during the event, and there were no clashes between protesters and law enforcement.

Lawrence Police Department spokesman Patrick Compton told the Journal-World via email this week that the department received at least one call from a motorist complaining about not being able to pass through city streets, and that the department was aware of two other incidents involving vehicles attempting to use the roadway while protesters were present.

The department is actively investigating the incident involving the dark green SUV — the one Burns said felt “fueled by violence.”

“We spoke to the driver shortly after the incident occurred, and the contents of that interview are part of the investigation and not something we would release to the public at this time,” Compton said.

Compton said the department has “no indication that any motorists were on Massachusetts Street intending to harm protestors.” In addition, “We have seen no evidence of intentional, organized efforts to inflict violence on the protestors,” he said in response to another question from the Journal-World.

He said city cameras captured video, and that footage is being retained in connection with the department’s investigation.

However, he said typically investigations begin with a victim contacting police; officers then speak to that potential victim, possible suspects and witnesses and gather all pertinent evidence. All of that information is then passed on to prosecutors for charging consideration. In the known injury incident, the victim declined help from law enforcement and medics.

“Any charges faced could vary based on the evidence gathered and statements from witnesses and potential victims,” Compton said of the involved drivers. In previous cases the Journal-World has covered, drivers who have intentionally hit and injured people with their vehicles have faced charges of aggravated battery, a felony.

Asked for her thoughts on sharing information with police, Burns said that she didn’t know if her input would be helpful, “let alone listened to.”

After hearing Wednesday evening that police said they had “no indication” that motorists intended to harm protesters, Butler said she’s not surprised. She said it is often a tactic of law enforcement to “just brush off testimonials in the media because they think they have better things to do.”

“Regardless of LPD’s intentions I think that their comment can only be described as what it is, a lie,” she said. “Which of course justifies the Black community’s distrust and begs the question of whether or not they will take the cries of the community seriously.”

Compton said the department “can only form conclusions based on evidence we have.” He also asked anyone with information or video of these incidents to contact LPD’s investigations division at 785-830-7430.

“The role of a police department in an investigation is to gather information to present to the prosecutor. In order to present a thorough record of an incident, we are required to gather information from all parties involved,” Compton said. “Based on everything that is happening in our country right now, we understand the apprehension toward law enforcement. However, keep in mind that these incidents happening around the country are not indicative of every officer, and every law enforcement agency.”

Though protesters blocking vehicles’ access to roadways is nothing new — the same has happened without incident during impromptu sports celebrations downtown — some opponents locally and nationwide have chided demonstrators for doing so.

Asked whether pedestrians always have the right of way, Compton pointed to Kansas state traffic ordinances. Those laws say that pedestrians crossing roadways shall yield to vehicles; however, “every driver of a vehicle shall exercise due care to avoid colliding with any pedestrian, and shall give warning by sounding the horn when necessary.”

Compton said LPD wants the community to know that the department is saddened that events around the country have degraded the relationship the department has with residents of Lawrence.

“However, it can, and does serve as an opportunity for us to look inward on things we can improve, and outward on how we can better serve our city,” he said via email Thursday. “We understand people’s apprehension towards law enforcement right now. We want the public to understand that we at the Lawrence Police Department are looking for ways we can improve our relationship with the community.”