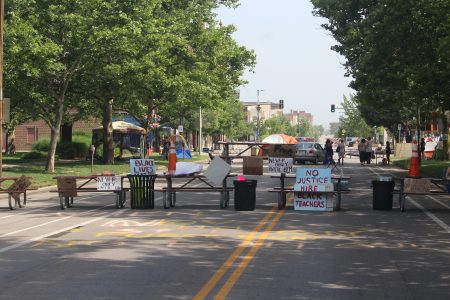 Massachusetts Street remains blocked from 11th Street to a half block to the south as protesters have setup tents in response to a banner attacking Black Lives Matter discovered Saturday in South Park.

Massachusetts Street remains closed from 11th Street to a half-block to the south to accommodate activists protesting the placement of a racist banner and letter found Saturday morning in South Park.

The banner and letter, both of which attacked the Black Lives Matter movement, were removed Saturday. The banner appeared to depict the lynching of George Floyd. A protest related to the banner and letter began on Saturday evening, and protesters stayed on site through the night and said they intend to remain at the site until certain demands are met.

About 15 protesters were at the site, and three tents have been set up on Massachusetts Street and South Park. Most protesters refused to share their names, but an an unidentified man said the group was a coalition of groups led by Black women. He said the group was demanding the Lawrence Police Department immediately open an investigation into who placed the “heinous and racist” banner with accompanying letter, the immediate release of Rontarus Washington Jr., and the defunding of the Lawrence Police Department with the reallocation of funding for social programs.

The protesters were prepared to stay at the site until the demands were met, the man said. Protesters are taking shifts to keep the site continuously occupied, one protester said.

Washington has been in the Douglas County Jail since 2015, charged with first-degree murder and aggravated burglary in connection with the November 2014 death of 19-year-old Justina Altamirano Mosso. His 2019 trial on the charges resulted in a hung jury. The case continues. Both the prosecution and defense have made motions that have delayed the case. Washington has waived his right to a speedy trial and remains in the Douglas County Jail on a $750,000 bond. Protesters in recent weeks have been calling for his release.

The man who spoke to the Journal-World said the group has been in communication with the Lawrence Police Department about the banner and letter, but refused to reveal the nature of those talks. The Journal-World asked the Lawrence Police Department on Saturday evening for comment about the banner and any actions the department may be taking related to the matter. On Sunday afternoon Sgt. Amy Rhoads said: “We are aware of the sign and are investigating the incident to determine if any crimes were committed. I don’t have any further information to provide at this time.”

A person who saw the banner told the Journal-World that it was about the size of a twin sheet. The image appeared to be spray-painted on fabric, possibly a striped bedsheet. It featured the word “OBEY” alongside a graphic image of, apparently, George Floyd, being lynched by a raised fist bearing the letters “BLM”. The banner and note were removed at some point on Saturday, but it isn’t clear how long they were up in the public area, or who removed them.

The note accompanying the poster, which appeared to be inside a plastic sheet protector, said the purpose of the self-described “Art” was to “prompt open, honest discussion about the tactics of the nationwide Black Lives Matter movement.” The letter went on to describe the movement as a “lynch mob”. and made multiple allegations that the Black Lives Matter movement was violent and authoritarian.

The Black Lives Matter movement and other activists have held protests and demonstrations across the country since Floyd died on May 25, with his neck under the knee of a Minneapolis, Minn., police officer who has since been charged with murder.

The majority of protests across the country have been largely peaceful. That also has been the case with the protests held in Lawrence.

It wasn’t immediately clear on Sunday whether the city of Lawrence would take any action to move the protesters from the stretch of street — which is near the southern entrance to downtown and the county courthouse and judicial center — in order to reopen it to traffic. When the protests began yesterday afternoon, police cars were at both ends of the stretch of street directing traffic to detour around the area. On Sunday, those police cars had been replaced by city barriers, while picnic tables also had been stacked in a barrier-like fashion. 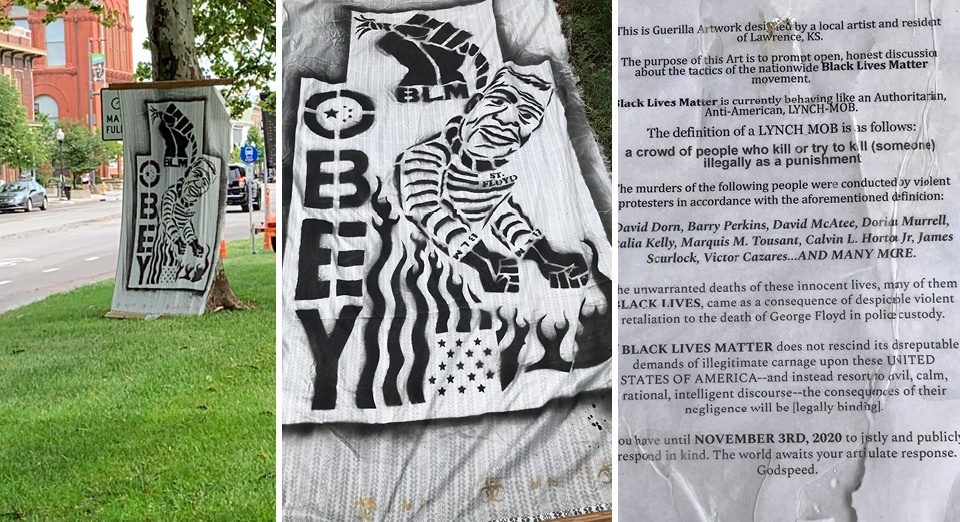 These contributed photos show a poster reportedly found near 11th and Massachusetts streets on Saturday, June 27, 2020.