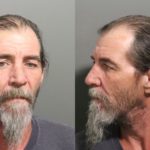 John Brown, 51, of Lawrence, was initially charged with kidnapping, a felony, as well as unlawful administration of a substance and battery, misdemeanors, the Journal-World has reported. On Thursday, he pleaded guilty to attempted aggravated battery, a level-seven felony, and criminal threat, a low-severity level-nine felony.

Brown cooperated in the prosecution of BJ Lauri, 45, in connection with charges stemming from a Jan. 19 incident, the Journal-World has reported.

The details of the case are unclear because Douglas County District Court Judge James McCabria sealed the affidavit to avoid jeopardizing the victim’s mental and emotional well-being, and both defendants have pleaded rather than proceeding to preliminary hearings.

However, Brown told McCabria Thursday that he had threatened to harm the victim — a woman who was 38 at the time — with a bat if she did not comply with Lauri’s demands.

Brown and Lauri were arrested after Lawrence police responded to a report of suspicious activity in progress around 6:30 a.m. Jan. 19 at Hy-Vee, 4000 W. Sixth St.

A woman there was asking for help from a store employee, who called police, Sgt. Amy Rhoads previously told the Journal-World. The woman reported to police that she’d been held against her will and that, during that time, “a series of alleged criminal events took place.”

Lauri was sentenced Oct. 16 to 11 years and four months in prison after pleading down from three high-severity level-one felonies, including rape, aggravated criminal sodomy and aggravated human trafficking, and four less severe offenses. But he pleaded no contest to, and was convicted of, two lesser crimes: kidnapping, a level-three felony, and aggravated sexual battery, a level-five felony.

Brown is scheduled for sentencing on Dec. 20. He has been out on bond since McCabria granted him pretrial release in September, court and jail records indicate.

Brown’s sentence will depend upon his criminal history, but McCabria said the maximum possible sentences were 34 months in prison for attempted aggravated battery and 17 months for criminal threat.