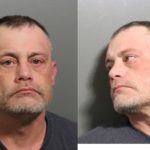 A man with a previous sex crime conviction in Missouri has now been convicted of a kidnapping and sex crime in Douglas County.

B.J. Lauri, 44, of Lawrence, pleaded no contest and was convicted of kidnapping and aggravated sexual battery, both felonies, on Thursday in Douglas County District Court.

Under the plea agreement, prosecutor Alice Walker and appointed defense attorney Branden Smith said they agreed to recommend a sentence of over 11 years in prison, though Lauri may request a departure asking for just under 10 years.

His sentencing is scheduled before Judge James McCabria on June 17.

At Lauri’s plea hearing, McCabria said that his convictions would require lifetime post-release supervision plus registration as a Kansas offender – lifetime registration for kidnapping and 25 years for the sex crime.

Lauri and another man were arrested Jan. 19 after a 38-year-old woman reported to police that she’d been held against her will and victimized. Police were alerted to the situation about 6:30 that morning at Hy-Vee, 4000 W. Sixth St., where the woman was asking for help from an employee, who called police.

More details about the allegations have not been released publicly.

Walker did not describe the state’s evidence against Lauri at his plea hearing. McCabria previously denied the Journal-World’s request for the police affidavit in the case, saying it would “unnecessarily jeopardize” the victim’s mental or emotional well-being.

Prior to his plea, Lauri was charged with rape, aggravated criminal sodomy, aggravated human trafficking, aggravated assault, criminal threat, kidnapping and robbery, all felonies. He was also charged with two misdemeanors, battery and unlawful administration of a substance, for allegedly giving a substance to impair a person without consent.

Lauri is a registered sex offender — on the Kansas registry since 2017 — who previously spent 10 years in prison for abusing a 7-year-old girl in Missouri.

He was arrested in 2004 and convicted in 2005 in Springfield, Mo., for first-degree statutory sodomy of the girl, according to Missouri court records. That conviction followed a plea deal in which an additional charge was dropped.