Man with most severe charges is previously convicted sex offender 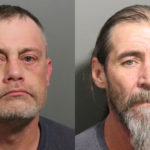 Two Lawrence men charged in a human trafficking, rape and kidnapping case are trying to work out plea deals with prosecutors, their attorneys said in court Tuesday.

BJ Lauri, 44, and John W. Brown, 51, had been scheduled to have preliminary hearings in Douglas County District Court, where their alleged victim would have been called to the witness stand. Instead, both waived those hearings and pleaded not guilty to all their charges.

Of the two men, Lauri — who is a previously convicted sex offender — faces the most severe charges in the case.

Lauri’s appointed attorney, Branden Smith, said he was in conversations with prosecutor Alice Walker about resolving the case but was awaiting a complete criminal history for Lauri to be compiled first. If a plea deal isn’t worked out beforehand, Lauri is scheduled for a trial beginning June 24.

Brown’s appointed attorney, Hatem Chahine, said his client had been helping the state on the case against Lauri, and his plea offer was contingent on that cooperation. A plea hearing for Brown was set for July 8.

Lauri and Brown were arrested Jan. 19 after a 38-year-old woman reported to police that she’d been held against her will and victimized. Police were alerted to the situation about 6:30 that morning at Hy-Vee, 4000 W. Sixth St., where the woman was asking for help from an employee, who called police.

Judge James McCabria previously denied the Journal-World’s request for the police affidavit in the case, saying it would “unnecessarily jeopardize” the victim’s mental or emotional well-being if details from the case were made public prior to a preliminary hearing.

Brown is charged with kidnapping, a felony, as well as unlawful administration of a substance and battery, misdemeanors.

Both men were in custody Tuesday.

Lauri is a registered sex offender who previously spent 10 years in prison for abusing a 7-year-old girl.

He has been on the sex offender registry in Kansas since 2017, according to the registry.

Lauri was arrested in 2004 and convicted in 2005 in Springfield, Mo., for first-degree statutory sodomy of a 7-year-old girl, according to Missouri court records. That conviction followed a plea deal in which an additional charge was dropped, and Lauri was sentenced to 10 years in prison in Missouri.

At the time of his arrest here, Lauri indicated in a court document that he was unemployed.

Brown was released on $50,000 bond in early March but re-arrested last weekend for allegedly failing to comply with conditions of his supervised pre-trial release, according to court and jail records. He said he had been working at a construction job.

Brown has a history of drug abuse.

While on pretrial release, he tested positive multiple times for drugs, including methamphetamine, amphetamine and cocaine, according to an affidavit filed by his court services officer.

His attorney said Tuesday that Brown had gotten a substance abuse evaluation that recommended he get in-patient treatment.

Brown has a felony drug conviction — for possession of opiates — stemming from a 2012 case in Jefferson County, according to Kansas Department of Corrections records. Brown was discharged from his sentence in that case in 2014.