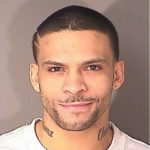 A man with multiple previous felony convictions picked up two more in Douglas County — one from an armed robbery at a laundromat — and is being sent back to prison for more than three years.

Andre R. Brown, 30, was sentenced to 40 months in prison Friday in Douglas County District Court. Judge Kay Huff said that would be followed by a year of post-release supervision.

She said Brown was on parole in a Shawnee County case when he was charged with the new crimes, and that his new sentence would be in addition to any prison time he owes for parole violations.

Brown previously pleaded no contest to being a felon in possession with a firearm, in connection with the laundromat robbery, and possession of methamphetamine in a separate drug case.

Brown served prison time for three aggravated robberies he committed in 2008 in Shawnee County, according to Kansas Department of Corrections records. He also has a 2007 conviction for being a felon in possession of a gun in Shawnee County.