Several residents of Big Springs voiced opposition to changes to the Douglas County zoning regulations, arguing the proposed changes may hinder their ability to operate businesses in that community.

The Lawrence-Douglas County Metropolitan Planning Commission on Monday heard their concerns after it began discussing the county staff’s proposal for new zoning and land use regulations for the unincorporated areas of the county.

The residents said they oppose changing their community to a zoning district known as a “village” district. The village district aims to establish a unique set of standards and allow a variety of uses without the requirement to rezone.

The residents said they want to remain with their current zoning district, known as B-2, which will be renamed General Business under the proposed changes. They said the village district would hinder their ability to operate businesses from their residential properties.

However, planner Mary Miller addressed some of their concerns when she said homes with businesses operating out of them that currently exist in the area would be able to continue to operate. She also said they would be able to rebuild their homes and operate their businesses if they are ever destroyed.

One resident appeared angry about the changes, prompting Commissioner Karen Willey to tell him that she was only asking questions about his situation so the commission could consider making changes to the regulations that address his issues. The resident later stormed out of the meeting after arguing with the commissioners from the public gallery about the issue.

Another resident asked why Lone Star Lake got its own specific district and wondered if Big Springs could have its own district allowing its current regulations to remain.

“That is a possible discussion,” said Commissioner Jim Carpenter. “There seem to be some characteristics about Big Springs that don’t align with all the other areas.”

Although the residents of Big Springs voiced their concerns, Willey said none of the other unincorporated communities — such as Stull, Vinland and others — voiced concerns. She also noted that most of the feedback heard during public meetings on the changes was “generally positive.”

“I don’t want to lose track of that because we have an issue to deal with in Big Springs,” she said.

The proposed regulations include the creation of new agricultural districts for properties in the rural parts of the county and adds a step to the process of subdividing land that is located outside of the urban growth area that surrounds Lawrence.

The new step would require an application from a landowner to subdivide their land to go through the planning commission, providing an opportunity for the public to weigh in. Currently, the county’s zoning regulations allow applications to be administratively approved and they do not have a specific public process.

Other proposed major changes include simplifying industrial and business districts and the creation of cluster preservation districts to accurately zone already established residential areas, among others.

The Planning Commission did not take any action on the proposal and directed staff to analyze possible revisions that would address the Big Springs residents’ concerns. The commission will consider the proposal again during its January meeting. 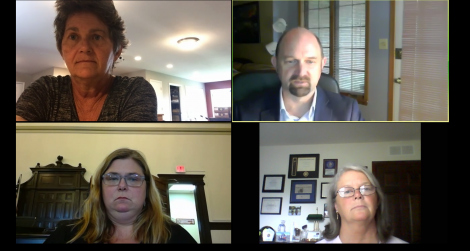