The Douglas County Courthouse at 1100 Massachusetts St., which houses the county government, is shown on Sept. 15, 2018.

As Douglas County planning and zoning officials received feedback on proposed changes to the county’s zoning codes, they found little pushback from rural residents regarding the updates.

“Most of our feedback has been in favor (of the changes),” said Tonya Voigt, director of zoning for the county. “I think some people would want even more done.”

Voigt and Mary Miller, a city and county planner, said county officials may do just that when they send a revised draft of the proposed zoning code changes to the Lawrence-Douglas County Planning Commission next month. The Planning Commission’s work on the proposal will kick off the approval process that Voigt and Miller hope will be completed by the end of February.

But before that process begins, the public will soon get a first look at the revised proposal. Miller said the county could release the revision as early as Monday.

Voigt and Miller officially unveiled the proposed changes during a Douglas County Commission meeting in September. They then spent October and November collecting feedback from county residents.

One of the most commonly requested changes that will be included in the revised proposal will be an increase in notification area when someone applies for rezoning. Currently the county’s regulations follow state statutes and notify residents within 1,000 feet of the proposed rezoning site.

With feedback in hand, Miller and Voigt said they revised the proposal to include an increased notification area up to a quarter-mile from a rezoning site, among other changes. But many residents asked for the notification area to be increased even more, which may be one of the details county officials choose to expand on, Voigt said.

“Some of the property owners will want a half(-mile) or a mile,” Voigt said. “The commission may go further.”

When the revision is released, Miller said, the recent changes will be outlined in red text. She said the county wanted to give the public a chance to see the revised draft of the code before it is submitted to the Planning Commission for consideration on Dec. 16. 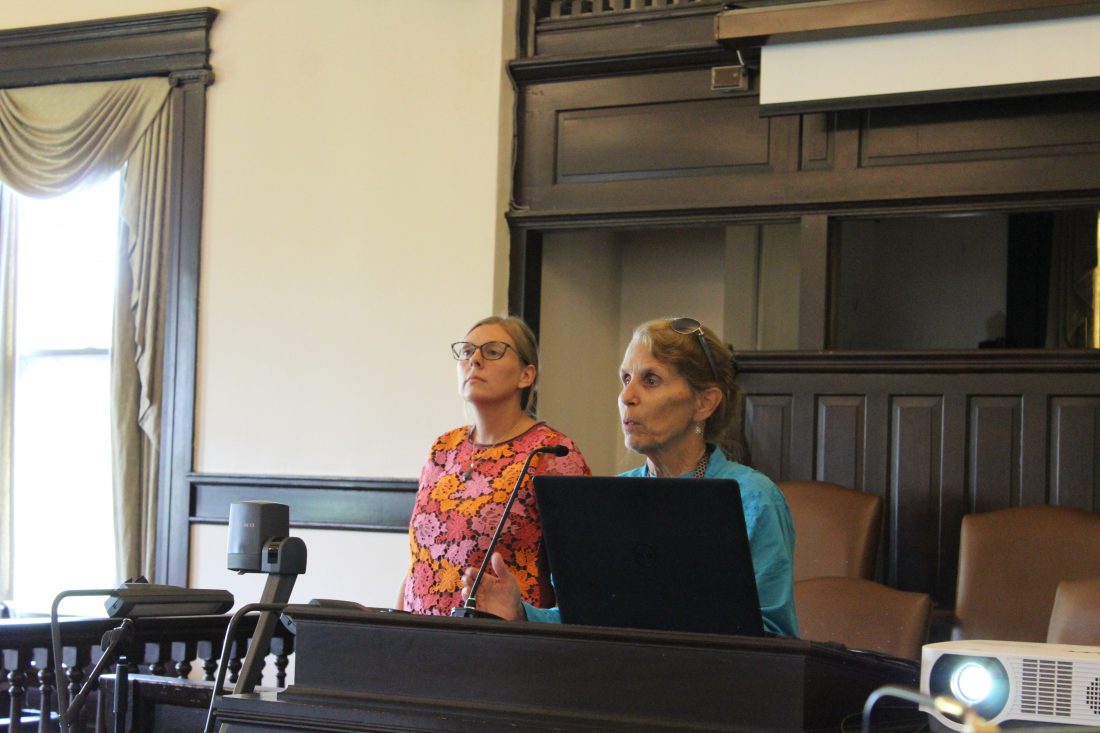 When Voigt originally informed the County Commission of her timeline, with the goal to finish the process as early as January, Commissioner Patrick Kelly said it was ambitious. However, the process is on track so far and could be finished by late January if it continues smoothly.

If needed, Voigt said the moratorium would likely be extended another month, but she hoped the process would wrap up before its expiration date, which is Feb. 21.

“We do not want that to happen if we can help it,” Voigt said of the moratorium expiring before the approval of new codes. “We kind of made a promise to the public that we were going to try really hard (to meet it).”

One of the biggest proposed changes aims to address an increase in residential development in rural parts of the county, which county commissioners previously called “shocking” and “disappointing.”

Under the proposal, most rural landowners would have to change their properties from one zoning type to another before they could start the process of dividing them into smaller residential lots. That would require the approval of the Planning Commission — and would give members of the public a chance to weigh in at the Planning Commission’s meetings.

The majority of rural land in the county would fall into a zoning district known as “Ag-1” under the new rules. Miller and Voigt said Ag-1 would be for traditional farming operations on large parcels of land. But another kind of rural zoning, “Ag-2,” could be used for smaller agricultural operations, such as a winery, that sit on at least 20 acres of land, and it also could be subdivided into a number of smaller residential lots.

For a county resident to subdivide her land for residential use, she would need to go through the Planning Commission’s public process to rezone property from Ag-1 to Ag-2. If the rezoning were approved, the landowner could then submit an application to the county for a certificate of survey, which is the first step in the process of dividing a parcel of land into smaller lots.

“It puts an extra step in the process,” Miller said. “They can still do what they can do today, just with the extra step.”

Along with the changes to agriculture and residential zoning, the county proposed making several other changes to the codes that could affect unincorporated communities, future business operations and vacation property owners near Lone Star Lake.

Some other changes in the proposed zoning and code ordinances include:

• Creation of Cluster Preservation District: The purpose of the CP district is to prevent already established residential developments in rural areas from having to rezone. These areas were developed through certificates of survey prior to the moratorium established in August.

The district also aims to provide a suitable zoning district for medium-density residential development within the Urban Growth Area while preserving agricultural lands and open space by clustering development. Some current residential areas outside of the Urban Growth Area will be converted to CP district, but no new rezoning of this type of district will be allowed outside of that area when the regulations are approved.

• Creation of Village District: The purpose of the Village District is to continue the existence of unincorporated communities — Big Springs, Lone Star, Stull, Vinland and others — by establishing a unique set of standards for them and allowing a variety of uses without the requirement to rezone. Currently these areas are zoned for agricultural or business uses.

Miller previously said this would allow those communities to grow and become “more vibrant” without the need to rezone. However, some businesses may need conditional use permits.

• Creation of Lone Star District: The purpose of the Lone Star District is to establish a district for lots that are located around Lone Star Lake and were originally platted in the 1940s. Currently, they are small residential lots zoned for agriculture uses, making it difficult for property owners to meet requirements to build on their property.

The new zoning district would provide a more accurate description and set of rules for development on the land. However, the district does not allow for the creation of new or additional lots.

Other changes include simplifying industrial and business districts, Miller said.

The full revised draft can be found on the county’s Zoning and Codes website, www.douglascountyks.org/depts/zoning-and-codes. Visitors to that website will also be able to find video, audio and information pamphlets about all of the changes.