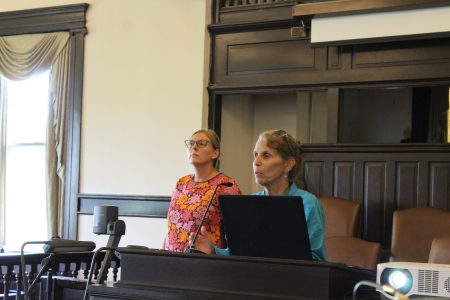 Douglas County leaders discussed a slate of proposed changes to the county’s zoning regulations on Wednesday, including a measure that would allow for more public feedback before rural land could be divided into residential lots.

Zoning Director Tonya Voigt and Planner Mary Miller presented a broad overview of the proposed regulations to the County Commission during a work session. They explained that the regulations would create several new zoning districts that would set guidelines for agricultural, industrial, business and residential land use in the county.

Under the proposal that Miller and Voigt presented, most rural landowners would have to change their properties from one zoning type to another before they could start the process of dividing them into smaller residential lots. That would require the approval of the Lawrence-Douglas County Metropolitan Planning Commission — and would give members of the public a chance to weigh in at the planning commission’s meetings.

The majority of rural land in the county would fall into a zoning district known as “Ag-1” under the new rules. Miller and Voigt said Ag-1 would be for traditional farming operations on large parcels of land. But another kind of rural zoning, “Ag-2,” could be used for smaller agricultural operations, such as a winery, that sit on at least 20 acres of land, and it also could be subdivided into a number of smaller residential lots.

For a county resident to subdivide their land for residential use, they would need to go through the Planning Commission’s public process to rezone their property from Ag-1 to Ag-2. If the rezoning were approved, the landowner could then submit an application to the county for a certificate of survey, which is the first step in the process of dividing a parcel of land into smaller lots.

County Commissioner Nancy Thellman said she liked the idea of a more public process for subdividing land. She emphasized that “this isn’t about shutting down all building, all housing and all development” in the county.

“This is about having a process that’s thoughtful, public and transparent,” Thellman said.

The zoning discussions are beginning about a month after the commission put a temporary halt to processing requests to subdivide land in the rural parts of the county. That was done in response to a request from Voigt, who told commissioners it would give the county time to consider zoning regulation changes that better reflect how the county government views the use of rural land.

At the time, Voigt told the commission that changes were needed because of a drastic increase in applications to subdivide land in rural parts of the county, and she said some rural residents had suggested the current regulations were too lax.

All of the proposed zoning changes are published on the county’s zoning and codes page, www.douglascountyks.org/depts/zoning-and-codes.

County Administrator Sarah Plinsky said the county expects the process of considering the changes to take until early 2020.