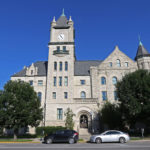 The rural areas of the county are where the Douglas County community least wants development to occur, but the county’s zoning regulations make it one of the easiest places to be developed, Karen Willey said.

“The processes we have in place are absolutely turned on their heads, in terms of how easy or difficult that process is,” said Willey, who is a county appointee on the Lawrence-Douglas County Planning Commission.

Soon, the county may start to change that with a temporary moratorium that would halt efforts of rural landowners to divide their property into new residential lots.

Willey said she was only representing herself when she spoke to the Douglas County Commission at its meeting Wednesday. She was one of several rural residents who expressed concern with the county government’s regulations on rural development by subdividing land for residential use, which more than tripled the county’s average in 2018.

Willey and the other concerned residents suggested the regulations are too lax and the county needs to make changes to ensure it protects a distinction between rural and urban areas, which is a goal in the county’s comprehensive plan.

The commissioners said they may do just that after Tonya Voigt, director of zoning for the county, presented data to the commission highlighting the spike in residential development. Voigt said rural residents have voiced concerns that increased residential development in the rural parts of the county is contributing to the loss of workable farmland and increased traffic on the county’s rural roads, among other issues.

“I think we need to take a step back and look at this process to find a way to support our goals that we set so many years ago,” said Michelle Derusseau, commission chair.

Voigt said her office began looking into developing new zoning regulations in November, and she has set a possible timeline to bring proposed changes to the county’s zoning codes in the near future. She said the changes are needed to more accurately reflect the county’s view of rural land and what it should be used for, which is outlined in the Lawrence and Douglas County comprehensive plan, Horizon 2020. The comprehensive plan states “new residential development in Douglas County should protect and enhance the rural character and quality of unincorporated portions of the county.”

Voigt said regulation changes would also align with the proposed comprehensive plan for 2040, which calls for the county to “identify and adopt appropriate land division and zoning regulations that support rural character” and “minimize agricultural land conversion to other nonagricultural uses.” The proposed comprehensive plan has not yet been approved by the Lawrence City Commission or the Douglas County Commission. 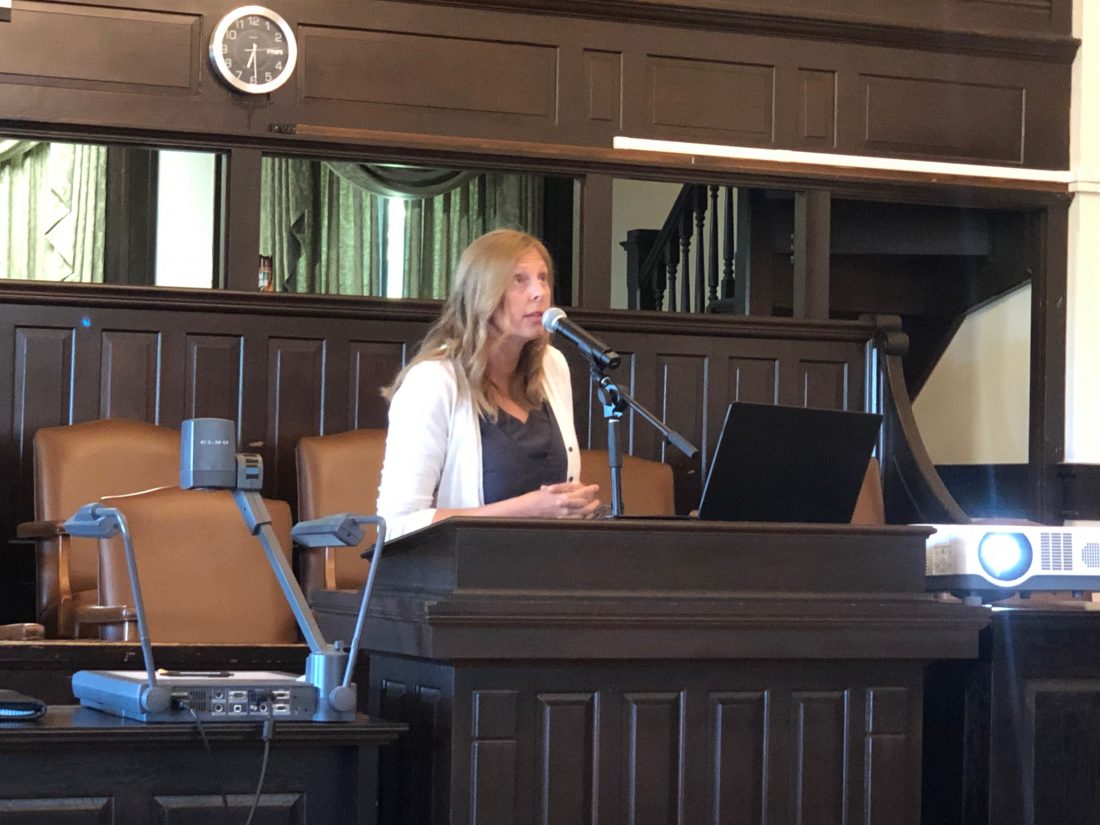 Tonya Voigt, director of zoning for Douglas County, speaks to the Douglas County Commission on Wednesday, Aug. 14, 2019. She presented data showing an increase of residential development in rural parts of the county.

In the meantime, Voigt asked the commission to consider putting a temporary halt on processing applications for certificates of survey, which is an application to subdivide a parcel of land that is 20 acres or larger into smaller residential lots. Voigt said the county’s legal counsel is drafting a moratorium for the county’s processing of the applications, which is an item on the commission’s Wednesday meeting agenda. Derusseau and commissioners Patrick Kelly and Nancy Thellman all said they would be in support of the moratorium.

“Some folks think it’s inevitable that the countryside is going to fill up,” Thellman said. “But we’ve made a concerted effort in Douglas County to say there is value to that empty space, that agricultural and rural space.

“There is a strong sentiment out there that people here want rural Douglas County to be rural,” she added. “We need to correct this. We need our lofty language in our plans to be reflected in our on-the-ground processes.”

In 2018, the county began to see a drastic increase in requests to develop in rural areas. According to data presented to the commission, the county zoning office received an average of 17 applications for certificates of survey per year between 2007 and 2017. But in 2018, the applications jumped to 60 — more than three times the previous average.

“I find that number in 2018 not only shocking, but very disappointing,” Derusseau said. “Last year looks like it was a free-for-all.” 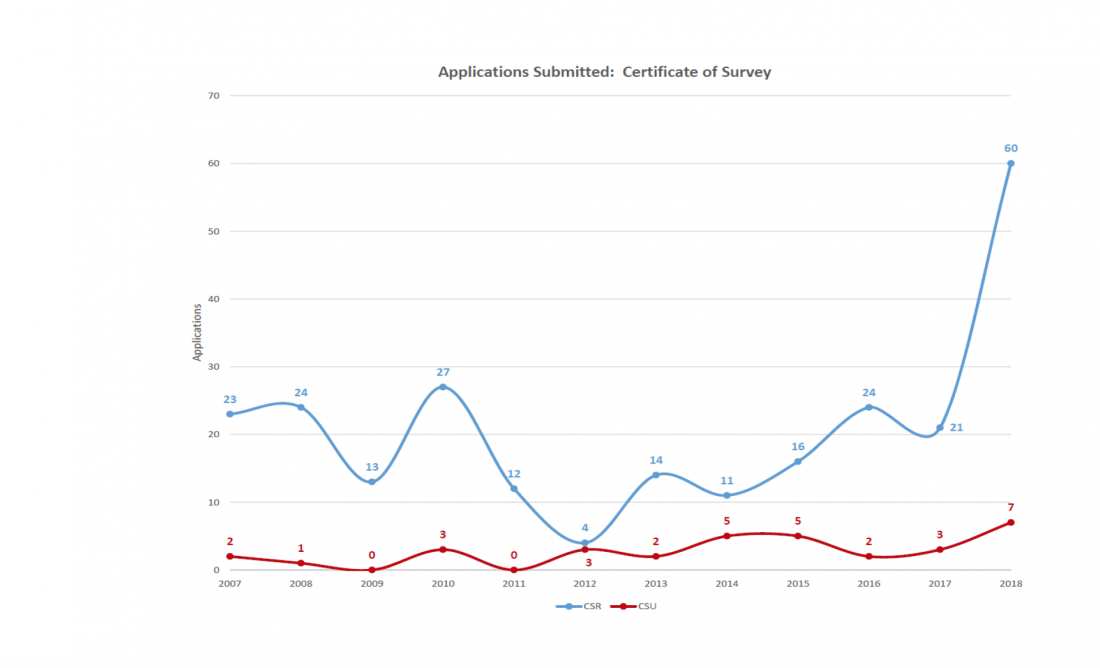 Voigt said one of the main issues in the code is the lack of notifying rural residents of possible development in the area. She said the current code allows for residents to appeal applications for certificates of survey, which then triggers a requirement for the county to inform all residents within the development area.

But the possibility of an appeal only occurs if a resident is aware of an application being processed, which may be leading to the county giving approval to development plans without ever hearing from those who oppose them. She told commissioners that the county staff has never received an appeal on a certificate of survey application, with many rural residents only learning of approved residential development when houses are already being built.

Additionally, the applications are considered for approval by administrative staff rather than a public board, which may be how developers see the process as being easier, Voigt said. Willey called that a “lack of public process” for the applications for certificates of survey.

“There is no opportunity for that rural voice to speak into that process,” Willey said. “That would never fly in the city and we want to make sure we put that equity back into the piece.”

Another issue is the lack of criteria that the county would consider during the appeal process. Voigt said new regulations should lay out criteria to make sure the appeals process is consistent.

Voigt said the regulation change could also give the county a chance to further restrict what kind of development is allowed in the rural areas. The county could develop zoning districts for the rural area that identifies areas intended for agricultural uses or residential land uses.

By doing so, the regulations could require non-farming development applications on the agriculture areas to be rezoned, which would allow county staff to consider the project and decide if it aligns with the county’s view of rural land. It could also include a requirement to notify nearby residents of the rezoning request, which would in turn give them the opportunity to appeal.

However, Thellman said when the commissioners begin making changes to the codes, they will likely hear pushback from some residents and developers.

“There is a need to balance property rights with county policy and county values,” she said. “But I think we need to be pretty resolute in this effort to correct this situation.”