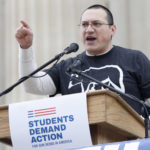 Dustin Stumblingbear, of Lawrence, addresses protesters at the March For Our Lives rally Saturday, March 24, 2018, on the Kansas Statehouse grounds in Topeka.

Dustin Stumblingbear has withdrawn his candidacy for the Lawrence City Commission.

Stumblingbear’s exit from the race means that a primary election is not currently required unless another candidate files to run in the next few weeks. The seats of commissioners Stuart Boley, Leslie Soden and Matthew Herbert are up for reelection this year, and both Soden and Herbert have announced they will not seek reelection.

Stumblingbear did not immediately return a phone call from the Journal-World Monday afternoon regarding his decision.

City ordinance requires a primary when the number of candidates is more than two times the number of open seats. The filing deadline for the election is noon on June 3, and the primary election would be Aug. 6, if required.