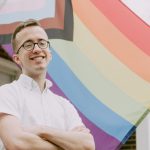 Social advocate and community board member Joey Hentzler has filed for election to the Lawrence City Commission.

Hentzler, 25, has lived in Lawrence since 2011, but he said he has thought of the city as his home for longer than that. When he was a teenager and had not yet come out as gay, he often visited Lawrence, where he felt more comfortable than he did in Topeka. But after he officially moved to Lawrence to attend the University of Kansas, he said, he began to realize that not all his neighbors were being afforded the same safety and space to build their livelihoods that he found.

“I believe Lawrence can and must do better to make sure that we have equal opportunity and fair systems for all residents,” Hentzler said. “That is achieved when all Lawrencians are allowed to participate fully in all aspects of our city’s life: social, cultural, economic and civic. Then we’re going to be building stronger neighborhoods and a stronger community.”

For instance, Hentzler said that he was particularly struck by the Lawrence-Douglas County Health Department’s recent Health Equity report, which showed significantly worse outcomes in several health measurements for low-income people and minorities in the community. He said that as a commissioner, his priorities would be addressing the city’s affordable housing shortage; fighting against systemic racial disparities; and making Lawrence a more sustainable, environmentally friendly city.

In addition to those three main issues, Hentzler said he would like to address protections for immigrant residents, access to reproductive health care and progressive revenue streams.

Some of those causes are not unfamiliar to Hentzler. Hentzler has worked since 2017 for Kansas Appleseed, a nonprofit, nonpartisan advocacy organization that works to address social, economic and political injustice in Kansas, according to its website. He currently serves as the organization’s director of advocacy. He also serves on the Executive Board of the Douglas County Extension Council, which is part of the Douglas County K-State Research and Extension office.

The seats of commissioners Leslie Soden, Matthew Herbert and Stuart Boley are up for re-election this year. Soden has announced she will not be running for re-election.

City ordinance requires a primary when the number of candidates is more than two times the number of open seats. The filing deadline for the election is noon on June 3, and the primary election will be held Aug. 6 if needed.