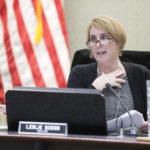 In this file photo from Jan. 8, 2018, then-Lawrence Mayor Leslie Soden delivers the State of the City address during a Lawrence City Commission meeting at City Hall.

Lawrence City Commissioner Leslie Soden has announced that she will not seek re-election next year, but she says there are several things she still hopes to accomplish in her last year in office.

Soden let her fellow commissioners know of her plans toward the end of the commission’s meeting Tuesday evening. Soden, whose term runs through 2019, would need to file for re-election this summer.

Soden told the commission that, although it’s a little early, she had mentioned her plans to others and didn’t want the news reaching the commission otherwise. As for her reason to not seek re-election, Soden said she is considering moving to Arizona, perhaps just part time, to be closer to her dad.

“My dad lives in Phoenix, and I’ve seen him, like, twice since we’ve been elected,” Soden said. “I kind of just need more freedom of movement.”

Soden was one of three newcomers to the commission elected in 2015, along with Mayor Stuart Boley and Commissioner Matthew Herbert. The three unseated longtime commissioners following a controversy regarding Rock Chalk Park. Soden was the top vote-getter in that election, and she had emphasized the need for the commission to go in a new direction. Soden ran unsuccessfully for an open Douglas County Commission seat this fall, finishing second in the Democratic primary.

Soden, 47, previously ran her own pet sitting business, but began a new job in August as an insurance agent. Soden previously served as a member of the city-county Joint Economic Development Council and is a past president of the East Lawrence Neighborhood Association.

When asked if there are certain things she still hopes to help accomplish in the remaining year of her term, Soden emphasized the importance of securing the future of downtown Lawrence. She said one of the reasons she originally got involved with city politics was downtown development, and that she thinks the next year will be important as the city continues its work on its Downtown Master Plan.

“That’s something, of course, that’s always been really important to me, is managing that in a sustainable way and in a way that doesn’t just crush the historic value that downtown has for a lot of people,” Soden said. “The Downtown Master Plan, of course, will cover some of that.”

In addition, Soden said there are several other topics she’d like to see the city make progress on next year. Those include making fiber internet more available, providing more services for workers in the city’s business parks and restructuring the position of commissioner so that a broader cross-section of people can hold office. Commissioners are part time and make $9,000 per year, and Soden said that structure is not an option for most people.

“There is a real structural issue with the people that can run to be a commissioner and actually do the duties of a commissioner,” Soden said. “And better pay is something that will be able to get a more diverse population into our local politics, and I think that’s really important.”

Still, Soden said she thinks the current commission is a lot more representative of the people of Lawrence than former commissions, and that she is proud of the work the commission has done over the past few years. She said that includes the hiring of City Manager Tom Markus, the creation of a strategic plan and efforts to improve affordable housing.