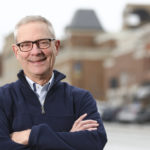 Stuart Boley is pictured on Thursday, Dec. 28, 2017 outside City Hall.

Retired auditor and community volunteer Stuart Boley has filed for reelection to the Lawrence City Commission.

Boley was elected to the commission in 2015 along with fellow newcomers Leslie Soden and Matthew Herbert. Boley, who served as mayor last year, said he’s learned a lot over the past four years and that the commission has made some progress in governance and on other issues in that time.

“And I’d like to try to continue that progress,” Boley said. “I’m interested in trying to provide responsible, progressive government for the citizens of Lawrence.”

Boley, who is a retired auditor with the Internal Revenue Service, said that one of main issues he’d like the city to continue improving is its budgeting and finance practices. He noted that the city had been in the process of adopting a new priority-based budgeting process and that this spring’s budget would be the first year for the new method.

Boley, who served on the city’s Affordable Housing Advisory Board for two years, said another important issue to continue addressing is the city’s shortage of affordable housing. Though voters have approved a sales tax to generate funding for affordable housing, Boley said he thought the city should learn more about ways for philanthropic donors to get involved, along with government and nonprofits, to more widely address the issue.

“There needs to be a variety of things that we do to address this problem, not just simply be content to work with the money that the voters have provided us so generously,” Boley said. “Because that’s one tool, it’s not the only tool.”

Originally from Lenexa, Boley earned his Bachelor of Arts in English and modern European studies from the University of Kansas. After working in different areas of the country, he returned to Lawrence in 1983. Boley, 64, retired in 2009 after working as an IRS auditor for 32 years. He served as the administrative officer of the Douglas County Community Foundation from 2011 to 2017.

The seats of Boley, Soden and Herbert are up for reelection this year. Soden has announced that she will not be running.

City ordinance requires a primary when the number of candidates is more than two times the number of open seats. The filing deadline for the election is noon on June 3, and the primary election, if needed, will be Aug. 6.