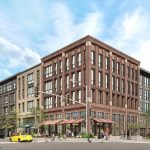 This conceptual rendering, dated Feb. 15, 2019, shows a revised design for the Hub apartment and retail building that developer Core Spaces had proposed for the corner of 11th and Massachusetts streets in downtown Lawrence.

After hearing hours of comments on proposed plans to build a five-story apartment and retail building complex in downtown Lawrence, the Lawrence City Commission early Wednesday morning denied the project the necessary certifications to move forward.

With unanimous votes cast shortly after 1 a.m., the commission denied a certificate of appropriateness to Chicago-based developer Core Spaces to build the Hub on Campus development at the northeast corner of 11th and Massachusetts streets in downtown Lawrence and determined the project did not meet downtown design guidelines. The commission also unanimously denied the demolition of structures at the site and denied special use permits for the project. In their decision, commissioners cited the local Historic Resources Commission’s earlier decision to deny the two required certifications.

• With denial of controversial downtown apartment plans, mayor says developer will need to start over

The plans for the project called for two buildings to stretch the width of the block between Massachusetts and New Hampshire streets and included more than 550 bedrooms targeted to college students. The primary building would have been the five-story apartment building with ground-level retail space along Massachusetts Street, and the secondary building would have been a three-level parking garage and mixed-use structure on the east side of New Hampshire Street.

Due primarily to the main building’s height and size, the historic preservation board denied the certifications. Core Spaces then appealed that decision to the Lawrence City Commission.

During the meeting, representatives for Core Spaces asked the commission to consider the project’s potential economic benefits to the downtown area. They also argued the height of the proposed building is comparable to other buildings that already exist in the downtown area: specifically, the buildings on New Hampshire Street housing the 901 Lofts and 888 Lofts apartments and the Marriott TownePlace Suites hotel.

But many residents expressed opposition to the project during public comment, arguing that it would change the face of downtown Lawrence, create more high-priced housing while affordable housing is an issue in town and cause parking problems in the area. Some opponents also argued that the project wouldn’t actually deliver the economic benefits that the developers promised.

For much of the meeting, opponents of the project could be seen in the audience holding signs with slogans such as “No Luv 4 The Hub” and “No Hub.”

Some residents also commented in support of the project, arguing it would benefit downtown businesses and the Lawrence economy.

After hearing the comments, mayor Lisa Larsen asked whether the developer would be willing to work with the Historic Resources Commission to create a new proposal that met the board’s guidelines. Rodney King, Core Spaces’ senior vice president for development, told the commissioners the company would be willing to work with board to find a solution. Larsen said she would prefer to send the project back to the board rather than denying the permit outright.

One commissioner, Matthew Herbert, said he thought the project shouldn’t move forward until the city had completed its new downtown master plan, but Larsen noted the commission may not have legal authority to deny the request on those grounds.

In contrast, commissioner Leslie Soden said she thought the other commissioners were making the issue too complicated and that upholding the Historic Resources Commission’s ruling was the obvious course of action. Commissioner Jennifer Ananda also said she would uphold the board’s finding, but she also said the design guidelines for historic districts should be rewritten and argued that the vagueness of the existing guidelines “made it impossible” for the developer to comply with them.

After hearing from Soden and Ananda, Larsen said that because there would not be a consensus to send the issue back to the preservation board, she too would uphold its ruling. Herbert and Boley soon followed, and the commission voted unanimously to deny the appeal and the permits.