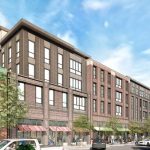 This rendering from February 2019 shows a revised concept for an apartment and retail building across from the Douglas County Courthouse, right, at the corner of 11th and Massachusetts streets in downtown Lawrence.

City leaders will have the final word on controversial plans to build a five-story apartment and retail building near the southern entrance of downtown Lawrence.

Chicago-based Core Spaces filed plans last October at City Hall for the project proposed for 11th and Massachusetts streets, called Hub on Campus, which would provide more than 550 bedrooms targeted to the college student population. The city’s historic preservation board denied the project two required certifications, but this week the developers appealed that decision to the Lawrence City Commission.

In an email to the Journal-World, leaders with Core Spaces said that they thought the project should be reconsidered.

“Core Spaces believes strongly that the Hub on Campus Lawrence project would have a positive impact on the City of Lawrence, particularly in the downtown area,” said Core Spaces Principal and Executive Vice President Chad Matesi. “We filed this appeal to provide the City Commission with the opportunity to fully consider the merits of the project.”

Last month, the city’s Historic Resources Commission voted unanimously to deny a certificate of appropriateness for the project, finding instead that the project would encroach upon, damage or destroy the environs of three nearby historic buildings: the English Lutheran Church, the Douglas County Courthouse and the former bank building that currently houses the Watkins Museum. The project is located in the Downtown Conservation Overlay District, and the HRC also voted unanimously that the project does not comply with the city’s downtown design guidelines.

Planning and Development Services Director Scott McCullough said that appeals were a right and that the developer did not have to allege any issue with the HRC decision. McCullough said the appeal would let the developer present the project and argue for its approval before the commission. Commissioners then essentially make a unilateral decision based on the same criteria and guidelines that govern the HRC’s decisions.

“They don’t have to take into account the HRC’s ruling,” McCullough said. “They can make their own determination against the criteria.”

One of the HRC’s main arguments was that even after changes to the original plans, the project’s mass, height and scale in relation to other downtown buildings was inappropriate and would hurt the environs of the three historic buildings. In response to initial feedback from the HRC, the developers reduced the project’s size and varied the building materials in an effort to make it appear like multiple smaller buildings. 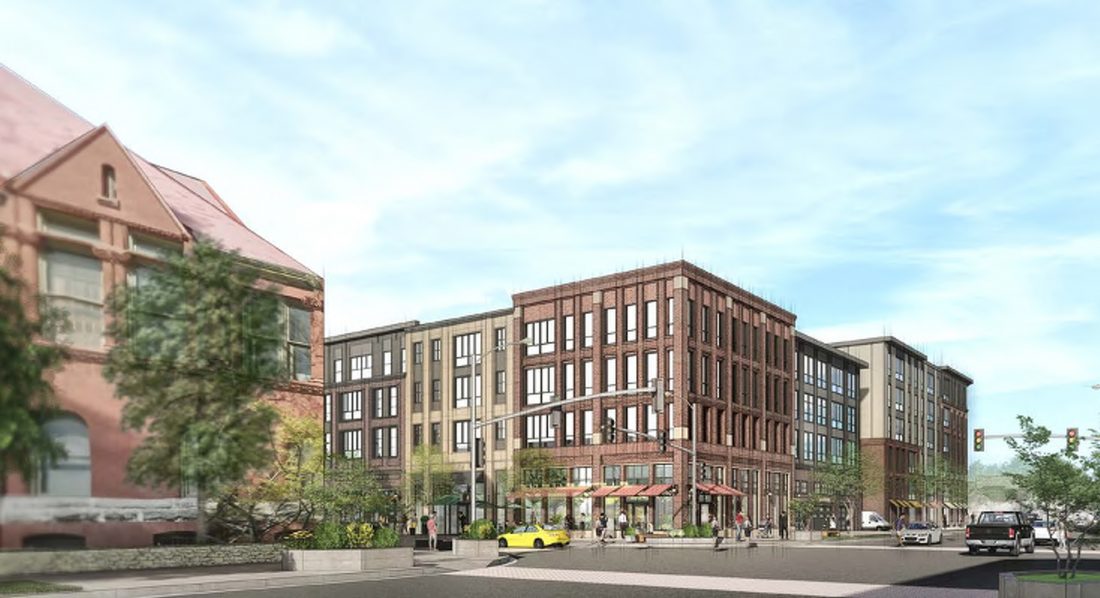 This rendering from February 2019 shows a revised concept for an apartment and retail building across from the Watkins Museum of History, left, at the corner of 11th and Massachusetts streets in downtown Lawrence.

The HRC heard nearly an hour of public comment from about 20 residents ahead of its vote, all but a few of whom were opposed to the project. Many commenters agreed that the building was too big for Massachusetts Street and that the project would be detrimental to the character of downtown and the neighboring historic buildings. However, Downtown Lawrence Inc. Executive Director Sally Zogry said that a majority of the organization’s more than 200 member businesses were in favor of the project because dense residential development and additional retail space would be beneficial.

The project also requires special use permits, some of which have received preliminary approvals, but McCullough said the project could not move forward without the Certificate of Appropriateness and an approval related to the downtown design guidelines. He said the most recent appeals related to downtown buildings involved aspects of the apartment and retail building at 888 New Hampshire St. and of the Marriott TownePlace Suites at 900 New Hampshire St.

For 888 New Hampshire St., the commission determined that the project did not have to meet the guidelines for building setback and parallel parking, which do not allow angled parking on New Hampshire Street, according to information McCullough provided to the Journal-World. The Marriott project, following an appeal, ultimately provided new drawings and returned to the HRC for a reevaluation of multiple certifications, including downtown design guidelines and Certificate of Appropriateness. The HRC decided that the revised project met the design guidelines, but it denied the other certifications. The City Commission ultimately approved the project.

McCullough said that Core Spaces’ appeal of the HRC decision would be placed on the City Commission’s agenda later this month but that it would be deferred to the commission’s May 7 meeting so that it could be considered in tandem with the special use permits the project requires.