With denial of controversial downtown apartment plans, mayor says developer will need to start over 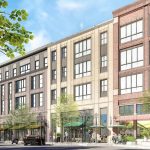 This conceptual rendering, dated Feb. 15, 2019, shows a revised design for the Hub on Campus apartment and retail building proposed for the corner of 11th and Massachusetts streets in downtown Lawrence. This view, facing east, shows the Massachusetts Street side of the building, which would be visible from the opposite side of the street near Watkins Museum of History.

A day after the Lawrence City Commission put a stop to a controversial five-story apartment and retail complex in downtown Lawrence, the developer’s future plans for the site are not clear.

Lawrence Mayor Lisa Larsen told the Journal-World Wednesday afternoon that she has not heard from Chicago-based developer Core Spaces since the commission’s vote early that morning to deny issuing the project the necessary certifications to move forward.

But if the company does still want to develop the land at the northeast corner of 11th and Massachusetts streets in downtown Lawrence, it will need to start all over, Larsen said.

“At this point, we would require the applicant to file a whole new plan,” Larsen said. “They are starting back over at square one.”

Shortly after 1 a.m. Wednesday, the commission unanimously denied issuing the company a certificate of appropriateness to build the Hub on Campus development and determined the project did not meet downtown design guidelines. The commission also unanimously denied the demolition of structures at the site and denied special use permits for the project. In their decision, commissioners cited the local Historic Resources Commission’s earlier decision to deny the two required certifications.

If Core Spaces does come back with another proposal for the site, the developer would likely need to offer a new project plan that the Historic Resources Commission would support and then get final approval from the city commission.

Additionally, the company may need to win over an avalanche of Lawrence residents who spent hours at the meeting expressing opposition. While some speakers suggested they would like to see the long-vacant lot developed, they argued Lawrence should not approve any project just to get it done.

“We are a jewel of our state,” resident Umut Bayramoglu said of the Lawrence community during the public comment period of Tuesday’s meeting. “We don’t have to say yes to everyone who wants to do something. We can wait for something better. We can build something better.”

The plans for the project called for two buildings to stretch the width of the block between Massachusetts and New Hampshire streets and included 610 bedrooms targeted to college students. The primary building would have been the five-story apartment building with ground-level retail space along Massachusetts Street, and the secondary building would have been a three-level parking garage and mixed-use structure on the east side of New Hampshire Street.

Due primarily to the main building’s height and size, the historic preservation board denied the certifications. Core Spaces then appealed that decision to the Lawrence City Commission.

During the meeting, representatives for Core Spaces asked the commission to consider the project’s potential economic benefits to the downtown area. They also argued the height of the proposed building is comparable to other buildings that already exist in the downtown area: specifically, the buildings on New Hampshire Street housing the 901 Lofts and 888 Lofts apartments and the Marriott TownePlace Suites hotel.

Some residents also commented in support of the project, arguing it would benefit downtown businesses and the Lawrence economy.

After hearing the comments throughout the meeting, Larsen asked whether the developer would be willing to work with the Historic Resources Commission to create a new proposal that met the board’s guidelines. Rodney King, Core Spaces’ senior vice president for development, told the commissioners the company would be willing to work with board to find a solution. Larsen said she would prefer to send the project back to the board rather than denying the permit outright.

One commissioner, Matthew Herbert, said he thought the project shouldn’t move forward until the city had completed its new downtown master plan, but Larsen noted the commission may not have legal authority to deny the request on those grounds.

In contrast, commissioner Leslie Soden said she thought the other commissioners were making the issue too complicated and that upholding the Historic Resources Commission’s ruling was the obvious course of action.

“I see this as a simple vote,” Soden said. “I’m here to uphold the HRC’s decision. It’s very simple to me … That’s all we need to do.”

Commissioner Jennifer Ananda also said she would uphold the board’s finding, but she also said the design guidelines for historic districts should be rewritten and argued that the vagueness of the existing guidelines “made it impossible” for the developer to comply with them. Herbert said he too found the guidelines vague and he believes they could be reconsidered during the crafting of the downtown master plan.

After hearing from Soden and Ananda, Larsen said that because there would not be a consensus to send the issue back to the preservation board, she too would uphold its ruling. Herbert and Commissioner Stuart Boley soon followed, and the commission voted unanimously to deny the appeal and the permits.

Along with comments against the project, audience members shouted from their seats to admonish the commision for the way the meeting was handled. Some said Core Spaces representatives spoke about their project for about an hour when the commission initially gave them only 30 minutes to speak.

David Brown, a Lawrence attorney with an office located next to the development site, told the commission he was disappointed that the audience had to wait for hours, late into the evening, before they got the chance to speak out.

“It was well known the attendance would be huge and to make people wait four hours to talk … is certainly an issue about due process rights,” he said around midnight, noting there was not enough seating set up for the audience. “The fact that people are still standing now (several hours) into this meeting is obnoxious.”

When asked about the criticism, Larsen said the meeting followed the commission’s normal procedures and she was pleased with how it played out.

“The level of civility was a little concerning at times but under the circumstances, I think we did the best we could,” Larsen said. “I appreciate the engagement from the citizens and I would ask that we move forward in a civil manner on these types of items.”

The Journal-World reached out to Core Spaces for comment about Tuesday night’s meeting but had not heard back as of late Wednesday afternoon.