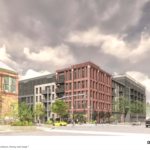 Plans to build a six-story apartment and retail building on the northeast corner of 11th and Massachusetts streets will continue to be discussed at City Hall, but the city’s historic preservation board has major concerns with the building’s size.

Members of the city’s Historic Resources Commission on Thursday night said that they agreed with city staff’s assessment that the project’s height and scale do not reflect the character-defining patterns of the downtown district. However, rather than denying the project, the commission voted to defer its decision until its Architectural Review Committee gives the project another review.

HRC member Matt Veatch said he did not think the project would be able to get the required certificate of appropriateness if its size remains the same as currently proposed. Veatch said that for him, it was the building’s overall size more than its height.

“It’s that single line of six floors going halfway down the block that’s just out of character,” Veatch said. “It will overwhelm three of our most significant buildings.”

The project is located in the Downtown Conservation Overlay District and the environs of three historic buildings: the English Lutheran Church, the Douglas County Courthouse and the former bank building that currently houses the Watkins Museum. The project must comply with the city’s downtown design guidelines, and a certificate of appropriateness will be required for it to move forward. Ground-level townhomes proposed for the project will also require a special-use permit.

Chicago-based Core Spaces filed plans last month at City Hall for the project. Plans call for the building, called Hub on Campus, to have about 235 apartments with a total of about 675 bedrooms. The building would stretch from the corner of 11th and Massachusetts streets to the corner of 11th and New Hampshire streets, with a covered space left for the alley and some ground-level townhomes along New Hampshire Street. A proposed parking garage would be on the east side of New Hampshire Street, next to the Old English Lutheran Church building.

HRC member Kelly Erby agreed with Veatch, saying that the way the building competes with the courthouse and the Watkins building is not acceptable. However, because the commission agreed to send the project to the ARC to work on some design changes, such as changes to the façade, setbacks and balconies, the board decided to defer its vote on the certificate of appropriateness.

Still, those leading the project did not sound very willing to make the building any smaller. Core Spaces Executive Vice President of Development Chad Matesi told the commission that the company has already taken a great deal of mass off of the building at the city’s request, and that the project is at its “breaking point.” He said while the building’s design is flexible, they wanted to maintain the size.

“We are more than willing to go back to the drawing board and work as hard as we can on (the design) to have it fit in better,” Matesi said. “But when it comes to the proposed bulk, height, density, we don’t have much more wiggle room.”

Representatives from the Lawrence Preservation Alliance, the Douglas County Historical Society and the ownership group of the church, which was the subject of a historic preservation battle decades ago, said they were opposed to the project. All said the height and size of the project was detrimental to the nearby historic buildings.

Dennis Brown, president of Lawrence Preservation Alliance, said that the corner of 11th and Massachusetts streets is underutilized, but that this project is not the solution. Brown noted several issues with the design, but said that the biggest problem is the scale of the project. He said that the historic buildings that have anchored that end of downtown should continue to be the predominant structures.

“For a new kid on the block to come in and be the most massive structure with those three significant historic structures is just wrong,” Brown said. “It’s not something that Lawrence should support.”

Once Core Spaces meets with the ARC, the amended plans will go back to the Historic Resources Commission for consideration. If the commission ultimately denies the certificate of appropriateness, Core Spaces can appeal that decision to the Lawrence City Commission.