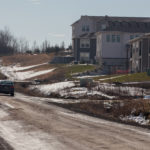 A judge has denied a homeowner’s request to temporarily halt the controversial Queens Road reconstruction project in order to hear a lawsuit that claims the taxing districts set up to fund the project are illegal.

In January, Kurt Schaake, a homeowner in the taxing districts, filed a lawsuit against the City of Lawrence in Douglas County District Court claiming that the taxing districts are arbitrary and capricious and therefore out of line with state law. An initial hearing was held in February, and Schaake’s attorney requested a temporary injunction to delay the project so the lawsuit could be heard.

To date, the city has been voluntarily putting any action related to the taxing districts and the construction project on hold pending Hanley’s decision regarding the injunction request, as the Journal-World has reported.

City Attorney Toni Wheeler said Wednesday in an email to the Journal-World that the city is pleased with the court’s decision. In response to what the order means for the Queens Road construction timeline, Wheeler said the city was still evaluating the decision’s impact on the Queens Road construction timeline. Wheeler did not immediately respond as to whether the city will continue to voluntarily put all actions regarding the project on hold at this point.

More specifically, the order states that the motion for an injunction must establish a “substantial likelihood” of eventually prevailing in the case. Pursuant to case law, four additional requirements must also be satisfied: a reasonable probability of suffering irreparable future injury; the lack of obtaining an adequate remedy at law; the threat of suffering injury outweighs whatever damage the proposed injunction may cause the opposing party; and the impact of issuing the injunction will not be adverse to the public interest, according to the order.

The order states that because the lawsuit failed to satisfy the first of the five requirements, a substantial likelihood of succeeding on the merits, the court therefore declined to consider the other four requirements. It goes on to state that the city’s method of determining which properties were included in the districts did not violate the law.

The Queens Road street project is estimated to cost about $4.83 million, of which the city will contribute about $640,000. There are about 400 properties in the Queens Road taxing district, which will contribute toward the remaining $4.2 million in proportion to the square footage of their parcel, according to the order.

The Queens Road intersection project is estimated to cost about $450,000, all of which will be assessed to properties in the taxing district. There are about 515 properties in the intersection district, which includes the 400 from the street project district. The property owners will contribute toward the cost of the project in proportion to the square footage of their parcel, according to the order.

The order states that absent a showing of fraud, arbitrariness, or caprice on the part of the city government, the mere shape of an improvement district, alone — even if it could be drawn differently — is not enough to establish that the improvement district is illegal. The order states the city provided reasons for why each area was included, including direct and indirect access to Queens Road and whether each area had previously been included in a district for another street in the area.

The order goes on to state that while the plaintiff has argued that the city might have drawn the boundaries differently, no evidence has been produced that would show the city established the boundaries through fraud, arbitrariness or caprice. The order notes the decision addresses only the injunction request and does not conclude the matter, and that the homeowner’s lawsuit remains pending.

The order directed the parties to contact the court to schedule future hearings, but so far no hearings have been scheduled. Hird did not immediately return a phone call from the Journal-World Wednesday afternoon.