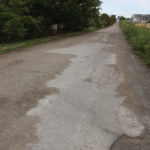 This August 2018 file photo shows the thin pavement and potholes that are prevalent on a portion of Queens Road north of Sixth Street.

After years of discussion, who will be paying for improvements to ailing Queens Road will soon be settled.

At its meeting Tuesday, the Lawrence City Commission will hold a public hearing for the two benefit districts that will pay to reconstruct Queens Road, one of which will add thousands of dollars to the tax bills of some northwest Lawrence homeowners and commercial properties. Following the hearing, commissioners are scheduled to vote to establish the two benefit districts and order the improvements to be completed.

The debate about who should pay for Queens Road began in 2009, and over the past several years, the commission has debated the boundary lines of the two benefit districts and how much the city at large should contribute to the road project. One of the districts will pay for adding a stoplight and other improvements to the intersection of Queens Road and Sixth Street; the other district will pay for the multimillion-dollar reconstruction of the road north from Sixth Street.

The benefit districts have been controversial in part because some homeowners have said that when they bought their homes, they were not aware they agreed not to protest the benefit districts. Developers are generally responsible for paying for the new infrastructure — water lines, sidewalks, streets — that their developments require, and the no-protest agreements were established when the neighborhoods near Queens Road were planned years ago. The agreements run with the land, and would be disclosed on titles and other paperwork.

Another main complaint of homeowners has been that there are already other access roads to get in and out of their neighborhoods, and they don’t feel that they directly benefit from the reconstruction of Queens Road. The formerly rural road — a pothole-riddled, gravel and asphalt sealed road with open ditches for drainage — is meant to be a main roadway in the area, and it runs though millions of dollars of new development.

The commission had previously contemplated expanding the Queens Road benefit district in an effort to spread the costs among more property owners, including city-owned and commercial properties. That suggestion was not popular with those homeowners who weren’t originally in the proposed district.

On Sept. 4, after reviewing three options for the boundaries, the commission voted not to expand the benefit district as previously contemplated. Instead, it voted to increase the city’s contribution to the project by about $290,000, or roughly the equivalent of what two nearby city-owned properties — the future police headquarters site at 5100 Overland Drive, and a water tower site at Sixth Street and Stoneridge Drive — would have paid if they were included in the benefit district.

• Queens Road from Sixth Street to Eisenhower Drive: The road reconstruction project is estimated to cost $4.85 million. In addition to the $290,000 city contribution, the city will pay to add multiuse paths and bike lanes along the roadway for a total contribution of $638,250, according to a city staff memo to the commission. The proposed benefit district only includes properties north of Sixth Street, including properties along portions of Eisenhower Drive, Rock Chalk Drive and Fort Benton Drive, among others. A map of the proposed Queens Road benefit district is available on the city’s website, lawrenceks.org.