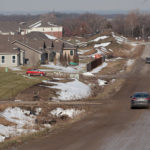 Whether the multimillion-dollar reconstruction of Queens Road will be postponed so a lawsuit against the city can go forward is now in the hands of a judge.

At a hearing in Douglas County District Court on Monday, both sides laid out their case as to whether the controversial taxing districts, which go toward funding the $5.3 million road project, should be delayed so the lawsuit can be heard. In January, homeowner Kurt Schaake filed a lawsuit claiming that the taxing districts, under which property owners near Queens Road would pay most of the cost of the improvements, are out of line with state law.

Schaake’s attorney, Richard Hird, requested Monday that Judge Amy Hanley order a preliminary injunction until the lawsuit was resolved. Hanley said in order for her to do so, Hird must show that the case is likely to be successful or has a “substantial likelihood of prevailing on its merits.”

When Hanley asked Hird what would allow the case to prevail, he listed four major elements. He said that the city didn’t determine what special benefit accrued to properties within the districts; that the city improperly excluded properties; and that the properties within the districts were not benefited in equal relation to the financial burden imposed. He said the city’s districts were therefore arbitrary and capricious and out of line with state law.

“There is a general recognition that Queens Road needs to be improved, but the question is, is this the right way to do it?” Hird said.

The city is asking that Hanley deny the injunction request. Deputy City Attorney Randall Larkin told Hanley that Hird had not shown a substantial likelihood of succeeding in the case. He said the city was vested with wide discretion in determining the taxing districts and that it was Hird’s burden to show that the city had abused its discretion. Larkin also said properties benefit because the project will improve connectivity and travel for both motorists and pedestrians in the area.

One of the things Hird took issue with was the uneven shape of the district and the city excluding some properties because they have been part of previous benefit districts. Larkin said that the city used two criteria when determining whether to include a property: whether the property had access to Queens Road such that it would accrue a benefit and whether or not the property had already been in a taxing district for a street that was parallel to Queens Road. Larkin said those exclusions led to the district being narrower in some places.

“The mere fact that it’s oddly shaped, without any evidence of fraud, isn’t enough evidence that the district is illegal,” Larkin said.

Two benefit districts will fund the $5.3 million Queens Road project: one that funds the $4.85 million reconstruction of Queens Road itself, from Sixth Street to Eisenhower Drive; and another that funds $450,000 of improvements to the intersection at Sixth Street and Queens Road, including the addition of a traffic signal. The city is going to pay about $640,000 toward the project, or about 12 percent of the total cost of the road and intersection.

Hanley said that because both sides had brought up some additional issues, she wanted them to submit additional filings to the court. She said once those briefs were filed, she would make a decision. The city had previously agreed to voluntarily delay the finalization of the benefit districts until the injunction hearing and agreed to continue the voluntary temporary restraining order until Hanley reaches a decision in coming weeks.