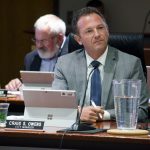 The City of Lawrence has officially welcomed new City Manager Craig Owens aboard.

Owens began his employment with the city on Monday, and Tuesday was his first City Commission meeting. Owens replaces Tom Markus, 68, who retired after about three years as the city’s top administrator.

“It’s just great to have you aboard,” Larsen told Owens. “It’s something we’ve been obviously waiting for for some time. I know it’s been a lot going on for you, trying to transition, but we’re really looking forward to it.”

The commission hired Owens in April following a national search that yielded 24 applicants. Owens joins city staff in the midst of the commission’s 2020 budget process, and approximately two weeks after Markus presented his recommended budget to the commission.

Owens said at a public meeting in April that he planned to spend his first 30 days immersing himself in the community. He said that would include spending time in each city department, meeting with small groups of city staffers and individually with commissioners, among other activities such as sleeping in a fire station and going on a ride-along with police. The next phase of his plan will be spent talking to additional constituents and assessing city operations, which may or may not lead to adjustments. He’s said he will publicly report his observations after the first 100 days.

Owens, 50, has been in city management for 25 years and has held positions in the cities of Rowlett, Texas; O’Fallon, Ill.; and Hazelwood, Mo. Owens is a graduate of the University of Kansas Master of Public Administration program and an International City/County Management Association Credentialed Manager. He previously received his Bachelor of Arts degree from Knox College in Galesburg, Ill.

Following the meeting, Owens said that so far he has met with assistant city managers and has begun to meet individually with commissioners to get their feedback. He said he was excited to start getting a feel for the dynamics of the community.

“It’s exciting because I know this is going to be a place where a lot of things happen,” Owens said.

• May 26 — Incoming city manager faced tough situations in Clayton, other roles in the region